12 Hours on a Sleeping Bus from Nha Trang to Hoi An! 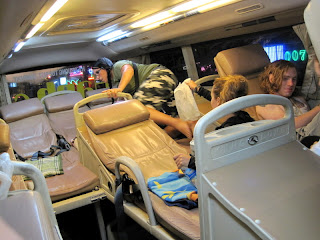 “Be prepared for a long journey,” warns the Lonely Planet guidebook, “As the twelve-hour bus ride between Nha Trang and Hoi An is typically described as “prison” or “hell”.” 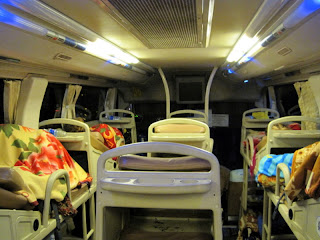 k at these photos of the “sleeping bus”… It’s like you’ve tragically stumbled into a seething warren of dentist chairs from the 70s, ready to attack you!

There is a toilet, but it is locked and chained with a sign that reads, “Not to use this toilet to keep its smelling away during your long trip.” 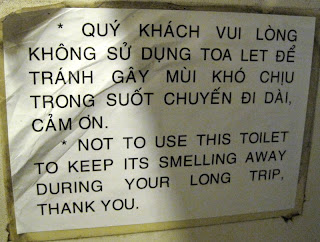 Luckily, the bus lurches to a stop every three hours of the bumpy journey to allow you to relieve yourself in a hole in the ground in a shed, and perhaps buy some Pho or (what is Southeast Asia’s obsession with these?) some Pringles.

Surprisingly, the twelve hours of the bus ride were lovely and sleep-filled. My friend and I tiptoed illegally into a stretch of five empty bed chairs, and thus had a luxurious expanse to sprawl out on. The four British lasses above us did not have it so lucky as one was running a high fever, and other had Whooping Cough of some variety, and the other two had food poisoning. Such is the traveling life! 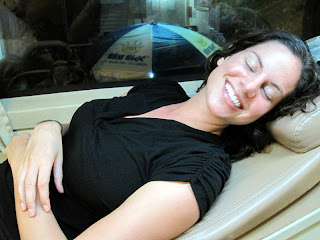 At seven am we sloshed into small and lovely Hoi An, and were sold directly for a commission to a perfectly nice hotel for $5 a night. Everyone on the bus staggered up to their new rooms and proceeded to re-sleep until noon, at which point the rain was still pouring down buckets. 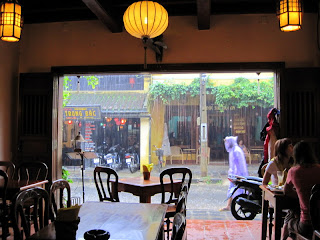 “Whoops,” I said to David, “I forgot that this was the town where a typhoon killed 41 people last month, and I forgot another one is scheduled to hit again soon.”

“I’ll book the ticket to Hue for tomorrow,” he said.

Looks like my custom-made silk Hoi An dress may never be birthed, but that $20 will be put to hearty other use eating my way through Hue :) Who needs silk dresses while backpacking, anyway? 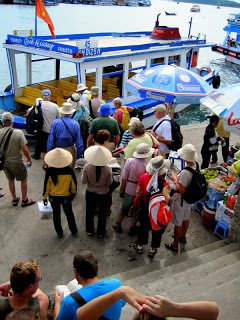 Anonymous said... Hi my name is Susie and I am a college junior looking into traveling southeast asia during my winter vacation. First off let me say that your blog is super entertaining. Blogs are great, they offer readers information that travel books usually leave out. So I found your blog through the STA website and I was wondering if you were traveling as part of the STA organization. I was looking into some of the STA tours for Southeast Asia. I was just wondering what your opinion was about them and if you think it would be worth my while to take part in one of them. Thanks. I look forward to your next entry! Happy travels!

Thanks so much for your comment! Though I booked my plane tickets through STA's very helpful agents, and though I write for them, I am not doing an actual tour with STA. That said, a good friend of mine did the 30-day "Indochina" STA tour and I tagged along for a week, so I have an idea of how they work.

In short, I think an STA tour could be a great choice for you if you're starting out traveling the world, as they're well-structured, but also offer freedom within the plan, and let you do things you couldn't do alone. That said, the pace of my friend's trip (and I think various others) is VERY fast: aka, they did in 30 days what I'm taking 2.5 months to see! If you travel Southeast Asia on your own, you will find it relatively easy, and will meet lots of other single travelers.

In short: hooray about you traveling, and whether you do the STA tour or not, I think it will rock :)

Happy voyages, keep reading the blog, and pass around the site to friends! :)

Luddy Sr. said... Did you realize that you slept with that big smile on your face?