A Sausagemonger, Two Cruise Captains, a Teacher, and Ko Lanta 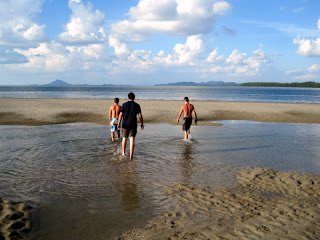 When I returned to my table from the cafe bathroom, a sausage-monger had stolen my seat.

“Oh, sorry!” said the British chap, “Were you sitting here?”

But the table was big, so we both could stay. Even when the gentleman’s two British friends arrived five minutes later, it was a comfortable fit.

“You’re kidding, right?” I said, when the man introduced himself as Dave and explained he created sausage for money.

“Oh no, not kidding at all!” said Dave. “Sausage is very big business in Britain.” 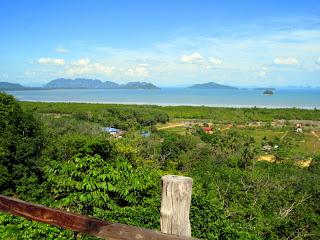 Incredulous, I flipped open my trusty computer and searched “The Great British Sausage Company”. Within two seconds I saw Dave’s name, along with hundreds of steaming close-ups of tubed pork.

“We sell merchandise, too!” Dave explained. “You can get T-shirts and mugs that say: I LOVE SAUSAGE.”

Amazing. It turned out that just a week ago, Dave was passing just another dreary evening outside an 80s rock club in London, when he ran into his childhood friend, Kim. They hadn’t seen each other in over ten years. 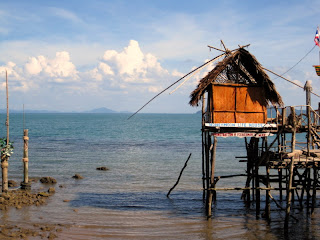 “We’re going to Thailand in three days!” Kim had said to him. “Drop everything and find the time and money to come!” And Dave did. Thus, we all found ourselves together across several oceans in a restaurant in Ko Lanta!

“Yeah, Dave is great to travel with,” said Nick (who everyone calls Denzel), “because his job is so damn interesting.”

“What we do is just boring in comparison,” said Nick. 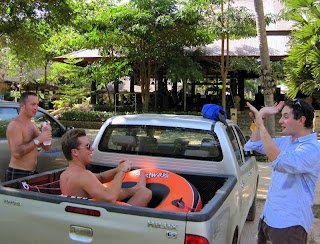 Nick looked down glumly. “We drive cruise ships around the world.”

I let out a good laugh.

At this point, the English owner of the restaurant, Richard, and his Thai wife joined us and gave us HIS fascinating life story.

The highlight of his tale was that one day, while walking on a beach in Britain, Richard had a vision: BOUNCY CASTLES. 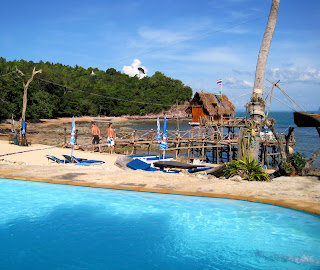 And thus he invested in two giant moonwalk castles, and was in this way able to milk thousands and thousands of pence off innocent little English schoolchildren.

“My son keeps wasting all his ten quid spending money on your stupid bouncy castles!” yelled one mother shrilly to Richard. But business is business. And now Richard is living in Thailand.

As we went to pay our bills, it came out that Dave (who everyone calls Luigi), Nick (a.k.a. Denzel), and Kim (who everyone calls “EthelRed the Unready” after the historically un-ready British King) had rented a pickup truck in Bangkok, thrown an inflatable pool in the back, and driven the entire thirty hours down to Ko Lanta. 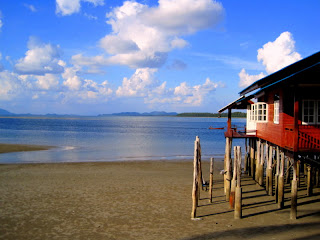 “They really look at you funny when you have two guys paddling in a pool while moving down the highway,” chuckled Nick.

“We’re about to take a spin around the island,” said Kim (or “Ethel”). “Want to hop in the pickup truck pool? We’ve got some great 80s mix CDs.”

And so I hopped into the truck but not the pool. The indoor seat was more shady and less sloshy. I was grateful for the chance to sightsee in this beautiful place with such hilarious company.

What a place Ko Lanta is! Stunning in scenery, not too built up, glowing with a peaceful Muslim and Buddhist community, and ripe with quirky tourist nooks. 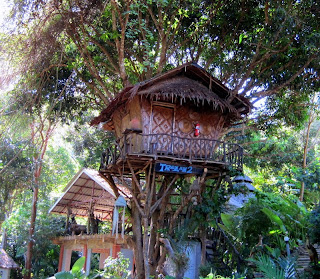 We found a resort where you could rent out tree house rooms! They let us use their ocean-looking pool if we bought juice, and we stared at the hut in the middle of the sea labeled “Fisherman Honeymoon Room”. The receptionist informed us that a French couple had it booked for two nights next week.

There was a monkey circus! We didn’t go in because we feared the monkeys might be maltreated and we would like it anyway.

There were so many vistas when we climbed hills! Ethel would bang on the window from his sunglasses-clad perch in the trunk pool and Denzel would screech to a halt for us to snap photos of the azure sea against the emerald greenery. 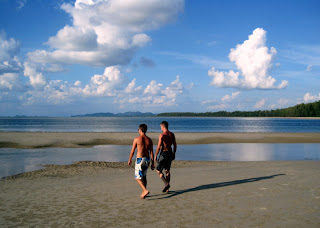 The coolest sight we saw was a beach in the north of the island where the silver surf had receded in bands to reveal stripes of sand dunes.

Nick and Kim tried to swim then walk then swim to the furthest sandbar while Dave and I guarded the stuff.

“Are you a’right there, Ethel?” we kept hearing across the expanse of silver.

“I’m just not READY!” would always be the reply. It never stopped being funny, even from a hundred yards away.

When the third speedboat nearly ran over the two men, we all realized we weren’t on a real swimming beach– we were on a boat motorway. Thus, we hightailed it for Long Beach further south. 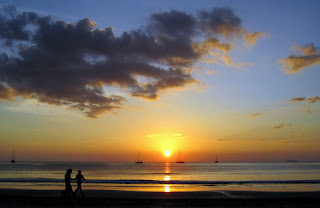 There we ate french fries, curry, and fruit with yogurt, respectively, while the sun did an absolutely glorious red dive into the sea.

A sausage-monger, two cruise ship drivers, and a teacher walk onto a Thai island…

…How does that joke go again? 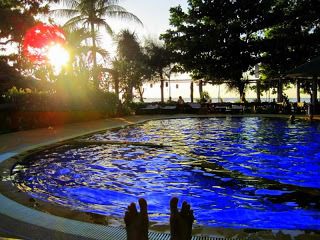 Why You Should Come to Ko Lanta if You’re Awesome
Read Next Post →
Click here to cancel reply.

Crazy...I also met a Brit on my travels that ran bouncy castles and I thought he was crazy at first. Who knew that the bouncy castles could be so profitable!

Fida said... You really seem to have a lot of fun on your tour! I am jealous! Well written too. Tks for the fun!

brian | No Debt World Travel said... Everyone has a interesting (if not amazing) story about

One of the reasons why I love travel...