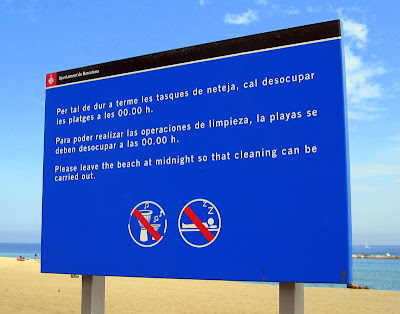 Look carefully at the icons illustrating the sign to the left, snapped on a rather chilly beach in Spain’s Barcelona.

Now ponder: How did the conversation go between the sign’s designers? Let us imagine.

“Hey, Julio, how do you figure we should represent the concept ‘Don’t party here all night?’ on this new sign we have to make?”

“That’s gross, man. What about a close up of booties shaking to music?”

“Now you’re on to something, Jorge… Music… But how do we represent exuberant party tunes blasting for all hours on a beach?” 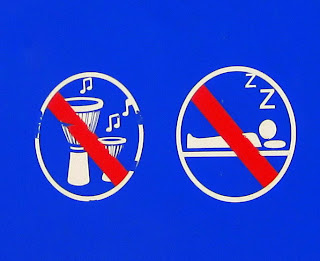 Side note: See how this sign is in Catalan, Spanish, and English? So are most signs in Barcelona! When there isn’t a translation, the single language is usually Catalan.

Previous Post: « 7 Ways to Battle Homesickness and General Melancholy
Next Post: A Warning About Your Dream of Visiting or Moving to Barcelona »