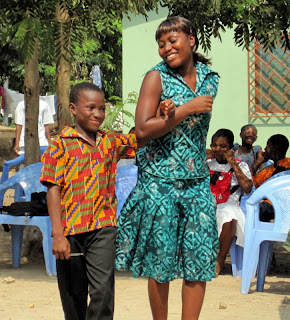 A delightful way for a teacher to be introduced to her future students is to attend an award ceremony celebrating their previous year.

It is scientifically proven that if a teacher comes into a classroom thinking about the talents and strong brains of her pupils, the pupils in turn will achieve greater academic success. We humans have a nice way of rising to high expectations, don’t we?

So huzzah and tra la la hooray that Dan and I arrived in Sogakope in time to attend the end-of-2009 party for Youth Creating Change! And three cheers of gratitude to the Austrian school pupils led by Marlies Klien that washed cars and sold baked goods all the way over in Europe to help YCC fund this ceremony each year!

When we awoke in the lovely, 70% finished YCC Guesthouse this morning, two canopied tents were already draped outside, bright blue chairs had been rented and assembled, and the first notes of joyful Ghanaian gospel reggae were already swirling through the speakers.

At one point, Collins had an electrical cord in his mouth, and before I could leap across the yard to keep him from frying, he had stripped off some outer layer with his teeth, pulled out two wires, and created a makeshift plug for a broken socket. Wow.

A little after noon, John raised the microphone and began the program! He gave all sixty or so people present a warm welcome, and laid out the program of events.

At exactly that moment, the electrical power went out, and the speakers shrieked and then died. 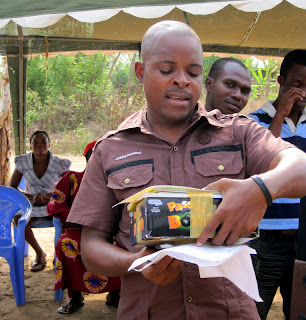 John (pictured, left) didn’t miss a beat. He lowered the mike as he raised his un-amplified voice to stand up to the rustling trees, and boomed on.

A rooster clucked through the middle of the dusty yard, impressed.

Hooray for the lovely Ghanaian gospel song by a student that came next, which roused us all to clap along! Then came an overview for parents of YCC’s different prongs in Sogakope: the library reading program, the cross-cultural group that will be traveling to London (!) in August, classes such as Computer Skills, and the penpal exchange with Boston and other cities of the world.

Across the next yard, the members of the Sogakope Evangelical Church began an amplified prayer song. It became a dramatic backdrop for each speech. 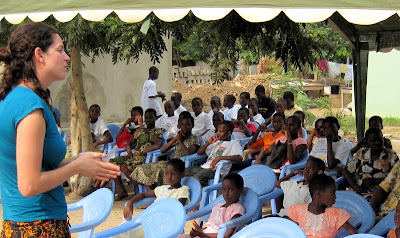 A giant, rattling truck trundled down the dirt road behind us and painstakingly dumped a mound of sand onto the heap at the construction site next door. John used his full lung power to project above the din.

And then (heart pumping fast here), Dan and I were called to make our speeches!

Dan rocked it out, thanking everyone present on behalf of Bright Star Vision, his mother, Backpacking Granny’s organization, which partners tightly with YCC.

Woo hoo! Then it was my turn to speak! “Speak SLOWLY, Lillie, SLOWLY!” I hissed to myself. “Even Americans have trouble understanding your racecar speech, and the Ghanaian accent is so different that enunciation will be key. All right, project your voice and get on out there, girl!” 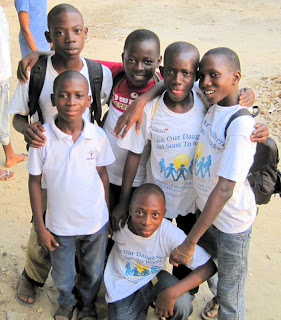 Here’s the gist of what I said…

“Three messages, from a teacher from America:

1. To YCC Students: Everyone always tells you that education is the key, and you think, “Sure, sure, whatever,” but here is the reality: there WILL come at least one moment in your life where, if you are educated, you will get something WONDERFUL. Maybe you will get a good job, money, an opportunity, or even a great girlfriend or boyfriend. But, unfortunately, if you are not educated at this crucial moment, you will LOSE. You will get nothing.

In six years of teaching, this is what I have seen, over and over. Education is everything! And so you are doing the right thing being here with YCC. Applause for yourselves! 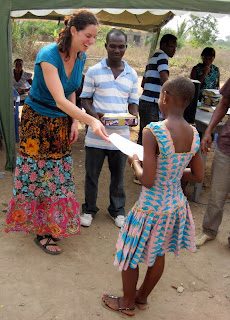 2. To YCC Families: We teachers may be very smart and very beautiful (fluffing my hair), but the truth is that YOU are the real experts when it comes to your children. This means that we teachers need your help and partnership to educate your child!

3. Everyone: I have been traveling around the world for six months now, through Asia, Europe, and now Africa, and want to know my favorite place so far? (murmurs and whispers) Ghana! Thank you all for being so kind, fun, and welcoming.” 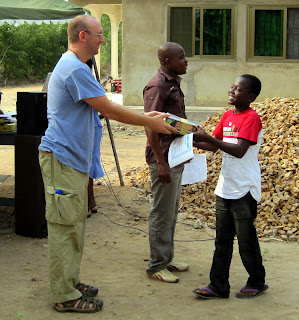 And then (after an awesome music and dance interlude) it was award time! One by one, John called the names of each student who had show particular excellence in a subject or trait. The students beamed as they were handed a fancy certificate and a big bag of reward loot: books, pencils, backpacks, board games… and even a baseball!

Now riddle me this: In a country where it is a horrible insult to hand someone something using your left hand, how do you juggle the certificate, a loot bag, and your handshake?? I botched it in every botch permutation possible when it was my turn to guest-congratulate!

Midway through, John paused and stared long and hard at the kids in the audience. 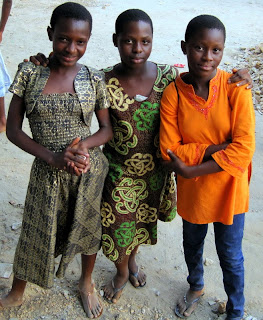 “I see some of you squeezing your faces now,” he said with a good-natured yell in his booming Ghanaian accent. “You are saying, ‘I should have gotten that award! Why did I not get that award?'”

Some students giggled and hid their faces in affirmation.

“But you have yourself to blame if you don’t have an award!” John continued. “You can’t earn an award if you’re not in class, or if you don’t work hard! This should be motivation for you to be up here next year.”

Ahhh– so many teacher speeches are the same in Boston as in Sogakope!

After the glory of the awards, tons of delicious yellow rice and fried chicken suddenly appeared. The guest chairman, a respected Ghanaian social worker, gave his closing remarks, and a party atmosphere broke out as the music and dancing started afresh.

Listen: Sogakope kids are the most polite, sweet, helpful youth I have met in my life. Whenever an adult tried to do something to clean up (ex: pick up wrappers), three kids would instantly appear and say: “Here, let me do that for you!” 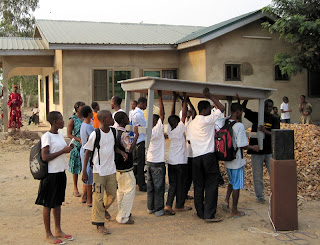 The trash was pushed into a pile in the back of the yard to burn, and five black, white, and gray bleating goats cantered over to munch into the remnants of our dinner amid the styrofoam boxes. Is it really true, I wonder, that they sometimes eat plastic? Dee-lish!

The most gorgeous demonstration of Sogakope teamwork and young ‘uns chipping in was during the removal of the massive wood table that had been serving as a podium.

Like a single ocean, the gaggle of kids hoisted the mammoth piece of furniture aloft and glided with it down, down, down the orange dirt road until they, I presume, returned it to the house or store from whence it had been borrowed.

“These are really good people,” I thought to myself as we all bopped to the music and snapped photos together.

And a plan was hatched… 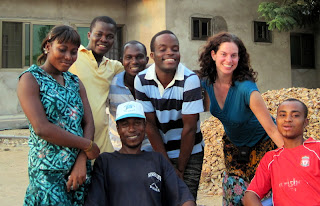 Over the three months that I’ll be teaching here in Sogakope, let us make a major project be for YCC students to write “slice of life” short memoir tales.

We can then publish some of these real life stories throughout this blog as the weeks go on, once permission is granted.

The stories of real people are what make travel, literature, and life sparkle, don’t you think?

Previous Post: « Where the Volta Meets the Ocean Meets Food Poisoning
Next Post: The Barriers in Flying Students from Ghana to Britain »