(Note: This is a seedy, spicy, shocking story that happened a few weeks ago in Laos, which I am only now at liberty to recount. Be assured, though, that the end comes with a wholesome lesson. The accompanying photos are utterly unrelated (sorry, but I couldn’t really have photos of the folks in this sketchy story!), and were taken tonight at the gorgeous Night Bazaar in Chiang Mai, Thailand: my current location.)

She stole his passport so he can’t return to his girlfriend in New Zealand!

I suppose we should have seen this coming. When I first met Tania, I clapped my hand to my mouth in shock. Crowded on our night-long bus behind leering Vietnamese and Lao men, the nubile Brit wore a tight blue top that exposed her entire midriff, replete with a sparkling bellybutton stud. She was no typical cargo-pants-wearing backpacker! 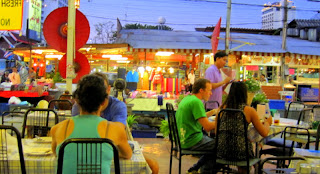 On her bottom half, Tania’s satin teal mermaid skirt hugged her rear and its slit slid high up her thigh. Tania’s arm (and then her whole body, as the bus journey wore on) wrapped around a young New Zealander named Ned.

“How old are they each?” I whispered to Jonathan, noting the contrast between Tania’s calculating eyes and Ned’s wide ones.

“Ha,” Jonathan replied with a grin, “When I first met Tania, she said she was 41. But once we started hanging out with Ned, she was suddenly 31.”

“Oh!” I said. “And Ned?” As I peered over, he disappeared under a reclining Tania. 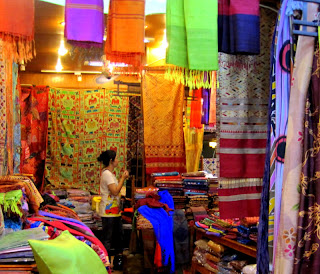 “Twenty-four,” said Jonathan. “And he has a girlfriend of five years at home. And he’s already cheated on her four times this holiday.”

Tania’s silken form pushed past me to the front of the bus. “Um, SIH,” she declared to the gaping driver in her British accent, “If y’ don’t stop this bus soon, I’ll ‘ave piss runnin’ down m’leg!”

Male jeering laughter ensued, followed by female screeches and threats. Needless to say, an hour later we were all squatting in the bushes by the side of the road. “Never again,” growled Tania, as she flopped back on top of both her seat and Ned. “This is really a bus ride for them men, innit? They don’t give a damn about us.” Ned mumbled something in assent and kissed her long waves of orange hair. 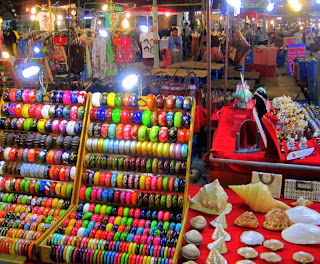 We pulled into a Lao town and began the search for a hotel for our clan. “You want room with two beds?” the soft-spoken Lao hotel clerk asked Tania.

“Ha, NO!” she laughed. “One big bed, y’understand? For to make the BOOM-BOOM!” She smacked her hands together and both the Lao boy and I turned bright red. I stayed in a different hotel than the happy couple.

In the morning we all reunited to go to the nearby waterfalls. Why reunite? Chalk it up to my fascination with ridiculous, literature-sized characters. The Lao tuk-tuk driver held up a map of two different waterfall options and asked us: “You want big one or small one?” 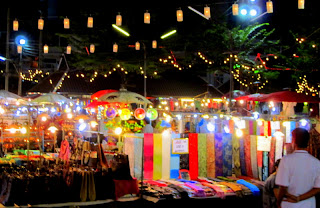 Given this classy prelude, it came to no surprise when the explosion came. Ned told his girlfriend back in New Zealand that he had been unfaithful– a week before she was supposed to meet him in Thailand. The girlfriend (of course!) flipped out and re-evaluated her entire past five years– and her plane ticket. Ned became morose and confused. Tania realized Ned was hung up on his girlfriend and might leave Laos to go find her. The next day Ned showed up late to our communal breakfast. 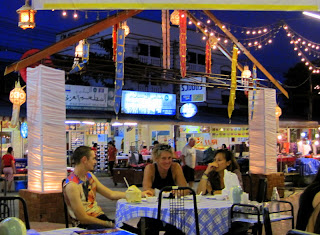 A strange smile played on Tania’s red lips. “Pity,” she said, “You’ll likely ‘ave problems crossing on to Thailand, then.”

Jonathan later confirmed that Tania had stolen the document while Ned was asleep, stuffing it deep amid her feminine care products.

At this point, the drama became all too much, and the rest of our makeshift group peeled off from the two loons. The last I heard of them, they were still traveling together, and have an appointment to get matching tiger tattoos.

I bring up this story because the whole debacle evoked numerous reactions in my melodramatic/feminist heart. 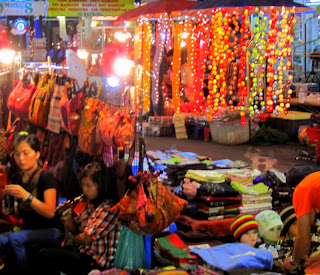 First, if you think about it, Ned somewhat deserved what he got, given that he so horribly deceived his love back home. His poor girlfriend wasted months (maybe years) of her life, when she should have just been set free.

Next, and a bit more twisted, I admit to being enthralled with Tania’s unbelievable personality. She said several times, “I am a man trapped in a woman’s body,” and indeed, it was strangely refreshing to watch the brazen hubris with which she took on the world. In the end, however, she offended half of Laos, entrapped a wide-eyed fellow almost half her age, and committed a federal crime.

When we travel so far from home, our hearts gape open. We are as vulnerable as ripe tomatoes.

When we travel, we are also freer: freer to utterly change who we were (even our age!) and how we interact with the world. 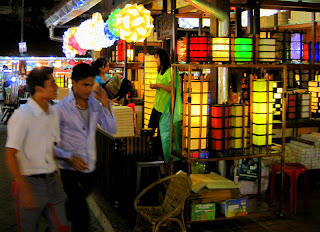 Who would know, back in Britain, that a respectable bank manager was cavorting around Southeast Asia in a satin belly shirt?

All right, Spiderman fans– are you ready?

The moral of this story is this: With great freedom comes– you guessed it!– great responsibility. May we exercise it well while we travel (and at home, too, for that matter!), and may we be kind to ourselves and to others, even if no one will catch us if we’re bad.

Tweets that mention â€¦And Then the British Lass Stole his Passport | Around the World "L"! -- Topsy.com

[...] This post was mentioned on Twitter by Debbie Kelly and Rishe G. Rishe G said: Part 2: It gets better... RT @WorldLillie: Insane #travel #drama AFTER the bus ride: http://bit.ly/hUVFBn [...]

Hahaha! This was so funny! The only part I would disagree with was your judgment of Ned "somewhat" deserving the crazy Tania. He TOTALLY deserved her! Cheating on his girlfriend 4 times . . . in spite of his young age, I don't believe that he's the wide-eyed innocent sort. What a pair of losers. But you did a really good job of retelling their story!

Wow that story gave me shivers.

Franny said... I like the part about the federal crime. :)

darngooddigs said... I guess that can be part of the allure of travel - it can put us in situations we might not be in back home, and introduce us to people we might not meet otherwise. But then we know we're just traveling... and then, just like in your story, the group goes its separate ways.

Tania does not sound like a person taking on the world. She sounds like a whack job. So is Ned going to 'miraculously' find his passport when its time to head to Thailand?

This is another reason your passport does not leave your BODY. Mine was always in my front hip pocket. Never in a bag out of my reach.

Joanna said... Whooo-ee, Tania does indeed sound crazy. Though it sounds like having his passport on his body might not have been enough for Ned to keep it in his posession (since it sounds like she had access to pretty much everywhere on his body...). I do feel worst for Ned's poor girlfriend here, she sure got the short end of the stick...