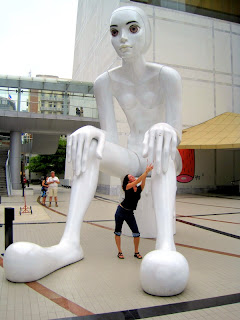 One of the visual “ohh!” elements of traveling through a Developing Country is seeing sleek modernity smack dab next to human decay.

Meandering through Bangkok today, four examples of this juxtaposition burst forth.

1. Insanely modern buildings (and sculptures!) cosied up to shacks and rubble. 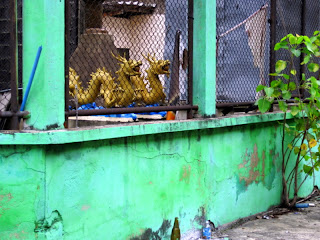 In the U.S. there are plenty of crumbling buildings, and certainly a shack or five thousand, but in a fancy business district in the U.S. you will rarely see two of those edifices kissing.

In Bangkok, however, you sure do. Just steps from a ramshackle street dedicated to greasily fixing car motors (with golden shrines glowing from the back of the black garages), we burst upon space-age Siam Square, with its totally insane modern sculpture of a white giant/alien and mammoth upturned trash can. 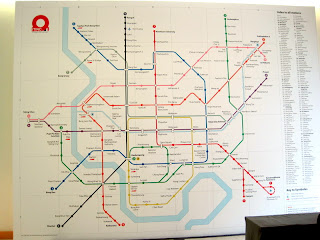 This was the most heartbreaking moment of the day. It literally knocked the wind out of me.

As we entered the Cultural Center behind the White Giant, we passed a beautiful subway map on the inside wall. (See top photo to the right.)

“Oh neat! It’s the Bangkok subway system!” I squealed, being a non-driver and thus a public transport groupie.

But then we realized… Bangkok does not have a hundred train stops like the picture. In fact, it has about ten, and those ten were just opened a few short years ago. 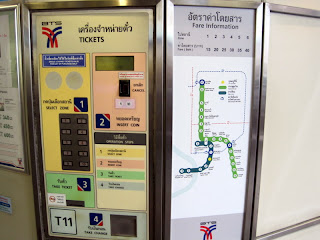 Sheesh– so this mural showed the subway that was in the process of being constructed? We looked closer… Ninety percent of the stations on the mural were subway stop names from other cities, like “Waterloo”.

We looked closer… An inset box in the bottom listed stipulations for the subway: “If there is no corruption,” said one. “Circle line closed when it rains, or wear plastic,” said another. Every comment was sassy.

Then we realized: this entire gorgeous subway map was a cruel joke– a tragic jab at what would lift this city out of its gridlock, but what would never, ever be– at least not for the next fifteen years. OUCH. 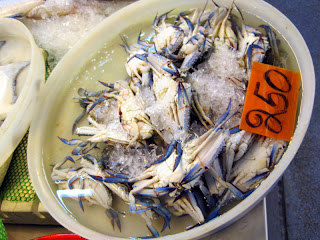 3. Live and dead animals: The strays and the markets. 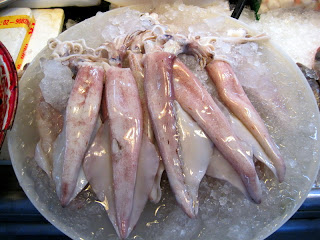 In the “Developed World”, we are so far from the animality of life: the grit and death of beasts.

In Bangkok, however, the market scene is alive and well, heaped high with squid and blue crabs. 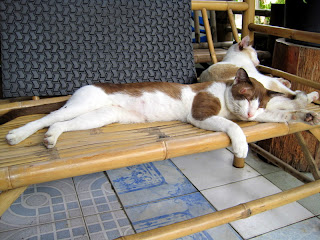 In the live beast realm, cats and dogs loll, utterly unsupervised, both inside and outside of human spaces. Sometimes disconcerting, but it’s also disconcerting to live a plastic-lined existence!

4. Oh, those terrifying mopeds amid the shiny rainbow cabs!

Picture your hand firmly grasping a bunch of stones. Your hand represents a Bangkok stoplight. The rocks represent the official Bangkok Meter Taxis. Now: pour seven gallons of water over your hand. Swoooosh… Notice how that water streams right past all the rocks and right through your hand? Yupporooni– that water is the exact image of how the thousand Bangkok mopeds weave right past all cars, traffic signs, 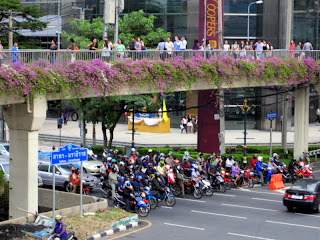 and pedestrians trying to cross at the crosswalk!

Watch yourself, pedestrian… the Thai government has invested in glorious pink taxis… but not in traffic law enforcement cops!

The picture with the rubber statue, is that a woman squating on a toilet?

Hah! Not sure... I think it's supposed to be an alien?