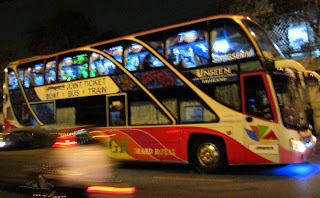 As I excused myself from dinner with new friends on Ko Phi Phi last night and passed out on my dorm bed at nine pm, I was pretty sure I had a case of dengue, and bad.

But back up: how did this achy American self get from Bangkok to Ko Phi Phi? Answer: through thirty hours on two trains and a boat. Here’s how it went down. 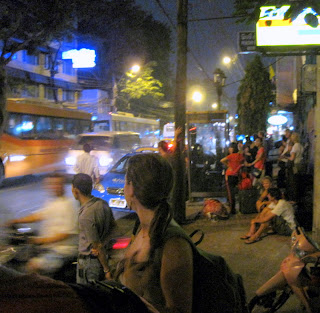 At six in the evening I showed up with my blue backpack at the Khaosan Road travel agent. For the next thirty minutes, the chubby tour agent in a giant white tee shirt walked me through the tourist ghetto of Bangkok like a chain-smoking pied piper, picking up backpacker after backpacker.

At the mouth of every hostel and travel agency we passed he hollered: “Krabi! Phuket! Phi Phi! Bus!” and five more Westerners joined us. By the time we were all plunked onto a spot on the wall next to a giant highway, we numbered over thirty.

Dozens of buses lined the curb across the highway, casting eerie red and yellow lights onto the rushing traffic below. Our group of thirty shifted from foot to foot, and after ten minutes finally plunked down our heavy bags and sat down on them. 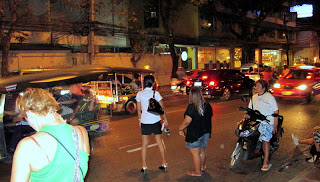 We had no idea what was going on.

To our left and right for blocks and blocks, we could make out hundreds of other tourist groups through the dark haze. Everyone looked confused as heck. An hour passed.

It became clear that the people in charge of us were the portly tee-shirted man, a totally sexy woman in mile-high stilettos and a mini-mini skirt, and a young Thai teen who clutched a chihuahua with a mother’s passionate love.

Every few minutes, these three overseers would yell into their cell phones in Thai or rush across the blazing traffic to the buses across the street. Mostly, however, they ate food off sticks, giggled, smoked.

Around eight at night we were led like a triumphant parade across the highway and onto a double-decker bus with garishly festive upholstery. Mercifully, the bus wasn’t overly crowded, and our seats tipped back enough to promise possibe sleep. 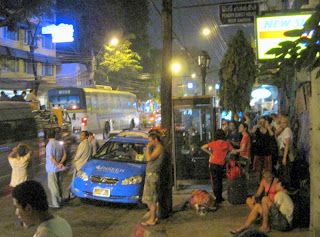 The engine growled to life and the movie “Fast and the Furious” kept us entertained for the first two hours. “V is for Vendetta” started afterwords and then flickered into darkness thirty minutes in.

The rest of the dark night we drifted in and out of a fitful sleep and pondered life.

Around midnight we squealed to a halt at a deserted roadside eatery. We ate fried noodles, though none of us were hungry, because it seemed like the right thing to do. Oil trucks rolled by on the otherwise empty highway. 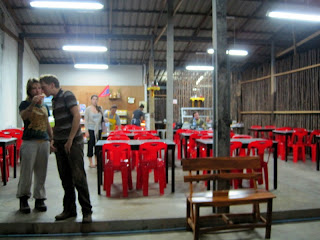 Back on the bus. I must have passed out because the next thing I remember is being woken at 5:30am by our arrival in dusty Surat Thani, where everyone headed to Krabi had to wait for their change of buses to come.

“You want direct or un-direct bus to Krabi?” the tour agent had asked me back in Bangkok. “Un-direct cost 100 Baht less.” 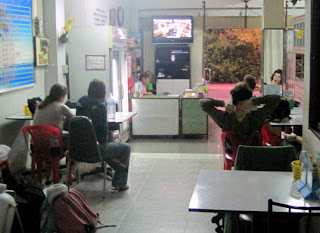 The travel agency in Surat Thani popped on “Borat” to entertain us Westerners while we waited, and sure enough everyone started to giggle and feel better. Nothing like Borat to soothe you at six in the morning!

Faster than I expected, I was piled onto a truck with my bag and we chugged around town picking up ten more tourists. We were ultimately dumped onto a packed, smelly bus, and the last five people were stuck sitting on the floor in front of the reeking bathroom. 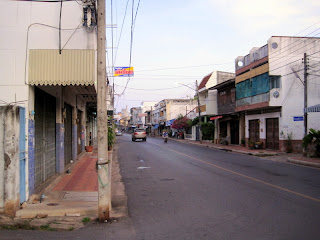 “We’ve been on this bus since Bangkok,” croaked a bedraggled Brit next to me.

“Could be a lot worse,” said an American former investment banker, “You should have seen the buses in India.”

Three hours later we were deposited in a travel agency in Krabi.

After an hour wait, we were off to the ferry to Ko Phi Phi! 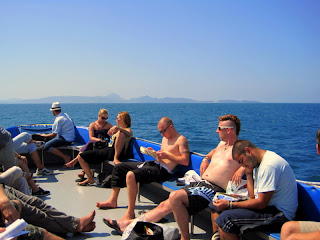 Now, a word about Phi Phi. I had been warned from many sources not to go there. “It’s a madhouse!” folks said. “It used to be gorgeous, but now it’s disgustingly overbuilt” said others. “You’ll hate it,” said one friend definitively.

But Phi Phi is one of those places I felt I just HAD to see before I fly out of Thailand in two weeks. And thus I discounted all the warnings and hopped on that ferry, breathing the salt air and taking in the stunning scenery.

What madness emerged once we docked? Stay tuned for the next article. 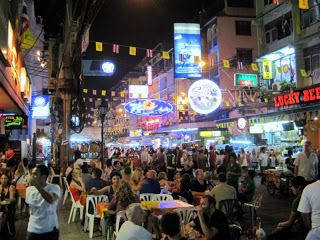 A New Update on Around the World!
← Read Last Post 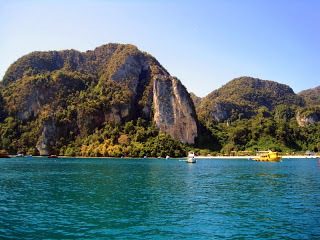 Sara said... Don't get Dengue Fever, Lil. Rest up! I've been to Kho Phi Phi and loved it. I got some people together and chartered a boat for the day, and we went out snorkling. Totally amazing.

Shawn said... aaaand she takes a pic of the dog instead of the totally sexy woman. Doh!

Sounds like quite a long game of herd the tourists. I hope Phi Phi ends up being worth it :) Too bad about V is for Vendetta though, it's quite a good movie.

brian said... Are you sure the totally sexy woman...was a woman????

Anonymous said... Could be Mono!

Lillie M. said... Hey all! Thanks for the comments! First, my fever is MUCH better since leaving Phi Phi, so that's good! Second, Shawn, the pic of the sexy woman is to the left of the dog pic, never fear! Brian, I have no answer for that... the ladyboy prowess in this country is astounding.

Finally, Sara, stay tuned for the upcoming articles on Phi Phi, but I think this will be a similar debate to the one about Lake Atitlan, Guatemala!