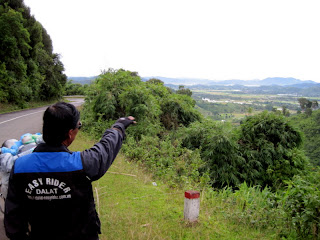 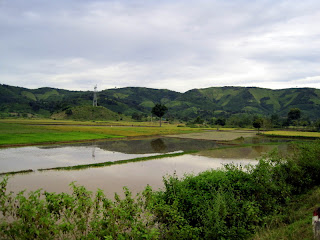 “You want do homestay for first night?” Lulu asked as we wound down the mountain road. We had left Dalat at eight in the morning, and it was now five pm. My motorcycle-sore rear and I said simultaneously, “Any bed is fine!”

On the edge of a mountain we pulled over and Lulu pointed to a sparkle amid the green far below. “Lak Lac down there,” he said. “ 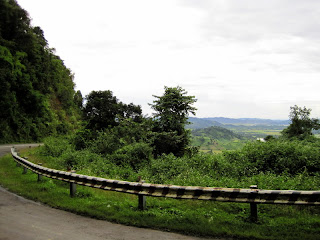 We go tonight there to sleep. 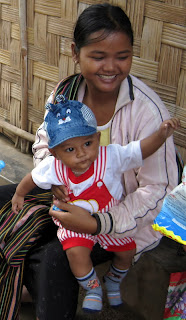 Third Ethnic Minority village we see today.” I nodded, exhausted from worrying about the motorcycle but heart full from the beauty.

As we chugged downward, the sun lowered, and the mountains turned richer and richer. Inside my thick motorcycle helmet I couldn’t help myself. I began to sing: “Oh beautiful, for spacious skies, for amber waves of grain! For purple mountains majesty, above the fruited plain! America, America, Vietnam looks like you!” 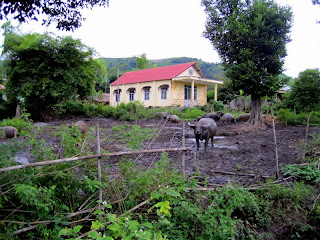 before Lak Lac so Lulu could push me towards a mud yard (pictured, right) and say, “Water buffallo! You take picture!” As I trudged towards the pen, carnage struck. 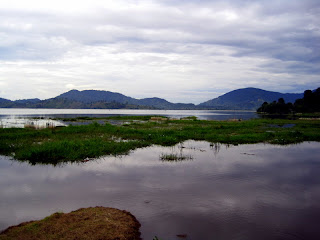 Down the rock-strewn dirt road we had been traveling on, an old motorcycle laden with three men came barelling along. Heat-tired and middle-aged, a dirty tan dog began crossing the road at the same time. The men on the motorcycle saw the dog and tried to weave right, but the dog saw the motorcycle and, dazed, ran in the same direction. BAM! 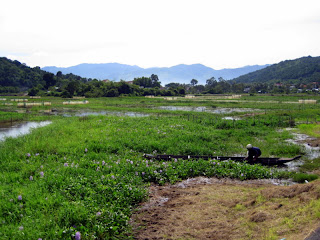 The sound as the motorcycle hit the dog was a sharp squeal and a rip. The dog’s body was whipped three hundred and sixty degrees around, ravaged on all sides by the spinning motorcycle wheel. The vehicle then ran over it with its back wheel as it raced onward, and the animal lay in a limp, bloody pile on the earth. 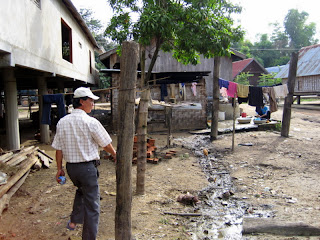 “Oh my God!” I yelled, running back to Lulu, “That motorcycle ran over that dog!” Lulu laughed. “Yes, that what happen. Dog not move fast. Happen always.” I put my hand to my heart and watched the villagers move the dog’s bleeding body off the road, then get right back on with their lives. My breath came fast. 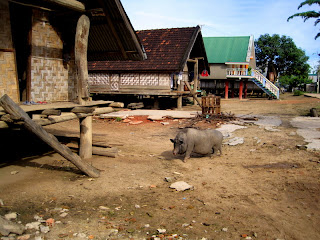 “For you,” Lulu said, “I will beep and go slow when dog try to run into us. I see you upset.” For the next few days, Lulu kept his promise and we narrowly avoided the thirty canines intent on getting under our wheels. 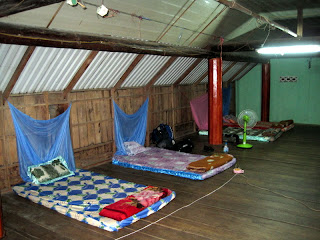 We reached Lak Lac as night fell, parked right in the middle of the lakeside Ethnic Minority village, and settled into an empty Long House. It wasn’t a homestay in the sense of staying in the home of a family, but rather it was a traditional style house of the village, 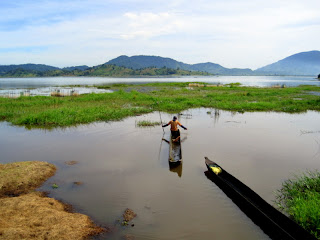 left open for the small but persistant tourists who come to live like the locals (but in a slightly more posh manner– see photo to the left of our nice mat beds) for a night or two. 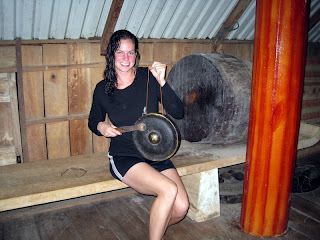 To educate the tourists in the guest house, several Lak Lac artifacts were scattered about the house, and Lulu directed me to photograph the wine jugs, authentic cooking pans, and (he shoved it into my hand and snapped a photo, left) a gong which is used by the villagers for heaven knows what. 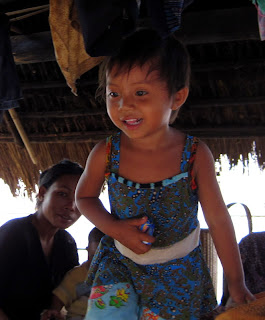 I had a fun time with the bathroom given that there was a tap for running water, 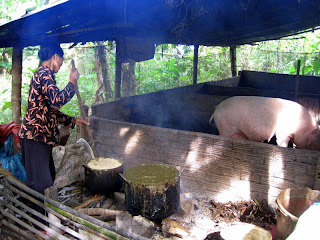 but none came out after the initatial spurt, and I’d already put shampoo in my hair. The remaining dregs our our water bottle came to the rescue. A giant pig oinked in approval from her feces-smelling puddle.

That night, snuggled beneath my blue mosquito net, I slept like sleeping was going out of style, passing out at nine at night and arising to the rioutous roosters at nine am. Twelve hours of sleep, and I could have done more! 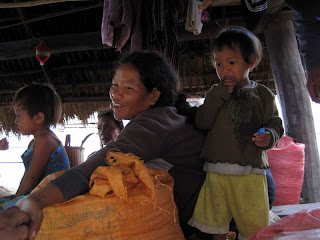 In the morning, we toured the village, Lulu doling out his trademark mint chocolate sucking candy, and the villagers shyly smiling and gobbling up the sweets. 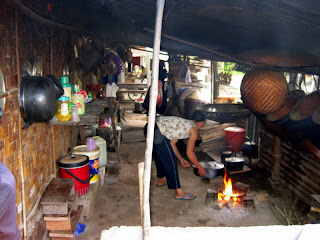 The sheer force of life and youth and birth and mud! Animals squalked everywhere, from bristly brown hogs to dancing chickens, and everywhere were BABIES upon BABIES upon BABIES. Ohhh, my twenty-eight year old woman’s self drank in those baby eyes with love and racing thoughts! “They need many baby to work in field,” Lulu explained. “If woman has no baby for her husband in some years, husband can find other woman.” 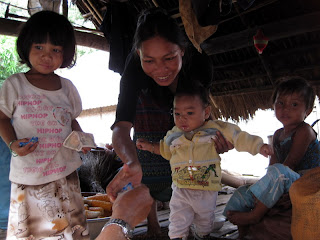 In fact, Vietnam overall is teeming with youth. According to the Lonely Planet guide, 60% of the country is under thirty years old! Vietnam is the thirteenth most populous country in the world, and growing like crazy. 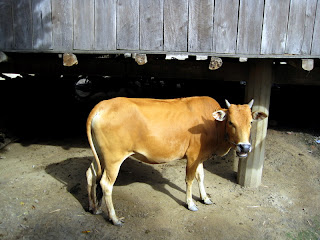 In Lak Lac, women stirred steaming pots of stew for the pigs (“leaf and rice,” explained Lulu), a middle-aged woman picked lice out of her mother’s long hair, and tiny puppies and kittens scampered about in the muck. The men were mostly in the fields with the rice, explained Lulu, 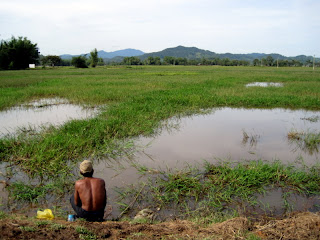 so the women and children were left to prepare food (a long and ardous task in these living situations!) care for the home and animals and cuddle each other. Several women wrestled to strap two limp-necked dead geese to a pink motorcycle to take it market. 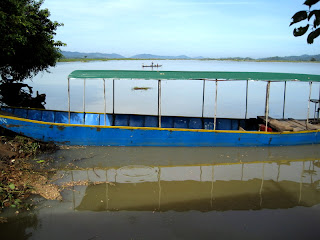 A group of fifteen pre-teen boys played ball and jeered at each other. A cow stared on with rich chocolate eyes.

At breakfast, I miraculously bumped into Shawn, the Australian penguin curator who I’d met two towns ago. We greeted each other warmly, and Shawn explained that he and his friend were taking the SIX day motorcycle ride to Hoi An! Their driver strummed a guitar and made up cheesy romantic songs in the background as we chatted. 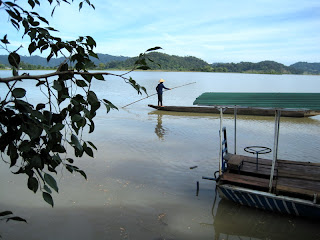 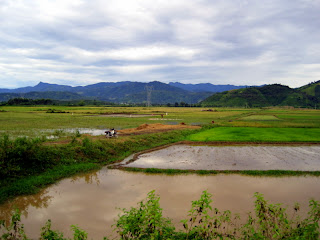 When I came back to Lulu and our fried noodles, my guide was seething. “That man say he ‘Easy Rider’ company but he lie. They copycat group. Not real Easy Rider!” Sure enough, Shawn’s driver had the same jacket as Lulu, but it was faded and clearly secondhand. I had been warned of copycat companies in Vietnam that, unstopped, steal the name of well-reviewed tour or hotel groups. I breathed a sigh of relief that I was with the real thing. 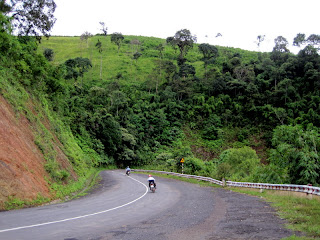 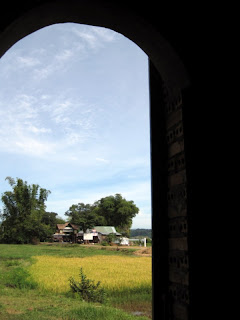 tipping the small teapot’s contents into my condensed milk and coffee grounds. Eww! And yet– (sip… thinking about it…) totally delicious!

To the road again for day three of four! On the agenda: four waterfalls, the capital of the Central Highlands, and high, high, high drama. Stay tuned! 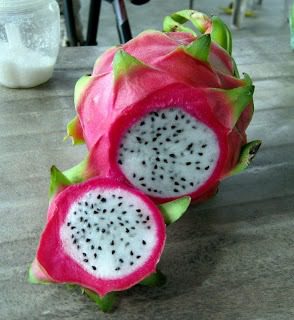 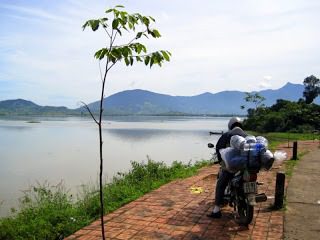 the kids are sooooooooooo cute!

Dave said... I feel silly admitting this, but I had *no* idea Vietnam had so many peeps! Nifty factoid.