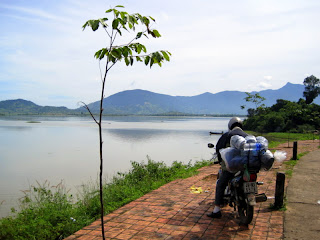 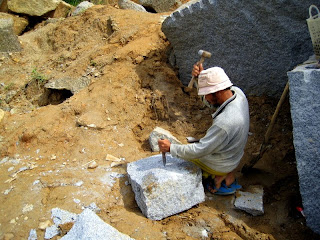 From Lak Lac, our motorcycle purred Northwest, towards the Vietnamese border with Cambodia. We were getting deep into the countryside, headed steadily towards the jungle and waterfall-filled Yok Don National Park.

One of the most touching moments of the trip occurred as we pulled over on a mountain shoulder near a towering heap of granite blocks. A lone man swung a weighty hammer over and over in the sun, and he finally looked up as Lulu approached him. 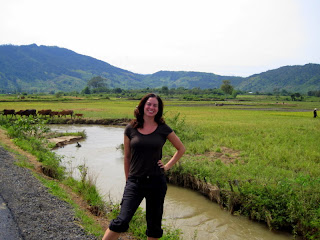 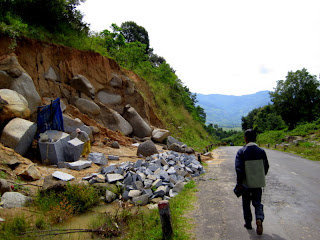 The man smiled. It likely wasn’t every day that a gentleman in a shiny blue motorcycle offered him an unscheduled snack break… and some international Paparazzi.

“This man,” explained Lulu to me, “Break over one hundred granite brick each day. Here, you take picture while he show.” I pointed questioningly to my camera and the stone-worker nodded enthusiastically. He deserves a little press, that’s for sure! 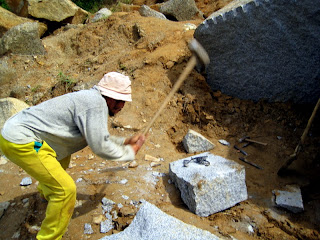 Step by stepm the granite worker showed us. First, there was a massive rock slab that had been broken 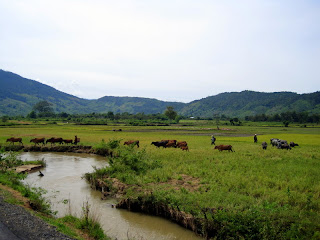 from the boulders by the side of the mountain face road. The man then took a chalk piece and drew a straight line. With a chisel, he hammered out a small hole in the middle of the line in the rock. Down to his tool pile he dipped then pulled a one inch wedge wrapped in dirty cloth. He stuck this into the small hole, then picked up his grand hammer. 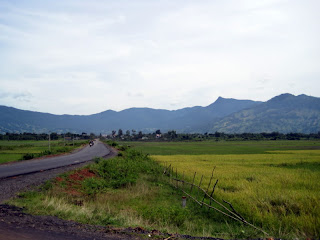 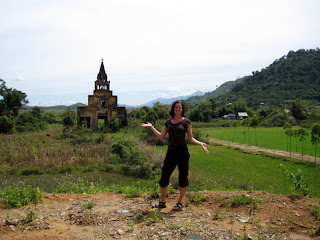 miraculously breaking the stone into two perfect halves. The mica sparkled in the sun and I gasped with awe and bowed down. The man beamed a proud, shy smile, and lit the cigarette Lulu had given him as we drove off.

We saw a decrepit but still glamorous Quaker church, hundreds of years old and silhouetted in its disrepair against the purple mountains. 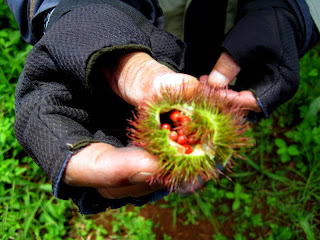 Mixed amid the hills and hills of coffee plants were other lucrative crops that Lulu pointed out. 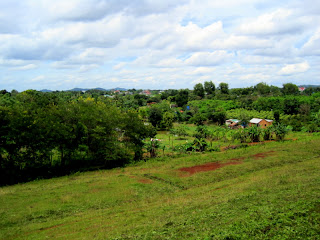 Paprika is apparently the juicy red seed in the hollow center of a spiky tree fruit! My guide broke a prickly orb open and pulled out the paprika pods inside. “Eeeii, NO!” I squealed as he tried repeatedly to smear the red on my face. “Why not?” he asked. “Many years Vietnam women use paprika for makeup.”

I successfully evaded Lulu’s lipstick application attempts and listened from afar as he explained, “In Vietnam, virgin very important. 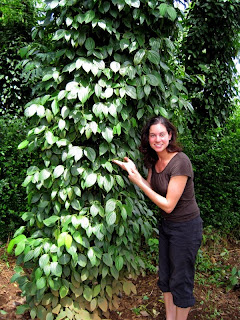 If woman not virgin, if she clever she hide paprika to put on sheets and pretend she bleed!” 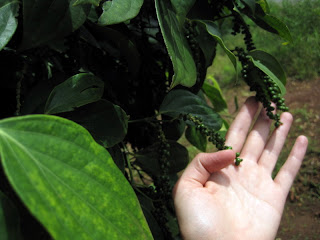 and I remembered that the hymen can be broken by all manner of physical activity before intercourse. Not only is the “blood on the sheet” thing ridiculous and offensive, it is inaccurate!

Next came the pepper vines. Black table pepper, growing on vines (pictured, right and left) on hills– who knew?! Lulu threw a green pepperling into my mouth and it was a firery shot of black pepper juice. Yipes! I chugged half the water bottle and was still burning. 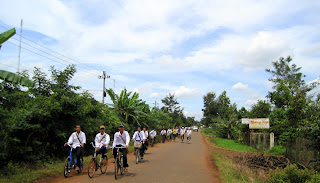 Then, fellow teachers of the world, get this: For the next thirty miles, the only other vehicles on the road were hundreds upon hundreds of rural 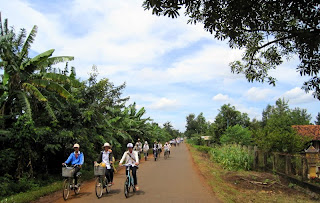 Vietnamese children biking to school, many clutching their red stools in their arms, assuring they would have a place to sit in class! The photos on the left and right look almost the same, but were taken after a space of time. 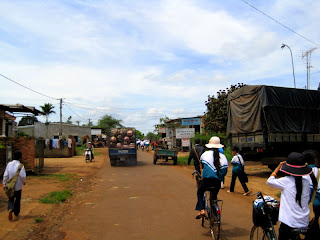 The parade of student bikers stretched on and on! My heart swelled with love as each child beamed and waved and tried (somewhat dangerously) to give us high fives as we moved. “HELLO!” they said, starting English class early. One added: “I love you!” 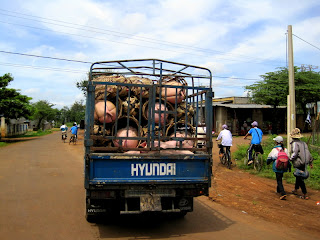 Ooh, the sights we passed on these rural dirt roads. Here is one (left and right): an open truck stacked with fat, oinking pink piggies! It took a while of staring to figure out what those rosy round things were, but soon I divined: pig bottoms! 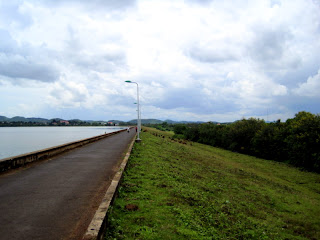 Hours passed and we were chugging deeper and deeper into the Central Highlands. Lulu dropped me off at the end of a two-kilometer-long bridge between farmland and natural lake, and I strolled along to the sound of cowbells and a farmer shouting, “Hello!” 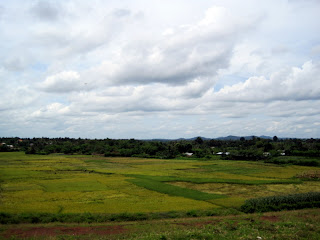 This was a far cry from a tourist playground! And that is why I had signed up for it.

Oh silly Ms. Marshall don't you know that if your mouth is burning water isn't helpful?

Luddy Sr. said... Be prepared for lots of questions about this motorcycle trip! I can't get enough.