Article #1 in the ESL Student Life Stories Project, by Cho from Korea, age 30. 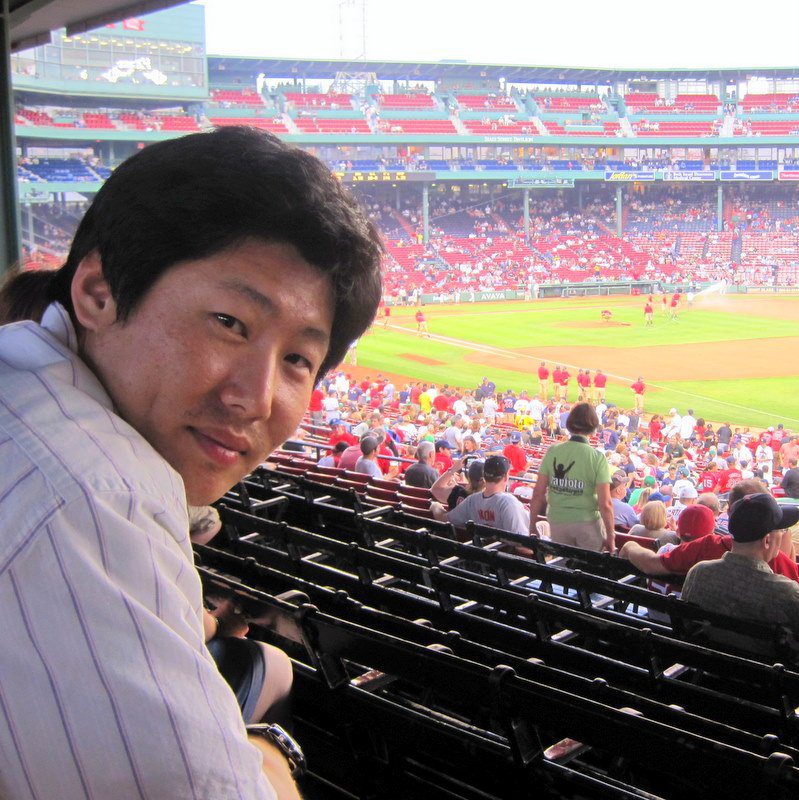 Cho at Fenway Park in Boston!

I seemed to fly to the sky and the moment was the best day in my life! All around me were fans in red tee-shirts, and the green field was so beautiful. I was actually in Fenway Park watching the Boston Red Sox play the New York Yankees!

But shockingly, this magic moment was cut short when bad luck struck.

I am from Korea and I’m 30 years old. I am a language school student in Boston, preparing to get a Ph.D in Physical Education.

I love watching baseball, and I also play it sometimes. So for many, many years, my dream has been to see a Major League game in America. I especially longed to see the Boston Red Sox play The New York Yankees at Fenway Park, the most historical baseball stadium in the United States!

In Korea, baseball is the number one most popular sport, but except for the Korean Championships, people can get tickets to games easily. I knew that the Major League in America is different, however. Getting tickets here is very difficult, and it is especially difficult to see Boston versus The Yankees. 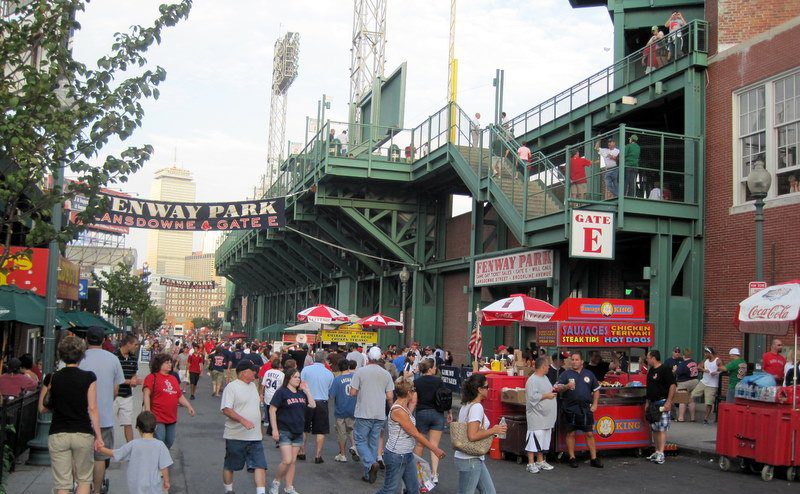 The excited crowds outside Fenway Park

One day, however, one of my housemates in Boston said to me, “Guess what? I got eight tickets to see The Sox play The Yankees from the Auction Website!”

When I heard that, I gasped to myself: “I am getting my dream!”

The date came very fast. My friend and I arrived at Fenway Park three hours early to sell our six extra tickets. And it was here that the first piece of bad luck struck.

I thought that it would be very easy to sell the tickets because this was the most famous baseball game in the U.S. However, it was not easy at all. There were a lot of other people who wanted to sell their tickets, too! 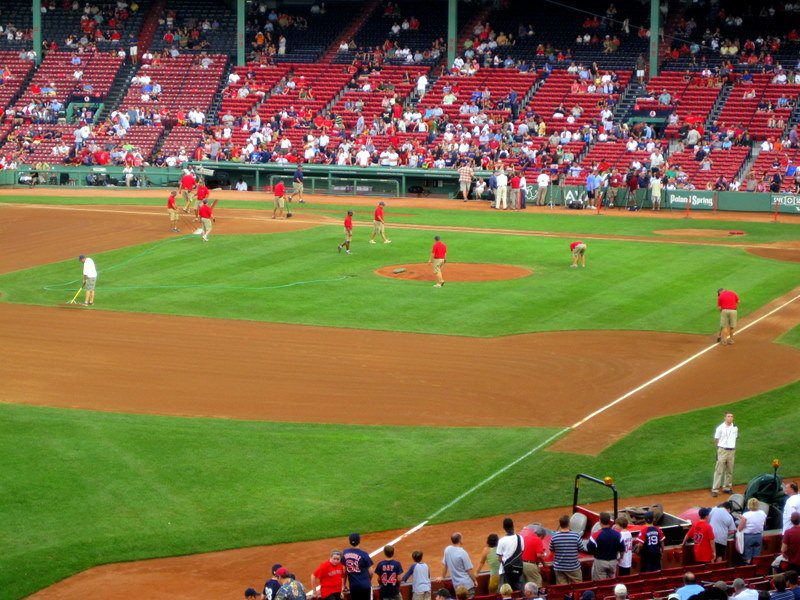 The Red Sox prepare to play!

Getting desperate to find customers, I began shouting loudly, “I have tickets! I have the cheapest tickets!”

Tragically, the people who passed me had no response. After hours of hard and depressing effort, we sold the tickets at half the price we paid.

We told ourselves that it was okay because we were going to see Boston against New York, and we began walking inside. Now, this day was very cold, so I wore a jacket. But despite the painfully chilly air, almost all the other people in Fenway Park wore only short sleeves. It seemed like they were so excited about the game that they were actually hot!

We walked to our bleacher seats. From this bench, I could see famous baseball players such as Joshua Beckett, who is a Boston Red Sox pitcher! The crowd around me began to chant, “LET’S GO RED SOX!” and sing, “Sweeeeeet Caroliiiine, bum, bum, BUM!” 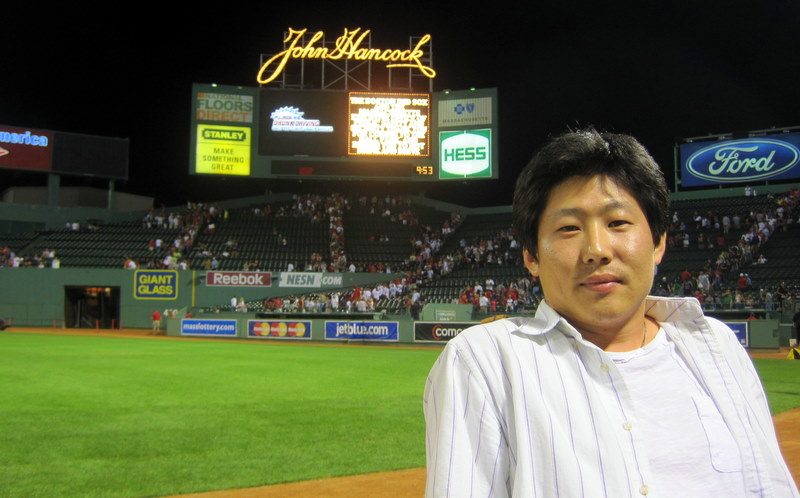 These sounds asked me, “Are you happy? Have you at last achieved your dream?”

I answered to these sounds, “Yes, I am, and I have.” But at this moment the second piece of bad luck struck.

A strong, cold wind began to blow. Trying to avoid the chill, I drank sweet and hot coffee, clinging close to its steam. I started shivering anyway. I tried to bear the cold. I tried and tried to bear it… but it was so hard! I could not be patient with the frigid air. At last I stood up and cried out, “I must go home!”

After just one inning, I walked down the aisle to the exit. I’ve never gone home while seeing a baseball game in Korea. As I walked, I thought all the fans, players, and Fenway Park itself were glaring at me. My dream was finished after just ten minutes.

I do not know whether I can have another chance to see a Fenway game or not. But now I know: I must have patience to achieve my dream!

Lillie’s Note: Did you see that twist ending coming? Cho brought our entire class into hysterical laughter when he presented this story aloud. PLEASE leave him an encouraging (or gently indignant) comment, stating your geographical location. Cho put a lot of time into this article and our whole class eagerly awaits your replies! 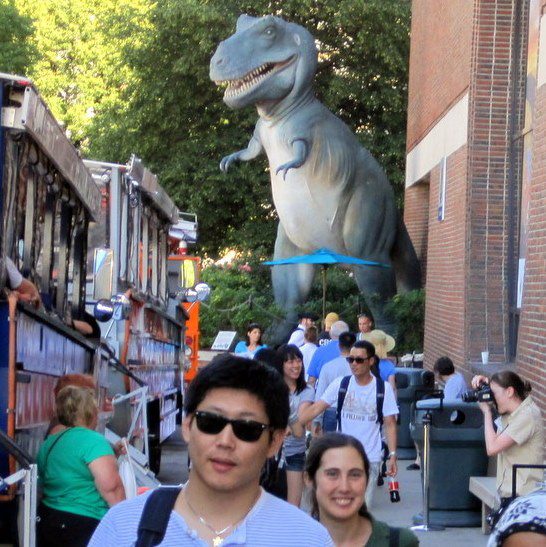 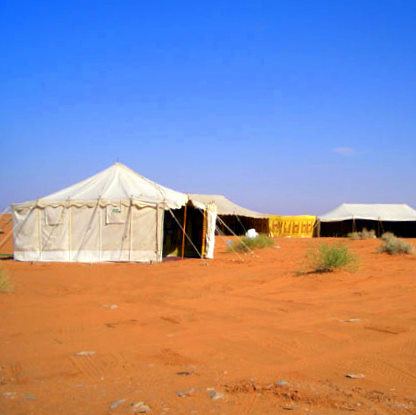 Hi Joon! Even now I can feel your excitement at that day. So sorry about the ending of your first Fenway experience, but because of it we could expect the next time. I really want to go baseball game with you anytime soon. Let me know when you want to go.

By looking at your picture at Fenway it looks like you got some good seats. Getting a good seat at Fenway Park is very hard and I know that first hand. It is even harder to get good seats in a game between the rival Yankees. It has to have been very expensive and having to leave after the 1st inning is sad. That is a tragic end to a dream come true. I was at Fenway Park during the pass week and I take it for granted to go to Fenway Park not thinking about all the other around the world who wants to go to Fenway Park. This just gives me more reasons to be proud of living in Boston.

This is a really funny article actuallly. I still am wondering what he did with the money for selling the tickets. If I were him I would've bought some food and a red sox sweater! That way, I'd be warm and achieve my dreams of watching the Red Sox vs. The Yankee's. Lesson definetly learned here, always bring a sweater or a coat to a baseball game:D.

Fenway Park is an awesome place to be. I went to a game when they versed the Angels. They were $90 tickets and really close seats! Fenway Park is a great place to be during games. Remember to bring your jacket just in case next time!

It sucks that going to see this baseball game was your dream and nature cut it short. :,( Don't feel embarrassed I probably wouldn't have been able to tough it out either.