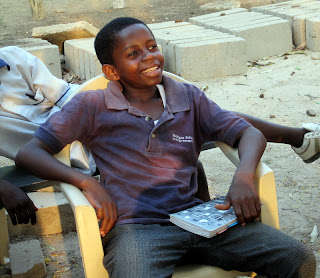 My name is Mawuko Courage and I have four brothers and six sisters. I live in Kpotame in the North Tongu district in the Volta Region of Ghana. My mother is a trader and my father is a pastor.

I was fourteen years old when my friend Olukpedu was burned by a brush fire.

Brush fires have become a great predicament in our community. The term “brush fire” refers to the burning of trees, grass, and shrubs. Often these fires begin when people burn their rubbish to dispose of it, or when they want to drive away animals or clear land for farming.

As the wise saying goes: Fire serves as a good servant, but a bad master. Fire may be useful, but it can also quickly destroy life and property. 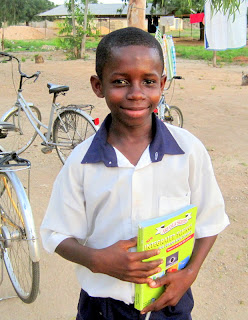 Olukpedu was a friend of mine who was living in Kpotame to further his education. He was originally from Nigeria. One day in the year 2009, Olukpedu went into the forest to pick some firewood for cooking.

Suddenly, my friend came across a naked fire burning ahead of him. He drew nearer to the fire to see the reason why it was set. He then came back to where he was searching for wood. He did not realize that he had dropped his cutlass back near where the fire was burning.

As Olukpedu was returning, the fire was burning highly at his back in the absence of him knowing. My friend thought that the fire would quench before he arrived at his normal place, but yet the fire did not quench.

He had begun to tie the wood he had collected with a rope when the fire reached him. Olukpedu wanted to run away, but before he could run, the fire caught his back.

My friend began shouting and calling to people: “Hey! Hey! Help me!” over and over again. I heard him and thought he was joking. But before we could get to him, Olukpedu had been burnt. 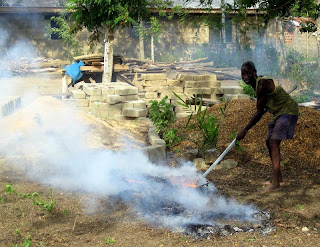 My friend was still alive, so quickly he was sent to the hospital. Before they reached the doctors, however, Olukpedu had died. His life was ended and I was left alone. I felt so lonely for days and cried for a month, but my friend couldn’t be woken up. I just kept saying to myself: “God gives and God takes.”

Now, however, our Cross-Culture Class at YCC has taught us that it is NOT enough to simply say, “God gives and God takes” and leave it at that. Instead, we must learn to be local leaders and educate the public to develop our communities for the better. By educating our communities, we can prevent tragedies like what happened to my friend Olukpedu.

Lillie’s Note: Please do leave a comment for Courage, making sure to state your geographical location!

Wow this is so sad. But very powerful article.

It's extremely sad that your friend had to die for you to able to teach this lesson. But I'm glad you wrote this article about something so powerful.

The forest fires we have had in the western United States can be every bit as dangerous as the brush fires. When a person (or a home) is caught and surrounded by these flames, the results can be deadly.

This story provides an important lesson about using caution around a wildfire. This can also be a lesson in safely handling a fire. Hopefully, many people read your story and learn from it in order to prevent future tragedies.

What an incredibly sad story to read. I'm so sorry that you lost your friend Olukpedu. Although your story is a difficult one it is an important one as well. Perhaps one of your classmates will be saved from being burned as a result of hearing your story. It is good that you figured out a way to turn a horrible tragedy into something positive. I'm sure Olukpedu would be proud of you for educating others on the dangers of brush fires.

These types of fires seem to be very common in Ghana. I saw many burned patches on my trip there myself. I wonder if you and your classmates can think of an alternate method of getting rid of garbage or clearing land. Is there a safer way that you can think of?

Thanks for sharing your story.

Lorraine said... I am so sad to hear that you lost Olukpedu, your close friend. You are doing a great service to your community by educating the public about the dangers of brush fires. Thank you for sharing a heart-touching story. --Lorraine, California, USA