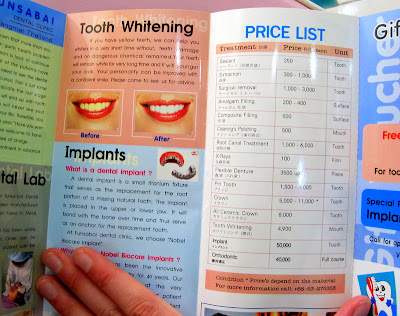 Several weeks ago, my friend Paul was informed by his Manhattan dentist that he needs three root canals, seven crowns, and “various other stuff”. Total projected cost: over TEN THOUSAND DOLLARS.

Although Paul is a semi-famous politician, like most of us he does not have ten thousand dollars to fling towards one square inch of artificial tooth polymers. Thus, our brave hero got to thinking… how would someone endorsed by the New York Times get out of this pickle?

And then it hit him: Dental Tourism.

People travel for for oh so many reasons: from cultural exploration, to soul searching, to career expansion, to sex tourism. Many of these reasons are enhanced by favorable exchange rates. In the case of sex tourism, a middle class, ogre-ishly ugly man from Munich can become a wildly rich man whose looks can be overlooked once in Phnom Penh.

But we are not talking of prostitution now– we are talking of dentistry.

Paul began to dig around online, and found hundreds upon hundreds of well-reviewed Thai dentists who could do his tooth work for a fraction of the price quoted at home.

Meanwhile, on this side of the world, I began asking around and realized that about half of the expats living in my neighborhood of Chiang Mai are here to see Thai dentists!

Many of these dental tourists have been here for months, getting procedure after procedure completed. All of them seem very content with the services they have received, and all of their smiles look straight and bright. Most of these folks also take advantage of classes, hikes, sightseeing, or beach fun while here in Thailand. Might as well get the most out of that expensive flight, right?

Taking a cue from all these smiley champs, today I went in to one of the many dentists on the tourist strip. For fifteen dollars, I got an enjoyable and effective cleaning, along with some very kind compliments about my oral hygiene. 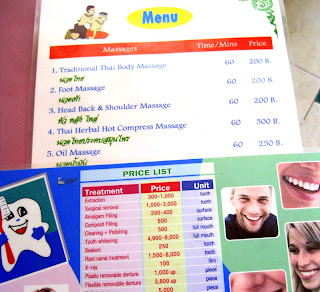 I also snapped some dental price list photos for your perusal (pictured to the right, layered over a massage menu, as apparently every type of business in Thailand has a massage parlor attached!).

“Wanna know the difference between Thai Massages and root canals?” asked Paul as he came online to book his flight to Bangkok. 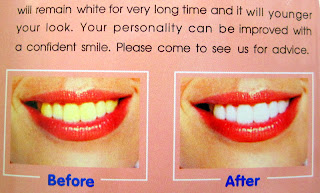 I imagine Paul was giggling heartily as he entered: “Unlike Thai massages, ALL root canals have happy endings… ’cause you’re really happy when they end!”

But corny jokes aside, an economical, professional dental bargain is a happy thing indeed. Hooray for Dental Tourism!

Previous Post: « Ways to Make Buddies While Traveling
Next Post: Thai Massage School Graduation! What Does it Mean? »