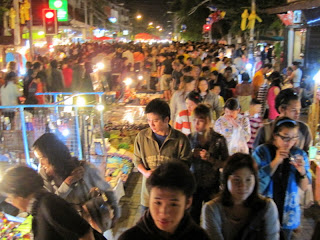 Ben was only two days into his new life in Chiang Mai, and he was already eating bugs.

I met Ben and Mike in a restaurant the day after they’d left everything they’d known in Australia to move their internet marketing enterprise to Thailand.

They were joining their friend, Paul, who had come to Chaing Mai fourteen months ago and spread the word that the curry here is cheap, and the living good. 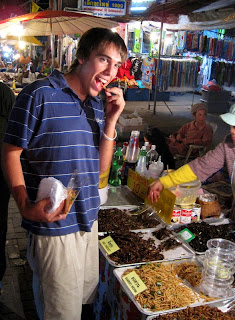 “Was Paul surprised when you actually appeared here?” I asked the guys as we neared Chiang Mai’s massive Sunday market (pictured, above). “So many people talk of starting again in a far-off country, but folks rarely follow through!”

“Naw,” said Ben as we plunged into the giant ocean of humanity spilling out of the market’s first block. “We’ve been planning this for a while. Paul started to realize we were serious.” 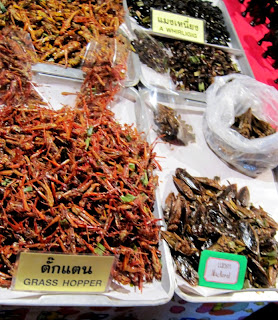 Serious, indeed. By the time Ben held the bag of deep-fried worms in his hands, he had already learned four Thai phrases. He even negotiated the worm price in Thai!

The stoic older woman scooping the bugs into sacks showed a flicker of respect for Ben on her lined face, then descended back into her insect-bagging trance.

Though wimps can’t be choosers, I was a little disappointed that Ben hadn’t bought the crispy Grasshopper, or the glisteningly black “Whirligig” beetles. Who knew Whirligigs even existed?? But they do… and they give me the heebie jeebies. 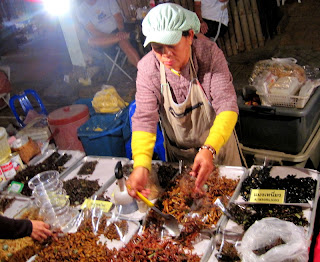 That said, seeing a fellow human eat worms kind of gives one the heebie jeebies, too. And it must be equally jeebie-ish to actually BE that worm-eating person, given that Ben discreetly trashed the half-full worm sack after gallantly eating several handfulls.

Are you not into bugs? No worries: there are literally thousands of other amazing things to eat all along the miles Chiang Mai’s Sunday market. 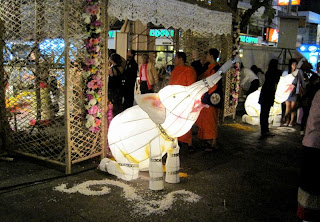 Together, the group of us ate and shared: mango sticky rice (dessert first takes the edge off!), chicken kebab, quail eggs, veggie and noodle rolls, green gluten something cut in squares with soy sauce (mmm!), dripping honey doughnuts, deep fried bananas in deep fried spring rolls with condensed milk and honey on top, sugared tamarind, papaya, and probably a bunch of other things that I’m forgetting in the residual sugar and oil coma.

There was also plenty of terrifying-looking “Black Vegetable Jelly” to purchase (pictured, right), but we politely kept walking. 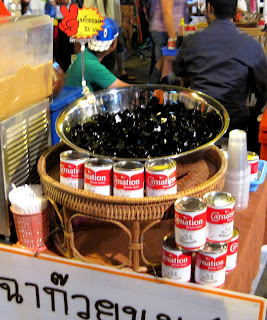 Each food item at the market costs about 10 Baht (30 cents), meaning you can feast all night on one item per minute, and still have a fat purse left over. 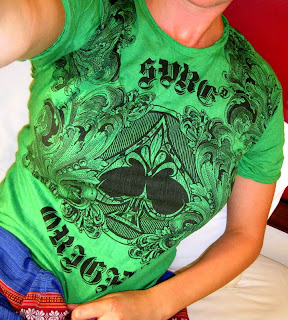 I have been rather wary of shopping in Thailand after the Chiang Mai Night Bazaar Disaster of November, 2009 (in which I bought three Thai-sized dresses that turned out to not (ahem) adequately cover my frontal region). But at eight pm when the Australians headed home, I grew rabid with shopping fervor and plunged back into the consumer froth.

By eleven thirty at night, when I headed home along with the six people from massage school I’d run into (crazy, given the tens of thousands of people in the market!), I had purchased: 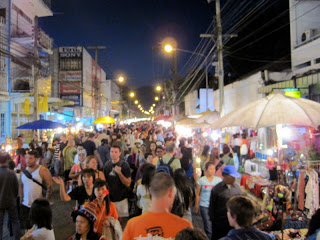 2) A brown vee-neck tee to replace the one that rotted and forced me to hack off its sleeves.

3) Those wildly backpacker-trendy Fisherman Pants (pictured above, though you can’t really see much!) which are baggy sacks with embroidered belts that you wrap around to fit your size.

I am a mess at tying them right, but they were perfect for massage class today! And now I feel in fashion with my compadres. 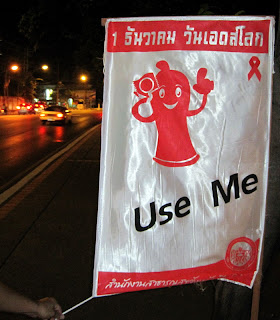 So. Thus concludes the exhilarating tale of the Chiang Mai night market… for this week.

As an epilogue, you will be happy to know that on the walk home we passed about thirty AIDS-awareness banners (pictured, left) with lively, anthropomorphized condoms pleading: “Use me!”

i would prolly try some bugs, but NEVER those giant fried spiders they have in Cambodia! EVER!!

I think it is interesting how in some countries they SELL bugs to EAT and in others many people would scream if they SAW a bug!

I really like this article, because i really wanted to try eating bugs but never have the chance to. By the way the â€œblack vegetable jellyâ€ itâ€™s not as bad as you think itâ€™s the same as the green jelly. They just look different thatâ€™s all, I think =]

Your post makes me homesick for CM. I've spent quite a bit of time there over the last few years. I love the Sunday market and all the great food. No bugs for me though!

I'll be there full time in about 10 months....not wishing my life away, but can't wait!

Loved Chiang Mai and the Night Market, but didn't get any good pictures when I was there. Damn it. Just didn't have the energy for some reason.... and didn't eat bugs there either ;)