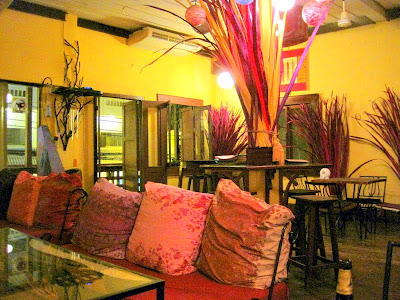 (Disclaimer: To demonstrate the heavenly Vientiane food scene in this article, I am forced to reveal my gluttonous, anti-social, cheapskate side. I promise, I do at times actually interact with the non-edible facets of life, but yesterday was not such a day.)

“Where else but Vientiane could you enjoy steak au poivre for less than US$5?” asks my Lonely Planet guide, barely holding back its drool.

Laos is an epicure’s dream. It’s got fresh produce, French influence, friendly locals, and a large enough ex-pat community that the cute little cafes by the riverfront have First-World-level cleanliness, amenities, and decor.

I have been in Laos’s lovely, tiny, capital city, Vientiane, for two days now, and have literally been unable to do anything but roll from restaurant to restaurant, stuffing my face like a starving beast, and using the heck out of the ubiquitous free Wi-fi.

Here, honestly, was my day yesterday: 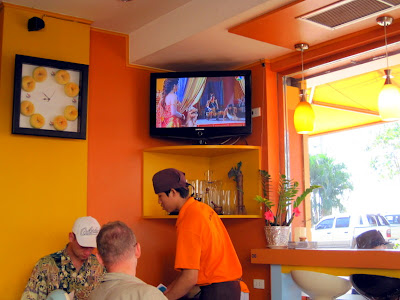 1) Arose, nicely rested, at 9am and walked along the calm and undeveloped Mekong riverside half a block from my $6 a night hotel.

2) Strolled into SaBaiDee Cafe for a $3 breakfast of fresh fruit (mango, papaya, watermelon, banana, apple, dragonfruit) with yogurt, avocado-chicken omelet, fresh french bread, sausage, and iced coffee. Used the Wi-Fi for embarrassing amounts of time to counsel a former student through a tough time in college.

3) Having amply digested, sashayed four doors down to Sticky’s Restaurant. Spent $3 on lunch of a grilled veggie wrap with a chickpea, eggplant, and cheese salad, plus a fresh passion fruit shake. Eavesdropped on the spunky Australian women gossiping about the hostel they run in Vietnam, and tried to focus (via free Wi-Fi again) on the drudgerous task my famous blogger boss has given me to help promote his website. 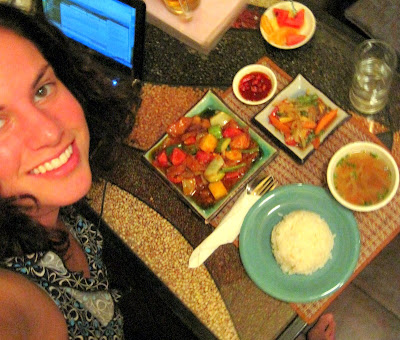 4) After way too long in that restaurant, meandered in the scrumptiously warm Laos air past the many temples scattered amid Lao Beer adds and banana vendors. Tried to read Laotian curly writing and failed. Went back to the hotel and hand-washed bras.

5) Time to eat again! Yippee! Hit Full Moon Restaurant for their daily 5-course-meal $4 specials. Ordered: Thai-style sweet and sour fish with pineapple, sauteed vegetables, savory soup, rice, and fresh fruit. Laughed at the giant German and British blonde birthday party erupting loudly in the corner, and at the French couple glowering in their direction as their romantic evening was shattered.

Stayed in the restaurant’s airy veranda for hours, taking hand-outstretched photos of myself with the food like touchy-feely couples take a parties. Felt really good about going on three dates with three different food combinations in one day. 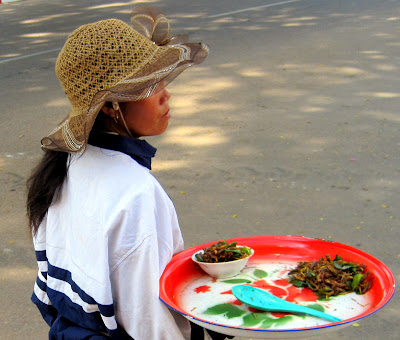 6) Got (Laotian-ly, politely) kicked out of the restaurant at 11pm, whilst chatting online with beloved Boston friends and family. Signed off, thanked the waiter, and realized how much money one saves in a country (like most of Southeast Asia) where you don’t ever have to leave a tip. Left a small tip anyway, because this restaurant made me very happy.

Walked the three blocks home through the ridiculously safe and tourist-filled streets (I feel far safer in Southeast Asia than in the bulk of America, and most people I meet feel exactly the same), then drifted off to dreamland in my cozy little bed!

Total day’s budget damage, including everything from food to lodging: less than $20. If I had been less of a brat and had eaten in the lovely, abundant Laotian eateries that locals patronize instead of stuffing myself in expat cafes, I would have halved that! But sometimes chickpea salads call.

Oh, and see the woman selling crispy fried insects in the street, pictured right? I didn’t eat those.

Actually, in seemingly many Asian countries (definitely Japan, South Korea, and Thailand), tipping is not a custom.

I only spent a day-and-a half in Vientiane about two years ago, so I definitely can't consider myself an expert on Lao cuisine. But I found plenty of vegetarian options at restaurants in Vientiane, so I couldn't complain about the food.

Nice piece, but actually you went (or at least mentioned) the most tourist and foreigner-focussed places you can find (although missed Makpet and Khop Chai Deu). The crickets would have been a truly Lao experience (and they are really good, try with beer). Kong View, Lao Kitchen, Moon The night and the Ping something restaurants are actual Lao restaurants you should try next time.

Great point! I had no illusions about "getting off the tourist trail" with my food choices here. But next time I'll take your helpful suggestions!

Everything looks so bright. Laos sounds so great. Your fruity breakfast sounds so refreshing! I don't hear about Laos much but it sounds so relaxing there.

Louisa said... I hope you try the fried insects tomorrow.

Dave said... Meals taste that much better when you go directly from one to another...