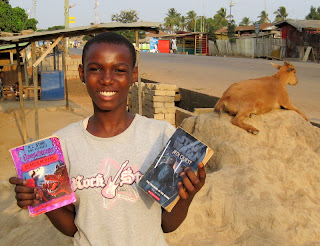 Around two o’clock in the morning, neighbors ran from door to door yelling for people to come outside.

“An earthquake is going to happen!” they screamed.

In my lifetime, Ghana has never experienced an earthquake, and so everyone panicked. People poured outside with their children and their belongings so that the buildings shouldn’t collapse upon them once the ground began to move.

I was twelve years old and my mom shouted, “Emmanuella, won’t you wake up?” She ran to rouse my younger brother and sister, Chris and Schorlarstica. Instead of moving, I just peeped out the door crack then fell back to sleep. My whole family, however, had sprinted outside. When my mother found out later that I had remained in bed, she was furious!

Because people didn’t want to die, they all came out– even the one year old babies at their mothers’ backs. My whole neighborhood was standing on the roadside from two o’clock in the morning until five o’clock am, terrified, just waiting for the giant earthquake to come. 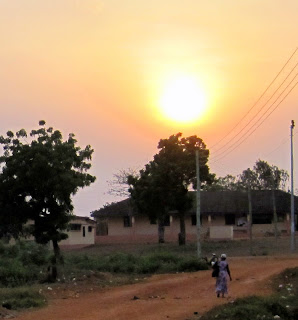 Early in the morning, they broadcasted on Radio Tongu that no earthquake would happen. Still, however, people were afraid. Some of them remained at the roadside for hours, trembling.

Me, I started to do my house chores: washing my junior brother’s school uniform and dusting the furniture. After doing everything, I took my bath as I usually do, using buckets of water and a cup. It wasn’t until I was about to leave for school that the scared people outside began to pack their belongings back into their houses, and other children started their house chores.

When I got to school, there was nobody there, so I went to the Headmaster’s house to obtain the key to the school and I opened the school doors myself. Eventually, students and teachers began to come.

During break, everybody started to talk about the earthquake that was supposed to happen but did not. A friend of mine claimed that it was actually her uncle from Bolgatnga who had called her mom on the telephone to come out of the room, thus starting the earthquake panic. Others said it was the weather forecasters who had made the mistake.

A girl in grade six called me over and said, “Do you know what they have said? They said that it was the armed robbers who planned the earthquake rumor! Those who were not in their room were robbed… and they’ve robbed us too! All of our belongings!” 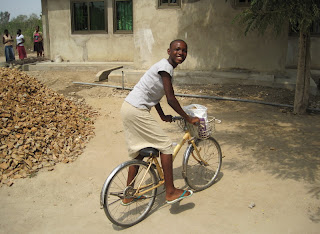 “Sarah,” my friends and I asked, “Where were you and your family before you were robbed?”

“We were among the people who were at the roadside,” Sarah replied. “By the time we get back inside, all our belongings had vanished.”

We thought it was a joke and started to laugh, but soon we saw that Sarah was about to cry.

“Sarah, sorry!” I cried out, and I asked her to come to my house and stay with me until everything became settled. I told her I would contact her parents and tell them.

“Wow!” Sarah gasped, so surprised that I would take her into my home. She ended up staying with me and my family for two weeks.

Another girl said that she had read a book about an earthquake, and in it, all the buildings collapsed, and thousands of people died. Those who were not under any buildings died, too, because the ground opened up like a mouth and swallowed them up, then closed back upon them. 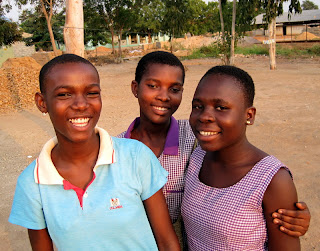 “What a sad story!” we sighed. “Tell us the name of the book so we may read it!”

Break was then over, and everybody got back to their classroom. The false earthquake rumor caused so much confusion and panic, but how glad we were that it had only been a rumor!

Unfortunately, our brothers and sisters in Haiti were not so lucky. We in Ghana send all our love to the earthquake victims of Haiti, and we wish them strength in rebuilding their country!

Lillie’s Note: Did you enjoy Emmanuella’s article? Please leave an encouraging comment, question, suggestion, or compliment, and state your location! Also, just so you know, the books that students are holding up in their author photos are their favorite novels that they’ve read in the donated YCC library– they’re not just random books!