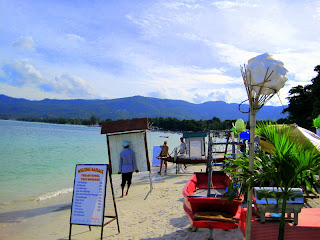 1. It’s September. Who ARE these tourists?

I’ll tell you one thing: they ain’t Americans. I’m the freak again! Woo hoo!
They are, however, a ton of Europeans (English, Irish, German, Italian, in that order, I’d estimate), Aussies, Israelis (tons!), and Canadians.

On the boat to Ko Samui, I had a lovely chat with a Colombian couple who have been travelling for ten months (!!!) to every country ever created (including motorcycling, Che-style, down South America). “Have you met many other Colombian tourists in your ten months abroad?” They looked at each other morosely and said in unison: “None.” 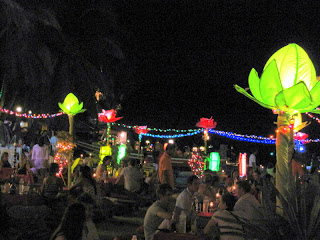 2. Canadians, you say? I have never even thought twice about that big, weird country above the U.S. What are they doing traveling?

In the words of a new Canadian buddy: “Eight months of winter, and enough cold to make your eyeballs freeze. Enough said.”
So, I am suddenly realizing not only that Canadians exist, and not only that they travel a LOT (especially to Asia), but also that they are really nice and fun and interesting! Remember that the friends I was visiting in Japan were Canadian, as were half of the Muay Thai boxers I met in Phuket. Reconsider your complete disdain and disinterest towards our Northern neighbor! 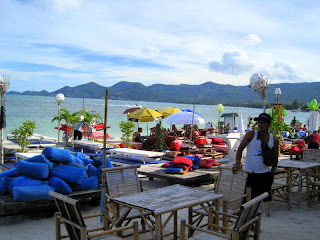 I have travelled a lot, and I can tell you one thing for sure: Israelis LOVE to travel (they are EVERYWEHRE in Latin America, and they make up over half the tourists here in Ko Phan gan), and they LOVE to party. They’re fun and really nice!

In Israel, all men and women 18 and up must join the army for three years. You can clearly see how tough this makes a person (our Canadian friend got tazed on the beach and fell and hit his head; our Israeli friend, when tazed, didn’t flinch), how fearless (they often do the most daredevil travel things, ex: the giant gash on the arm of one friend from skidding a moped down a rainy Thai hill), and how close-knit (they always travel in couples or large flocks of loving buddies). 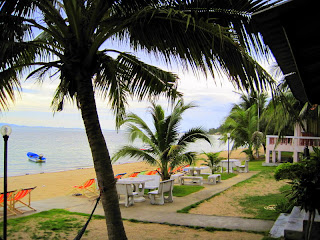 One of the most fascinating elements of Israeli travel is that, even in the most remote areas, the majority of still adhere to religious food laws, such as keeping kosher. This meant, for example, that our Israeli friends could not eat with us at the beach restaurant because the restaurant serves shellfish, and since the silverware was not disposable plastic, the Israelis would not eat off forks that had touched the bottom feeders. Similarly, another restaurant advertised in Hebrew to lure in Israelis, but none went because there was not an official rabinnical sign on the wall proving the food was prepared according to Kosher laws.

And yet… at times these religious laws are flexible. Case in point: I asked my Israeli bud, “Um– you said you are going to the giant Full Moon festival on Ko Phan gan… but doesn’t that fall on a Friday: the holy time of Shabbus?” My friend, a two-gun wielding policeman from Tel Aviv, averted his eyes and bit into his kosher hamburger. “Er,” he mumbled, “I’m on vacation?”

4. So where DO religious Israelis eat?

In every nook and cranny of Earth, there is a Chabad: a mini Israel. The Chabad in Ko Samui, at which my Israeli chums took me to eat was a spacious building with a large dining hall (and decent, reasonably-priced Kosher food), along with a reading room and library, a prayer room, free internet and coffee, and about seventy Israelis/Jews of widely varying skin tones.

I am hoping to visit Israel around December (“And marry an Israeli man???” asks my Grandmother, eagerly), so I am fascinated by the tidbits of Israeli culture I can glean through its many travellers.

5. What are weird ways some Thai folks try to make money on touristy Chaweng Beach? 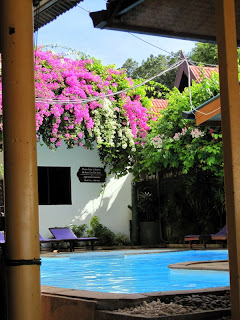 – A pack of seven nearly-infant kids (actually from Burma, not Thailand) scamper around and try to get you to play a portable game of CONNECT FOUR for 100 Bhat ($3) a game. They are maniacally good and ALWAYS win, spurring macho tourists to challenge them again and again in ridiculous (costly) fashion. This is one of the most harebrained, successful extortion schemes I have witnessed!

– Men carry around giant, cute/terrifying animals, then drop them onto you and try to force you to pay for a picture with the flea-encrusted beast. Animals we witnessed: baby monkey (CUTE! SMELLY!), falcon (SCARY), snake (ran away before I could make a judgement).

– A man or woman will come up to you and hand you a blanket and say, “Want to buy?” Under the blanket is a pack of cocaine/marijuana. Reminder: Thai drug laws are strict as heck and Thai jails are a nightmare. Throw that blanket back!

5. Can you trust anyone? 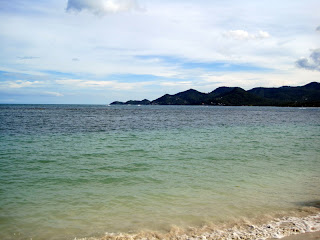 The night I met Sylvie, we suddenly heard, “$&(#@*!!!!!!!!!!!!!!!” being screamed repeatedly from the table next to us. Turns out that the Australian group next to us had just been stuck with the 1,700 Bhat bill from two very nice Irish girls who’d sat with them them a few hours ago, eating, drinking, chatting… and ultimately sneaking away without paying.

Always good to be on your guard (within reason), yeah? 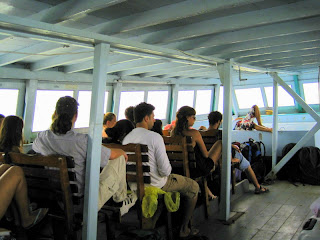 Correct. I shall keep you posted. (And, yes, I’ll be careful :) I’m staying on the quiet, far beach, and you know I’m an utter failure at staying up late.)

I was in Thailand not three months ago and there were a ton of Europeans then - weirdly, most of them Russian. Haha, I love to keep an eye out for all the different nationalities of fellow travellers!

A Cook Not Mad

Wow, had no idea you felt that way about Canadians :)

Luddy Sr. said... Oh my!!! Those little punks could never defeat me at connect 4! I will take every penny they ever earned! They better pray I never make it to Chaweng Beach.

anna said... huh. surprised to read this about the israeli folks you met. i've been to israel, as well as knowing lots of israelis in the us, and no one i've met is observant or kosher-keeping! tough, though - yes.