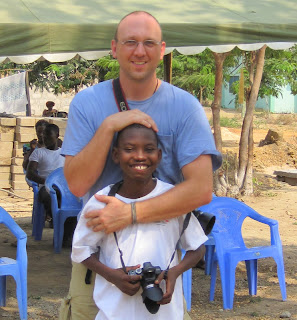 It is currently five in the morning: the time that most punctuality-abiding Boston Public Schools teachers and students arise each morning to make it to school on time.

Here in this mosquito-infested hotel in Accra, what on Earth awakes us at this shocking time? Alas, it is time to escort our dear efo (brother) to the airport!

Dan (born on a Tuesday, and thus called “Kwabla”, in Ewe) is the son of Connecticut’s famed “Backpacking Granny” or “Mighty Marla.”

For years, Dan heard his mother rave about her love for Ghana, Sogakope, and Youth Creating Change. Dan witnessed the sweat his mother poured into Ghana fundraising through her nonprofit, Bright Star Vision, even when she didn’t always have enough money herself, and he saw the photos and mementos Marla brought back from her five trips across the Atlantic to work with Youth Creating Change.

“But all the time I was in Connecticut listening to these Ghana stories,” Dan admitted last night, “my mother’s pictures were just random pictures to me, and the YCC names were just faceless names that I kept mixing up.” 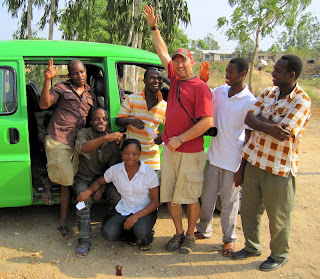 Dan lowered the volume of the Ghana-Cote D’Ivoire soccer match and turned towards me and John. “But that’s completely changed since I arrived here in Ghana,” Dan said sincerely. “I love it here, and now I see why my mother loves it so much, too.”

We nodded. Our brother!

“We already miss you so much, Kwabla! The guesthouse is lonely and sad without you!”

“You taught us Monopoly and Connect Four, and it is not as fun playing without you, Kwabla! Go directly to jail.”

“I am so thankful to have met you, Kwabla. You are the epitome of kindness and wisdom.” 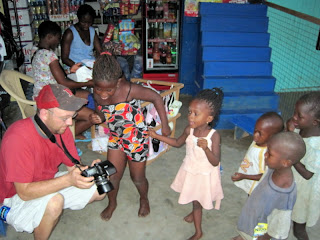 “Kwabla! You may have White skin, but you have proven yourself to be a true African brother.”

“YOU ARE NOT LEAVING, KWABLA. Lillie, lock him in the room!”

Dan is one of those truly GOOD people in the world. He listens well, he cares deeply, he’s a rollicking good time, and he is a true “man of the people.”

“So many times,” said YCC’s Director, John, at Dan’s goodbye meeting, “I would turn around and think, ‘Oh no, where is Kwabla?’ But then I would always ultimately know where to find you: way down the road in a giant crowd of smiling children! You have a wonderful way of connecting with people on the street that others don’t care to talk to, and I think YCC has a lot to learn from that.” 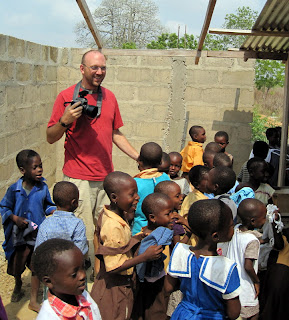 What Dan was truly masterful at was turning photography into a friend-making mechanism– while also snagging amazing photos. As we walked anywhere, he would politely ask people: “Photo?” If they said yes, he would snap a few, then immediately show the person the gorgeous result.

Here’s why that was so important: the majority of people in Sogakope, Dalive, Aburi, and other towns here in Ghana have almost never seen a photograph of themselves. Some did not even recognize their own faces! When they did, however, or when mothers suddenly saw their precious baby in glowing digitization, they would let out a gasp and then a wild whoop of happiness. Wonderful!

Four thousand photos later, most people in Sogakope know the tall yavoo, Kwabla, and run to him with unbridled happiness.

This statement was said with such sincerity that it took my breath away. 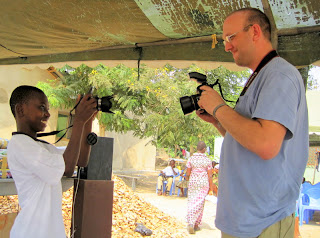 Just then, Dan’s phone rang and YCC’s own Oliver appeared at the other end to wail, “We miss you, Kwabla!!!”

Dan was immediately “one of the boys” at YCC, no doubt about it. He was also beloved friends with young Alfred, pictured in many of these photos, who is the grandson of John’s Auntie, and also the most wonderful child imaginable.

As Dan was leaving, Alfred asked eagerly: “Do you want me to iron your pants for you?” This amazing child’s gap-toothed grin glows, and he knows how to have fun while still constantly helping around the house.

He and Dan were like brothers… so much so that when we stopped by Alfred’s house on the way to the airport, Dan and Alfred had both coincidentally put on the same outfit! Talk about mind meld… look at the resulting accidental twin photo to the lower right! 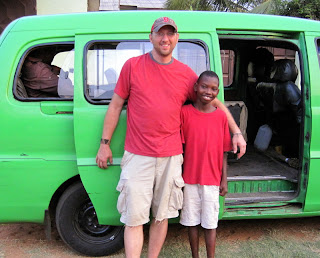 And here is one more excellent thing about Kwabla for me, personally: months before we met up for the first time in Ghana, Dan had begun to voraciously read and comment on this very Around the World blog! He is the kind of reader that delights a writer: insightful, responsive, appreciative, and alive with interest.

The other day in steamy Accra, Dan started chuckling and exclaimed: “It is going to be totally bizarre when I get home and start reading your blog again. It’s going to be like I was reading a good book, and then suddenly turned the page and realized that I had been transported inside it!”

Dan added: “And plus, now that I personally know the author, I realized that she’s a lot weirder than I thought.” (Okay– so I made that last sentence up, but odds are good that it’s true. Hehe.) 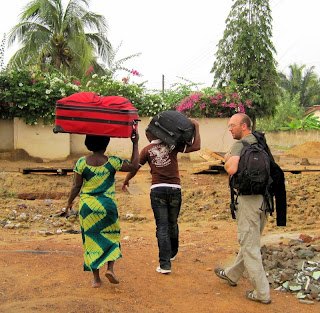 As much as this English teacher loves book-style literature, the extra fun perk of getting some of your reading fix from blogs is that the authors are so very accessible!

Time fast-forward. It is now one in the afternoon, and I am finishing this after we dropped Kwabla off at the airport, sniffling and sighing.

It was a dramatic, time-crunched, police-stopped experience, let me tell you, and one which illustrates some of the infrastructure gaps in dear Ghana.

John was supposed to meet us in a taxi to head to the airport at six am to catch Dan’s ten am flight. During the night there was a torrential downpour. The long, rutted dirt road from John’s Auntie’s house became a sea of mud with craters of brown water.

In the early dawn, John’s taxi got stuck on that sloppy road, and though everyone pushed it, there was no use. John leaped out and ran around like mad to find another taxi, and finally had success… but by then he was too far from his Auntie’s house, and thus had to leave Dan’s giant suitcase there to go meet us. 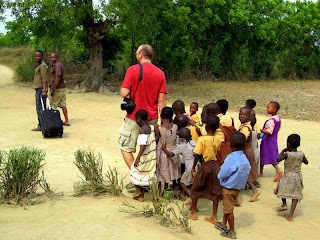 At seven am we saw John screech up in the new taxi and we hurled ourselves inside. Poor John was sniffling from a bad cold that had developed during the previous night’s rain, but he insisted he was fine.

We headed back down the mud road and were able to make it two blocks from the Auntie’s house, but couldn’t come closer for danger of getting stuck in the mud again.

We ran inside, saw Alfred and hugged him, and Dan rapidly pulled on his long pants and fleece (re-entry to cold weather!) and re-packed his bags of all the Ghanaian crafts to sell at Backpacking Granny’s February 20th fundraiser in Connecticut.

Oliver’s mother (the YCC family is a complicated and loving web) grabbed Dan’s massive red bag and threw it up on top of her head to walk across the mud to the taxi at the far end of the street! See the photo to the upper left. Dan tried to be chivalrous and protest but the skilled woman had already made it halfway to the taxi! This Ghanaian head-balancing power is astounding.

We started driving and then Alfred ran after us with a part of Dan’s camera that had fallen off. Dan thanked him profusely then we set off into Accra’s exhaust-filled traffic jams in earnest. 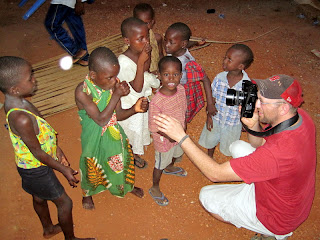 We got to the Airport at eight am and were promptly pulled aside by customs officials who interrogated Dan about the two hundred wood carvings in his suitcase. Miraculously, John talked our way through.

We were then stopped by the Delta Airlines officials of Ghana who said Dan’s bags were twenty kilograms too heavy, and he needed to pay one hundred dollars more or buy another bag and re-pack.

For half an hour we sprinted around, attempting to sort out the situation. Finally we tried sweet-talking the agent again and this time it worked! The man shook our hands and let Dan through with his original bags. Harumph… flexible rules can be both frustrating and useful.

And then (sniffle, sniffle!) it was time to hug our efo Kwabla one last time before his flight and make him promise to be in touch. I know we will be! I’m awfully good at harassing lovely people for all eternity.

Now understand this: thirty-seven year old Dan had hardly been out of the U.S. at all before his three-week stint in Ghana. Knowing this, his experience here just goes to show you two reasons why travel is vital: 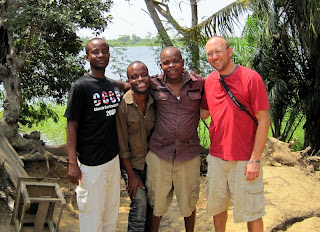 1) Dan gained friends, perspective, relaxation, four thousand photos, the feeling of contributing to a worthy cause, memories, lessons, and a boatload of fun. Plus…

2) WE were all made so much happier by meeting efo Kwabla! Such happiness would never have been created if Dan had not taken the risk to travel all the way across the Atlantic to Sogakope.

May this be a lesson to those hesitant to voyage far: when you travel, you give the world the gift of your friendship!