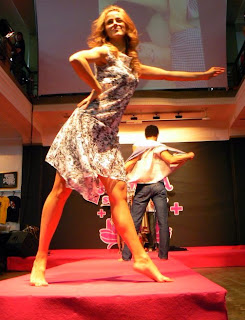 “One thing I adore about living in Spain,” said American teacher Erin who has been living here for two years, “is that the quality of life is incredibly high for an incredibly large swath of the population. Good cheese… long lunch breaks… theater… live music… Nearly everyone, from construction workers to company presidents, can enjoy these pleasures in Spain!”

At the time, it was a challenge to concentrate on Erin’s words because I was so full of fancy cheese and cured meats.

One week since I arrived in Spain, however, I am seeing on a daily basis how true her words are.

Case in point: Within 48 hours of arriving in Madrid, my friend Aaron and I were front row at a fashion show.

“I’ve never been to a fashion show before,” I whispered to Aaron, trembling with anticipation. “I feel kind of fancy!” 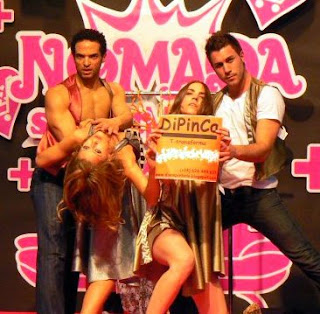 “That’s the amazing thing about living in Spain,” said Aaron, whose girlfriend Erin’s roommate, Diana Pintado of DiPinCa Designs, was one of the clothing designers being featured on the runway, “I know so many artists and actors and designers here! Back home in the U.S. I hardly knew any.”

Back up for a moment. How did I come to freeload off this Aaron fellow all the way in Madrid? Easy.

Last March, 2009, my dear former college roommate Meg took me as her guest to an unbelievable three-day Indian-Mexican-Military-Catholic-Jewish wedding in Texas. Aaron was also at the wedding, and though we had attended the same college, we had never met until then. 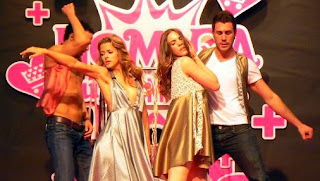 “You live in Spain?!” I gasped in delight when he revealed that he and his girlfriend had been working there for the past year. “I’m planning on going there soon!”

“Great!” said Aaron. “We’ll definitely all hang out when you come. What’s your arrival date?”

“Um…” Aaron mushed his ice cream cake, “That’s over a year away. Are you sure?” 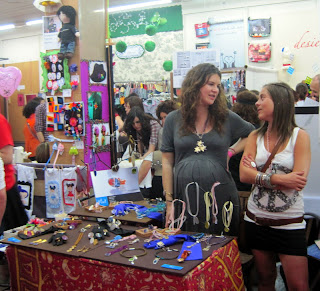 “Yep!” I said, “Something like that. See you then!” And, miracle of miracles, this plan actually worked.

Back to the fashion show.

As gorgeous women in gorgeous clothes strutted down the neon pink runway, and designers in hip outfits displayed their glittering accessories in every corner of the room (I particularly like the pregnant one pictured to the upper right), Aaron explained why I had never seen something like this at home.

“In the U.S.” said Aaron, “all these people would have second or third jobs as waitresses or something. They would be struggling a lot more. But here in Spain, it seems that they can actually make a living in artistic jobs like this.” I gazed around in awe. 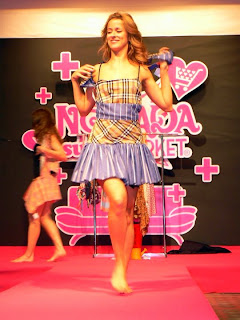 “It certainly still takes a ton of work,” my friend continued, and I nodded, remembering the sewing frenzy we interrupted when popping by Erin’s apartment, “but they can actually find success.”

Sure enough, this week so far in Spain has been filled with art, fashion (to look at, not to buy!), and… FOOOD! Specifically (as Erin pointed out) fancy cheese and classy cured meats for all budgets.

Oh Aaron: thank you for introducing me to the 6 to 8-Euro discount three-course lunch feasts all around Madrid! My stomach has been simultaneously over-the-moon delighted, and utterly in shock after three months of fufu and banku in Ghana. Quite the transition, let me tell you. 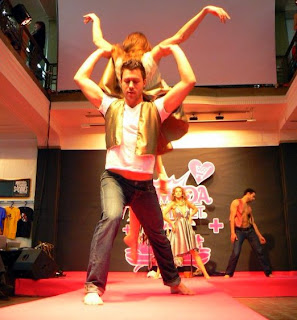 Ultimately, this was a huge reason why I flew out of Boston eight months ago, wasn’t it? To see that there are other ways to rock out this whole “life” business, and in fact, this whole “business” business. And let me tell you, this is a comforting thought as I begin pondering career choices for the coming year. Namely: stability and the known world… versus a nebulous dream with no location nor name yet!

To close, let us all now appreciate the joy of seeing pretty people in pretty clothes. Preeety!