How I Offended an Entire Class Through Cultural Ignorance 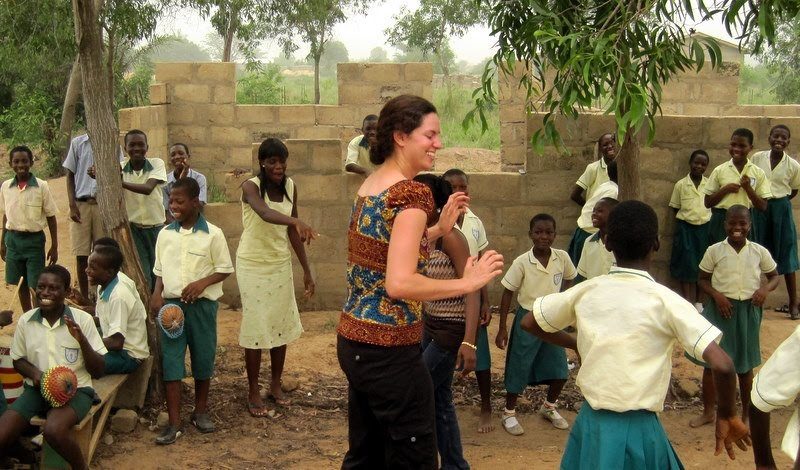 Dancing with students and teachers in Sogakope, Ghana.

“We would like to present you with a gift,” said Madam Yvonne breathlessly over the phone, “to say thank you for teaching in our school in Sogakope, Ghana these past three months! Please stop by anytime today.”

“Sounds great!” I said. So after our banku with palmnut soup lunch, and after hacking open coconuts with a machete to drink the water and scoop out the meat for dessert, Oliver (my Ghanaian co-teacher), and I hopped on our creaky bikes to the far-off school.

We arrived! The students were in the middle of Culture class, and so they were all dancing outside to live drumming. How could we NOT join in? I danced like a dancing fool. The students will likely be laughing for years to come about the gawky yevu who dances like a chicken (pictured above). 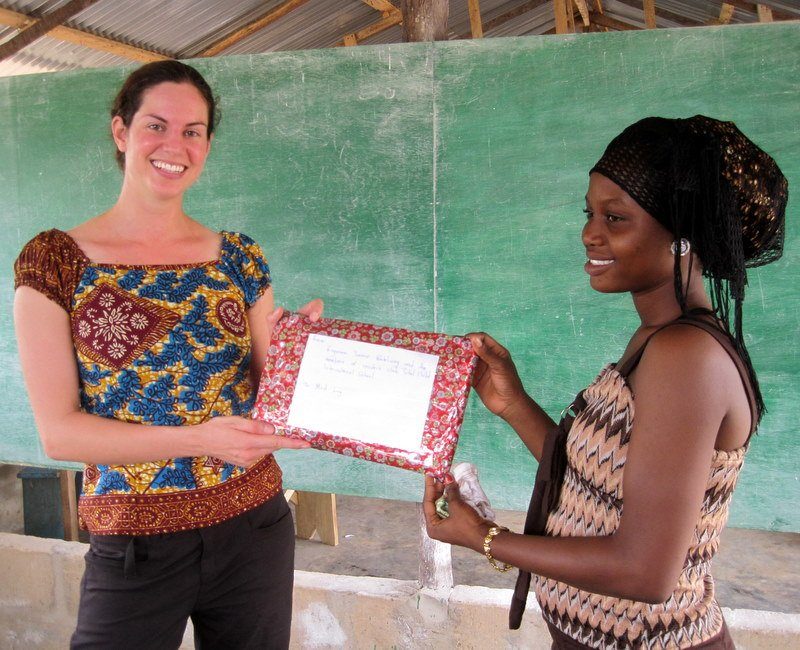 Being presented with a gift from the class.

The drumming ended and we loped, giggling, up to the classroom. All forty children in the Total Child School Reading Club squished onto their wooden benches and craned forward expectantly.

“Madam Lillie,” Yvonne said ceremoniously, picking up a sparkling red and silver wrapped package, “We appreciate all the work you have done with us, and we would like to present you with this gift to say thanks.”

Amazing! I was overjoyed and so touched! “Shall I open it right now?” I asked dramatically, trying to build suspense and excitement for the unveiling, as we do so often back in America.

Hmm… that was odd. 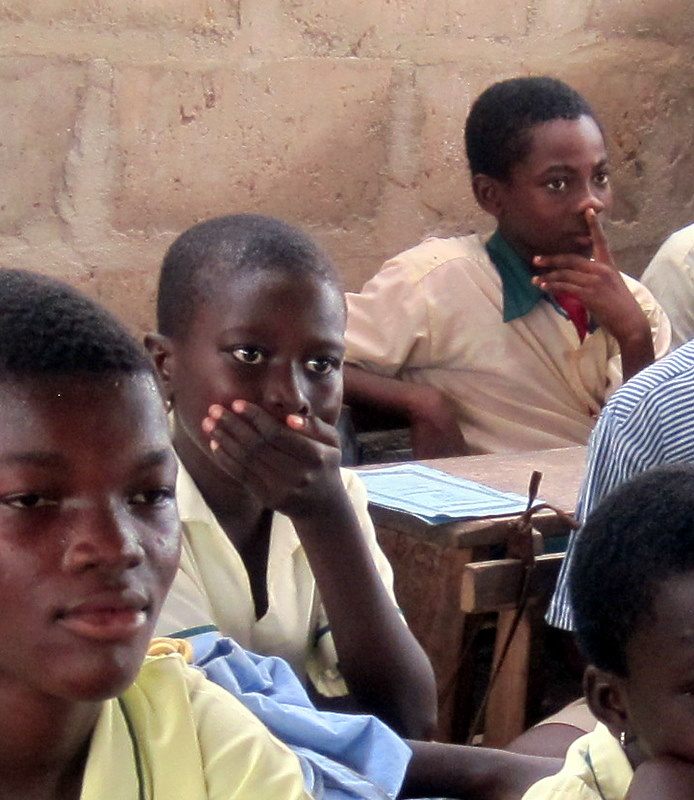 Why were the students looking so shocked?

“Am I supposed to open it in front of them?” I whispered desperately to Oliver, realizing I was entering a cultural confusion castle. Oliver made some gesture with his head that was somewhere between a “No” and a “Yes.” I was awfully confused.

Look at my expression in the photo below as I desperately tried to communicate with Oliver from his position behind the camera. “What do I do now, brother?” my eyes are pleading. Oliver simply made the same half “No” half “Yes” head movement. Oy!

Well, at this point it would have been very rude in America not to proceed with the unwrapping. I mean, these lovely people spent all this time to select a thoughtful gift and wrap it nicely. In my country, when we put in such an effort, we look forward to seeing the look on the recipient’s face when they hungrily rip it open in front of us. How could I let them down? 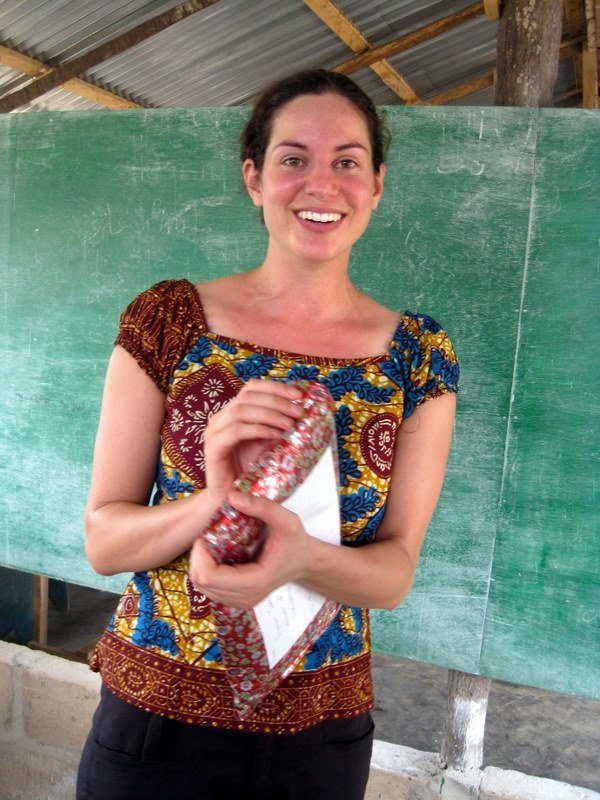 Ripping open the present, not realizing my mistake!

And so I began tearing open the wrapping paper. I was so excited to see what the gift was! I peeked up at the faces in the room and couldn’t quite read them. Happiness? Confusion? Anger? Ah, but how could they NOT want to see the present and my face as I gazed upon it?

“This is as if you took all my most precious dreams and put them in the form of a cloth,” I gushed, choking back tears of emotion. “It is the most perfect gift ever. Thank you so much!” 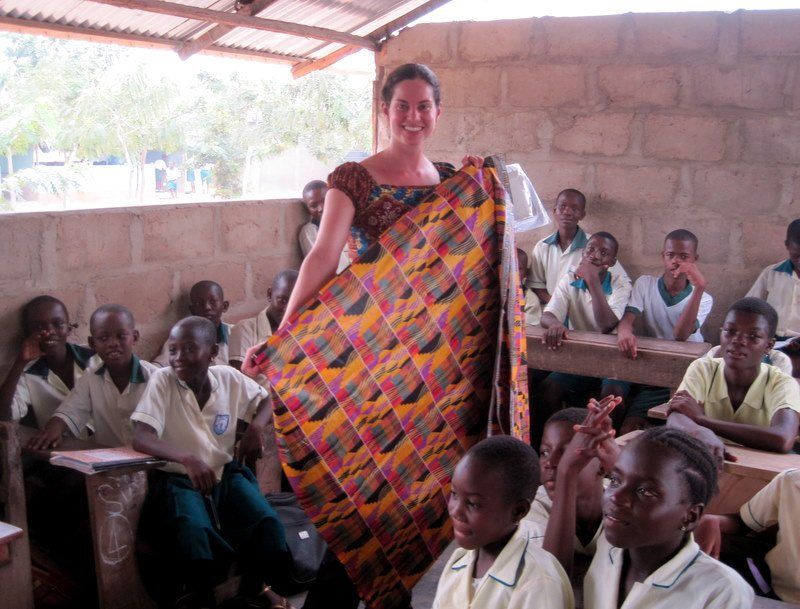 The gift was this gorgeous fabric!

I handed my camera to Oliver to take photos, and he kindly obliged. Again, I noted some strange expressions on the faces of everyone in the classroom. I began, with a sinking feeling, to realize that something, somewhere, had gone terribly wrong.

We snapped all sorts of photos, I gave a heartfelt speech of gratitude (“I will never forget how wonderful Total Child school is!”), and we waved goodbye. On the way out, I saw Madam Yvonne pull Oliver to the side for a hurried private conversation. They both seemed upset. I felt nauseous with unexplained guilt. What had I done?

Our bikes bumped along the rutted road back to the guesthouse and my heart beat with doom. 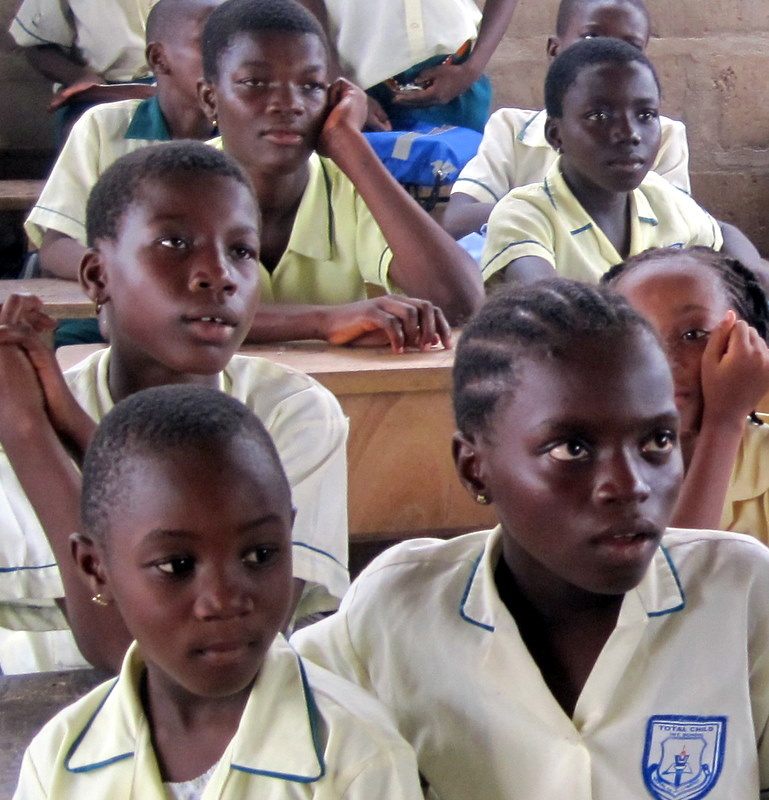 Students were stunned I did something so rude.

At last, Oliver spoke. “You should not have opened the present in front of them,” he said.

“Oh no!” I cried, “I’m so sorry. I was trying to read your face but I thought you might be joking when you said “No.” Why didn’t you just grab my hands and stop me? In my culture it is very rude NOT to open the present, so you should have showed me the right thing to do before I messed up!”

“I didn’t want to embarrass you,” said Oliver.

“But I’m even more embarrassed now!” I wailed. “You should have forcibly stopped me.”

“It will be all right,” said Oliver as we turned left and avoided an oncoming motorcycle. “When Yvonne asked me why you did that, I assured her you didn’t mean to be rude, but it was just your culture. In the end, it will help the children learn that different people do things in different ways around the world… But right now the kids are so shocked! Didn’t you hear them saying, “No!” to stop you?” 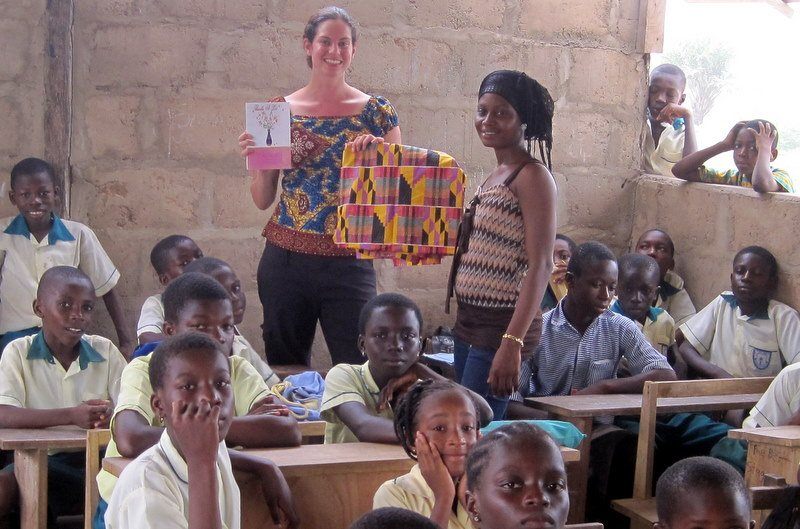 “Can you believe she opened the gift in front of us?!”

I felt absolutely terrible. That wonderful teacher and those forty kids had gone out of their way to get me a stunning gift, and I had reacted incredibly rudely. Argh!

Back in the guesthouse, I told the whole story to YCC’s Director, John, and he laughed heartily. “Yes, it is very bad to open it in front of them. If they had wanted you to see it, they wouldn’t have wrapped it, right?”

“But in my culture,” I sniffled, “They wrap the present because it makes it more exciting when you slash it open!”

“That makes no sense,” said Oliver. “Why would you wrap something just to have it opened? They wrapped it so you could take it home and open it here. Otherwise the surprise is ruined.” 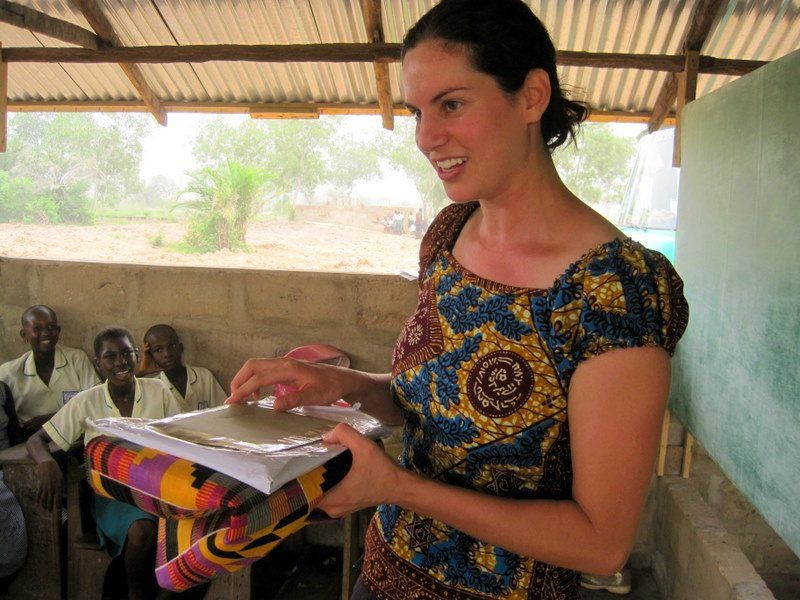 I was just trying to show my appreciation!

“Will you go to the seamstress to make it into another dress?” John asked, trying to change the subject and soothe me.

“Yes!” I said, perking up, “But I need her to re-take my measurements, because all the dresses she’s made me are too tight.”

“WHAT?!” I gasped, clapping my hands to my cheeks in horror. “Did you just call me FAT?”

“HOLY HEAVEN!” I shrieked, “In my culture that is the WORST thing you can say to a woman! How dare you?!”

John, Oliver, and Millicent laughed long and hard. “Here in Ghana,” said John, “The worst thing you can call someone is “skinny.” Saying someone is getting fat is a compliment that makes us smile!” 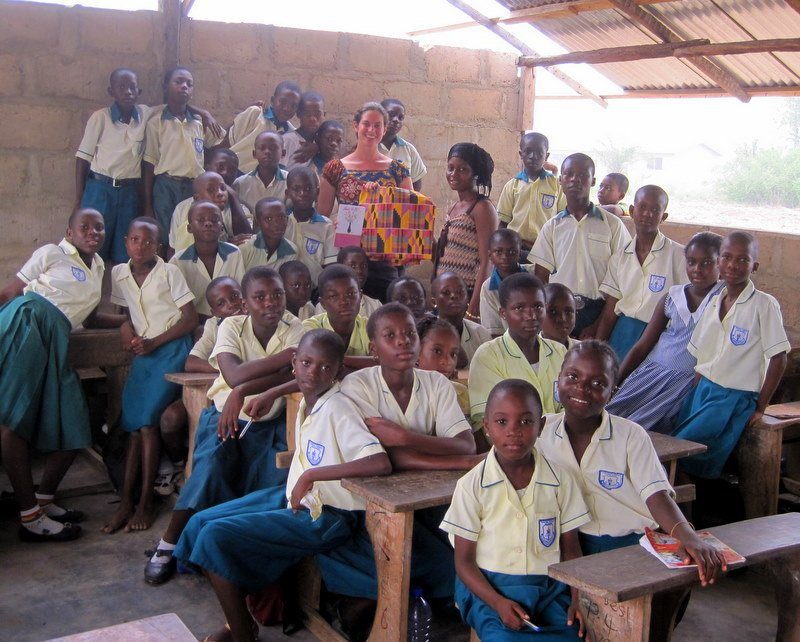 Loved spending time in this school!

At this point, we all collapsed into fits of screaming and laughter then chased each other around the house pretending to fight. And the love and understanding were restored!

Thus, today became the day in which we all offended each other from our heads to our toes, due to cultural differences. However, thanks to the power of communication, humility, and open hearts, I do believe that I may one day be forgiven by those forty lovely children and their kind teacher.

And as for getting chubby, if I have to choose between slimness and Millicent’s banku, I’ll take the banku any day! 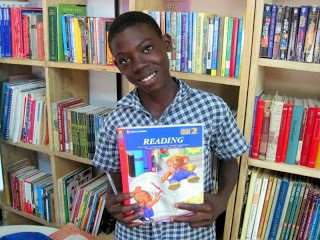 Hi Ms. Marshall! This article cracked me up! This pictures totally help me understand what is going on. A little off topic but I did some digging on google and I found your episode of you finding you wedding dress, lol! Never had a more interesting teacher as you.

Aw thanks, Fiona! All teachers are interesting (actually, all humans are!) but some just write about it more than others. Hehe! For anyone who wants the full story of our reality TV show wedding: https://www.aroundtheworldl.com/2012/09/08/our-wedding-was-on-a-reality-tv-show-details-here/ . It seems they've moved the link to my episode, but you can poke around and try to find it. Enjoy!

Great story, and I agree most American gift givers want you to open the present in front of them. I would have been mortified too, if someone called me fat, even if it was supposed to be a compliment.

Wow, Ms. Marshall. This was extremely interesting to me. But, I think it's the same as things here. If we open a present right in front of their faces for Christmas, that would be considered rude too.

I disagree! In my family, it's rude NOT to open the present in front of the gifter.

How would you describe you time spent in Ghana?

Hi Jena. I LOVED my three months in Ghana. All 90 articles about my time there are here: https://www.aroundtheworldl.com/category/locations/ghana-volunteering/

In China, opening red envelopes in front of the person giving it to you is bad luck because the envelope is used to seal the good luck in. Once you open the envelope, the good luck escapes! :O That's why I open all presents under my pillow. :P