Independence, Development, and a School Toilet 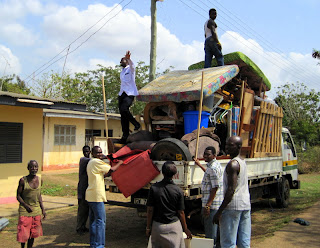 Though Ghana was the first country in Sub-Saharan Africa to declare its independence from colonial rule, having a “birth date” of 1957 still makes Ghana a relatively young nation.

In contrast, my natal country of America declared its independence in 1776. This may be one reason I’ve been thinking a ton lately about how countries at different stages of “development” compare. But sometimes it’s hard to discuss or even articulate these cross-cultural comparisons, especially with those who have never seen your country!

For exactly four weeks now, I have been the only outside volunteer at Youth Creating Change in Sogakope. This means that I have been the only foreigner/whitey/”yevu” around. Although this has actually been more normal-feeling (and even lovely) than one might expect, I sure have had a lot of moments lately of gasping at something that would be totally: “WHOA!” in my native country– but then struggling to explain the “WHOA!”-ness to my Ghanaian friends! 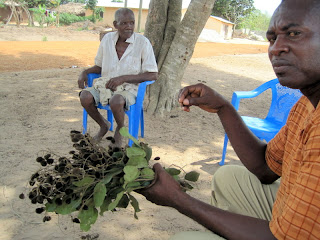 Let me share a few of these interesting moments of cultural contrasts!

1. Transportation… creativity. When our neighbors who ran the store up the road had to pack up and move to Accra, they used the method pictured to the upper left. Look at that truck! And they weren’t even done loading it yet.

In “Developed” Countries, there are often slews of safety rules and regulations enforced by the government because the country’s citizens actually have the means to comply with them, and the government has the means and the time to enforce them.

In “Developing” Countries, however, many of the vehicles chugging down the highways would likely be fined and impounded in the U.S. in a matter of seconds! Similarly, many of the roads here are on the rough side– though some are midway through the process of being upgraded. Bump, bump, bump! 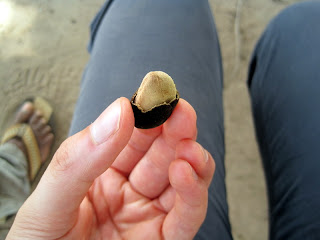 2. Food that would never fly in impatient America. There is this “fruit” that is all the rage in Ghana’s Volta Region, which is pictured in the second and third photos of this article. It is supposedly called a “Blackberry,” though it is nothing like the juicy purple ball of goodness I associate with that name.

Basically, this Ghanaian “Blackberry” it is an exquisitely fuzzy black pod that you snap open to reveal a tiny “fruit” which can only be likened in texture to sofa foam.

Put that tan mass in your mouth. At first it tastes like, well… sofa foam. But then after five seconds, your saliva starts to dissolve the foam, and this sweet, berry-like taste suddenly begins to permeate your mouth. 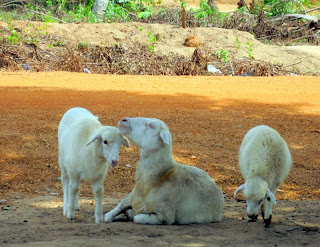 Don’t chew– just suck. Eventually, you will have sucked all the sweetish foam away and encountered the super-hard, shiny, black seed at the center. Spit it onto the dirt ground!

I cannot imagine this food ever selling two bags in the United States. We Americans want things fast! We want things plentiful! Why, in the name of all that is red white and blue, would we ever waste the five full minutes it requires to successfully eat the itty bitty, hardly sweet, strangely foamy fruit known in Ghana as a “Blackberry”? The same goes for the time and effort it takes to pound fufu!

That’s right: the dirty little secret of “Development” (at least in America) is that it brings wild impatience and glistening expectations of instant gratification, NOW! 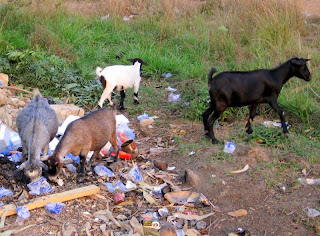 3. Animals!!! Yesterday a herd of one hundred cattle tromped through the guesthouse’s land in search of grass to munch! The bovine beasts were kept in line by two small boys and one small dog. I was terrified! Would the creatures stampede and destroy us???

But no– the hundred cattle munched grass, rubbed their backs on our laundry which was hanging on the clothesline, mooed, then tromped happily away in search of… greener pastures.

Meanwhile, goats, chickens, and sheep abound in streets and yards of Ghana day in and day out. Hello, animals! I never see you in my home city!

Another feature of “Development” that you already know well: it takes us far away from the origins of our food and animalistic fellow Earth-dwellers. That said, movements are now afoot in the First World to reverse this. Did anyone else see the New York Rabbit-Killing Class article? 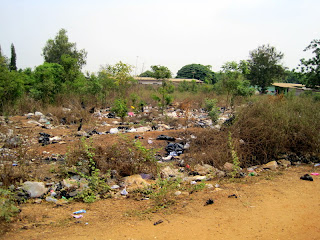 4. Trash, litter, garbage, and rubbish EVERYWHERE. Discarded plastic wrappers and bags are absolutely everywhere on the ground in Ghana. This is really, really upsetting to see, coming from a First World country with the governmental infrastructure and resources to provide trash barrels, regular trash collection services, and nifty street-sweeping vehicles.

I have great hope and many wishes for Ghana’s development in this realm!

4. MONEY: How it is (not) spent and who (doesn’t) have it. On Valentine’s Day, Millicent and I went to a Valentine’s Day Party hosted by a local guesthouse. Though there were many people milling around wistfully outside, the actual party inside was ghostly empty. Why? People explained that the 3 Cedi ($2 U.S. Dollar) entrance fee was too high. Oh! 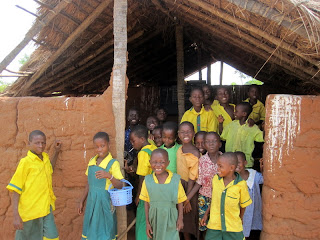 Let me speak for myself: on a daily basis in America, I am used to throwing money towards various $5 to $20 purchases: from a $2 coffee, to a $10 movie, to a $20 shirt. America is a consumer nation and we roll in the “disposable income” to power it.

But there are vast differences between purchasing powers in the general populations of “First World” versus “Developing” countries. Suddenly, with plane ride of a few hours, an unemployed teacher from America can find herself feeling (at times awkwardly) like the richest person in town.

Oh middle-class person from a First World country traveling in the Developing World… You’re really rich! But you’re actually not! But you actually are! But really, you’re not! …You get me? 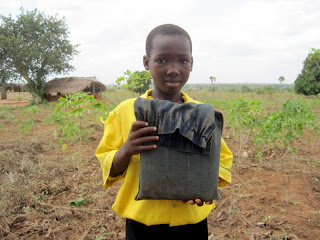 During a recent visit to yet another rural school in Ghana’s Volta Region, I was struck again by how much the school contrasted with the overabundance of American material privilege demonstrated by our youth back home.

The photo to the right is of a young boy displaying his backpack, which had been donated by a foreign visitor one full year ago. Though the straps of the backpack had long since fallen off, the boy still lovingly loads it with books each day and carries it to school.

It is really strange to explain to my current Ghanaian students that, though many of my students in Boston were considered “Low Income” or “Poor,” nearly all those “Poor” American kids had fancy computer-level cell phones, iPods, tons of clothes, and other fancy material goods! 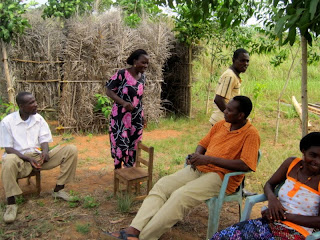 5. The Toilet Situation. You may have noticed that many of the Ghana Student Articles feature… roadside urination. Indeed, that activity is very popular here! Driving or walking down any tiny road or bustling highway in Ghana, you will nearly always pass at least one man peeing by the side of the road. Even women are awfully adept at a roadside squat. It’s a useful talent!

Now, while it’s important to state that there are plenty of Western-style toilets in Ghana (including a lovely set of them at the YCC Guesthouse), and while we honor and celebrate all different environments for bodily waste elimination, please join me in taking a peek at the bathroom situation of that rural school which we recently visited.

The second to last photo in this article (to the upper left) pictures the outside of the school “Urinal,” which is basically a small hidden area created by some leaves and sticks in which you can walk to pee on the ground. 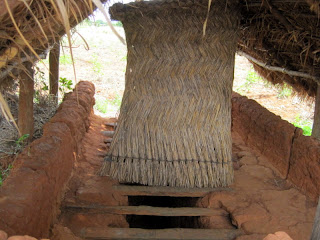 Meanwhile, the photo to the right pictures the– how shall we put this– “Toilet for Not Just Urinating.” Squat down and do your business into the hole through those wooden slats! Just hope no annoying person is peeking in through the open sides of the building.

American kids who complain about your “mad nasty” bathroom: there are pluses and minuses to both the American and Ghanaian versions, aren’t there!

And there you have a few of the scenes from Ghana that have made me go: “WHOA! That’s different from what I grew up with!”

Now, on the occasion of Ghana’s fifty-third birthday, let me sincerely say: “Ghana, you have treated me so well and taught me so much in the past two months. THANK YOU, and may you have many more wonderful birthdays to come! 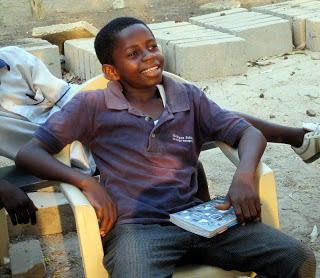 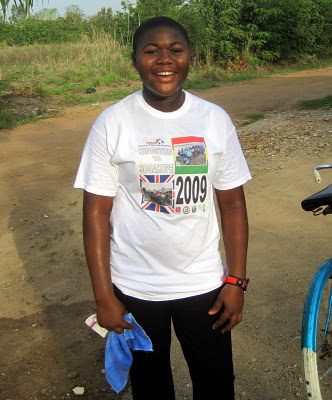 More toilets... according to the title.

True, there are now about 12 toilet articles on this site. It's an important cultural feature, though!

The bathroom in the picture seems much more clean than the girl's bathroom at BLA!

Luddy Sr. said... Wow great post Lillie. I've been thinking about some of the differences that struck me after returning from my trip to Ghana. As Americans we truly have much to learn from people of the develping world.

One of the things that caught my attention is how things rarely go to waste in Ghana. At home a jacket with a broken zipper or ripped pants or an ipod older than 90 days are thrown away without a thought. In Ghana everything is considered fixable, patchable, sewable, sotter-able, and just plain reusable. Seeing these guys try to open and replace my broken battery charger for my digital camera really had me thinking about my consumerism back home. Of course consumerism is the very basis of our entire economy, which seems so incredibly insane and wasteful to me now. Well even more insane and wasteful than before I should say.

Another thing that I noticed was that nobody in Ghana smoked. Nobody. Not a single person. I don't think it's because they're healthy necessarily, I just think that they have enough common sense to know that it is a completely unnecessary thing to spend your money on. Duh. Obviously.

Another thing that they don't spend money on is pets. I'm pretty sure that the thought of buying dog food when you're trying to buy your own food strikes many third world people as outright crazy.

There were dozens of these types of seemingly obvious revelations that I had each day. I guess that's one of the most fascinating things about traveling to different places, having the opportunity to gain a new perspective on things.