Japan, Day 1: Pancakes on Crack and the Kindness of Japan!

Back up: Recap. San Francisco Warehouse party with my awesome brother = the reason I am WAY not hip enough to live in San Fran, but think it rules hardcore. Basically, a bunch of soooo rockstar hip hipsters took over a giant GREASE FACTORY and built cubicles in which to live, as well as fashioned toilets and a giant mosaic-ed shower. Then one hipster drove in a trailer house and started to live there too. Everyone wore plaid. A 15-foot motorboat was tugged in to serve as a permanent podium for a DJ booth. Several wheelchairs were stuck in several greasy corners. Parties are thrown weekly until the hipster crew is tragically evicted next month. A massive, bulbous moonwalk was smushed in between the floor and cobwebbed ceiling for party bouncing purposes. This is the party we attended on my last night in San Fransisco. Huzzah and long live America! :D 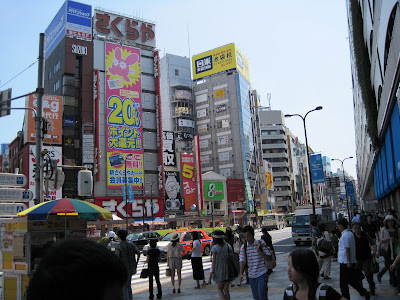 Then: 12 hour plane ride to Japan! Lovely, smooth, movie-filled. I got to chatting with the Japanese woman next to me who was eager to practice her English. “How do you say ‘No?’ in Japanese?” I asked? “Well…” she said, “It’s complicated.” This was my first tip-off to the major cultural differences between Japan and the U.S.

We arrive in Tokyo Narita airport!!!!! My body thinks ’tis 2am! There is bright 3pm sun and a million Japanese people silently rushing around, delightfully ignoring my giant 6-foot body. Nice! To reiterate: the airport is nearly silent. I stumble around in a daze and try to take money out of the ATM. It takes so long for me to try to multiply and divide the exchange rate in my head (math is important, kiddies! Oy.) that the machine spits my card out in disgust. I opt to cash two of my travelers checks instead. Boom: Yen.

Only problem is, the train I was supposed to take to Tokyo had an accident today and is kaput. I stare in utter jet-lagged “huuuuh??” at the ceiling, feeling the silent crowd move all around my giant blue backpack. All of a sudden: “Hello! Hello again!” The woman in pink from the plane! She pulls me to the secret other ticket counter, bippity boppity boo in Japanese with the agent, and suddenly I’m clutching two tickets of different sizes with characters scrawled all over, and am getting VERY intense directions to “GET OFF AT NIPPORI STATION AND TRANSFER TO YAMANOTE LINE! Remember: NIPPORI!!! And do not lose the tickets!” Hooookay. Will do!

I was so thankful I bent to hug the woman, but then remembered that this is not culturally appropriate. By this time the woman had her hand in the air, and in retrospect I think she expected a hearty high five. In my comic confusion, I ended up clutching and shaking her hand… in the air. She muttered, “Weirdo Americans” and urged me on my merry way with a grin. On the train to Tokyo station I sent a puffy cloud of LOVE to the spirit of human kindness. Thank you to the woman in pink!! And then a Japanese couple tapped me on the shoulder and said “The seats are reserved. You are in the wrong train car.” Whoopsie. 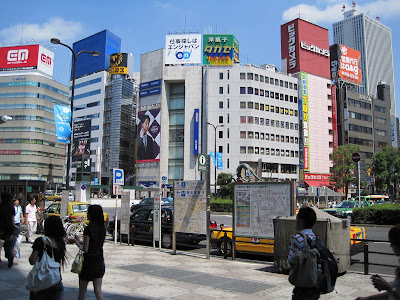 Anyhoo, after the TRANSFER AT NIPPORI STATION (I did not forget!) I descended into the massive depths of Tokyo station to bumble around for an hour until I found the “Giant Silver Bell” that my cousin’s friend Yuki said she would find me at. With the thousands of people streaming through the station, you would be worried this meet-up would be madness, right? Bwahaha but it is EASY when YOU ARE THE ONLY NON-JAPANESE PERSON IN THE ENTIRE STATION! I had heard Japan was homogenous, but this is really, as the kids say, “forcing it”. Almost everyone, everywhere in Japan is Japanese. It’s a lot of homogeneity! But it’s also really nice for finding people who aren’t Japanese :)

Back up a moment to explain: Yuki saved my butt. I was supposed to stay with two different people who had to cancel for various reasons at the last minuto. Then my cousin, who had done the JET program to teach in Japan, gave me the email of his Japanese friend he had met years ago… and the email correspondence between me and Yuki was born. With a mere 1.5 days before I was to arrive in Japan, I timidly begged Yuki to house me on her floor. Bless her warm heart, she agreed.

Dazed, I embraced Yuki for the first time, and we took train after train to her apartment. “Please forgive me,” she said over and over, “It is VERY small, and it is very messy!” I just repeated, “If it weren’t for you, I’d be in one of those freaky Capsule Hotels where you sleep in a coffin-sized box in the wall!” T’was true. I’m a cheap bastard.

In Japan, most people sleep on mats on the floor. 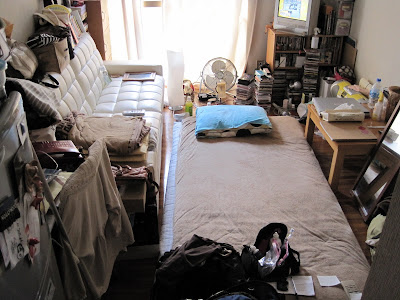 Because I was sleeping on her mat, Yuki so very kindly snuggled up on the small white sofa for the night. But first we went out to Economia-aki (or some such spelling), which is essentially pancakes on crack: Pancakes with (in our case) shrimp, squid, noodles, potatoes, pork, fish flakes, etc. Yum! And also: Holy @@@@.

I slept like an absolute baby, and awoke to find three detailed and kind notes from Yuki, with instructions for the shower, lock, and where to leave the keys for her, as she had to go to work. What a gal!!!! What a lovely, kind welcome to Japan!!!

This is really cool! I've always wanted to go to Japan one day! I would be very confused and lost if I was here in Japan. You are so lucky to be able to travel to lots of cool places! I would like to sleep on mats on the floor, it seems very fun!

Japanese pastry products have a weird taste. Most of them felt almost totally tasteless, just colourful, good-looking, like designer pastry!

Japan is one of the MOST courteous nations on the planet earth..

@ NRT, the bus boy picks your bags and places into the bus @ Taxis, the driver comes to the side and opens the door for you @ Restaurants all the servers just stand and say good bye / welcome to you (I guess) @ Every where else, they greet you with bowing their head.

You are in my favorite country on Earth, and I am supremely jealous. Okonomiyaki is very delicious too, but I can hardly eat an entire one on my own.

Sounds like you're having a great time. Enjoy, can't wait to read more!

Thanks! In fact, this was written a little while ago, so you can see all the Japan articles here: https://www.aroundtheworldl.com/category/locations/japan/ . Thanks for reading and commenting!

I wonder how I will be if I am lost in Tokyo. I think I will most likely be nervous because I hate when I get lost in a big crowd it takes too much struggle to go out and find the right exit!