A quilt of delights from today… 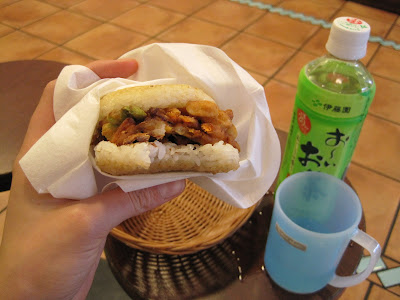 Mike, a friend of a dear friend, has been an AMAZING host, showing me around the city, printing maps and suggested itineraries, and generally being the most fun and kind possible in sharing his 7 years of Tokyo-living experience.

T’was Mike who learned me about this whole rice ball and rice burger business. Want to eat cheap in Japan? The convenience store sells seaweed-wrapped rice wrapped around tuna and mayo… for $1.20!

Want a bit more fast food fun? Mos Burger sells a bun made out of fried rice, puffily enveloping fried veggies or seafood of some kind (pictured above, in case you don’t believe my tale). 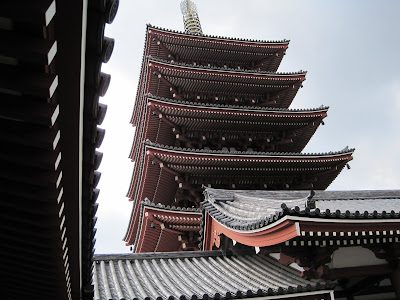 Then I followed Mike’s handy-dandy Subway and Train map to Asakusa and swooped around the incense-steaming temples, each filled with worshipping Japanese.

“What are those papers tied everywhere?” I asked the Japanese man who had chatted me up.

“Oh, those are fortunes,” he said with a suspicious smile. “Wanna take one?”

He laughed uproariously. “You’re right to be scared! This particular temple has the highest percentage of bad fortunes in all of Japan! BwaHA! You SURE you don’t want one???”

We exchanged email addresses and will be the best of friends.

Then, I met and had a lovely talk with a friend of a friend of a son of a co-worker of a daughter’s Aunt (or something like that). We mused about The Life Abroad, and the pros and cons of spending increasing time away from the dear U.S.A.

I mentioned that I had several friends addicted to the Japanese lifestyle, always saying they SHOULD leave, but never really getting around to it, cause it can be oooh so good right here.

Onward! I speed-walked a billion miles to Tokyo tower and snapped some snappy pics. The streets were packed with Japanese folk smiling, laughing, and poppin’ out pictures right alongside me.

Oh– and I loooooove blogging!

Smooches to all, and please DO leave comments, requests, and suggestions! :) 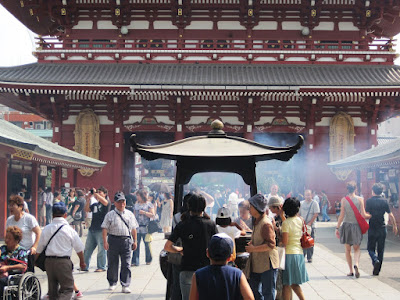 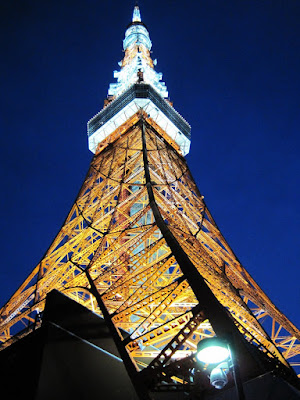