I am confused. What is this strange upward twist of the lips I am seeing here in Laos? I’ve just been in Vietnam for the past month and this expression is unfamiliar. Wait a minute… it’s coming back to me… this expression is known as a “SMILE”! Glory be, Laos is full of them!

That’s right: Laos lives up to the hype. For the past three months that I’ve been traveling around Southeast Asia, everyone has been raving, “This place here is all right, but my favorite country so far was Laos.” 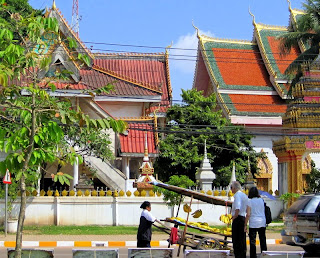 Other tourists add: “Laos is so chilled out, man. The people are nice, the food is damn good, and it’s super-safe.”

Another traveler always pipes in: “And it’s CHEAP. I exchanged a hundred U.S. dollars and got back a stack of one MILLION Laotian Kip!”

When I creakily descended from our 26 hour bus ride to Vientiane from Hanoi, there was no crushing tsunami of moto and taxi drivers screaming, “RIDE, MISS???” like in Vietnam, Cambodia, or Thailand. Rather, one gentleman quietly asked if I would like to go into town in his rainbow colored tuk tuk, and I smiled, bargained the price, and hopped on. 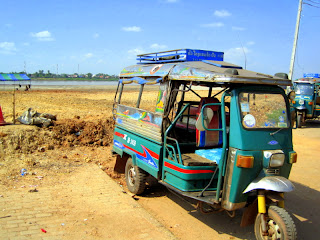 We chugged around for about forty five minutes to the far corners of this farm-and-chicken-filled country capital, dropping off each of the shyly smiling Laotians who had been sitting beside me in the tuk tuk. I scrambled to read the street signs and landmarks, cross-referencing with my dear Lonely Planet map of Vientiane in the Laos chapter, and finally hollered to the driver, “Stop here please!” 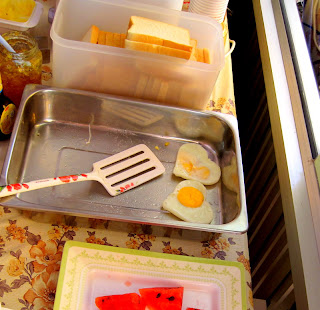 Out I went, was politely turned away at three hotels that were full (Laos is getting popular, man!), then landed upon a delightful $6 a night place.

The hotel is clean, friendly (smiles again!), and boasts a giant free breakfast included in the price. You really can’t go wrong with a complimentary breakfast that features eggs cooked in heart shapes.

After a MAJOR shower, out for a happy solo dinner I went. 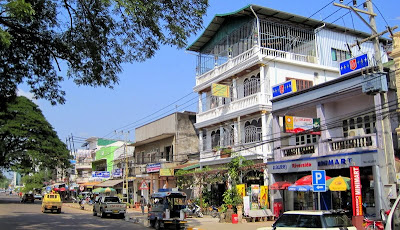 I nearly hugged the waiters when I realized that they could banter. I love bantering! Vietnam did not to banter with me. In general, the level of English proficiency here is much higher than in Vietnam, too.

“Don’t sleep on Laos,” a friend advised me before leaving Boston. “It’s the hot, up-and-coming destination.”

Indeed, all along the calm Mekong River by the rainbow cafe street of Vientiane’s center, construction is quietly chugging along. I predict that in a few years, the entire Vientiane riverfront will be lined with lovely waterside cafes like the two that are there already.

I don’t think this development will happen in a sleazy way, either. I have full faith that Laos can develop this tourist thing while still maintaining its smiling warmth.

Want to be a hip, happy, and cutting-edge traveler, AND save money? Consider Laos! 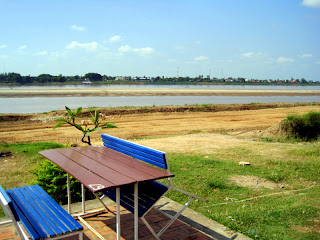 Previous Post: « 30 Hours on a Bus With No Bathroom
Next Post: Another Reason Travel in Southeast Asia is Easy! »