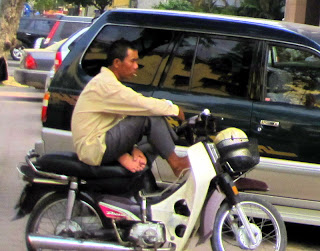 Here are three differences between American culture and Vietnamese culture that have to do with being closer, physically, to the Earth.

1. Feet. I went to college with a fellow who never wore shoes, even in winter. He also walked around frequently with a giant live boa constrictor around his neck, and was generally considered to be an eccentric (though likable) hippie freak. 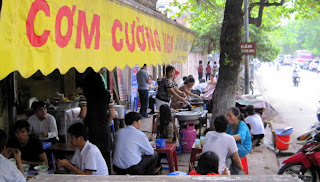 It is seen as rather odd in our urban American culture to be barefoot for extended time.

However, this Vietnamese man, pictured, left, in Hanoi, would disagree. All right– so the man’s knock-off Chaco sandals are sitting in a heap below his cozied form, but the bottom line is that Vietnam is far more tolerant of the bottom of feet than is America . 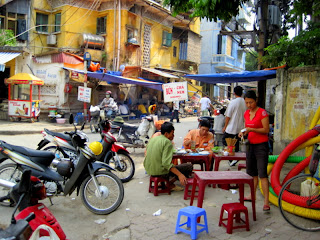 2. Squatting Stools. We have delicate backs, us Westerners. Above the age of ten, we gripe and moan like infants if forced into small, backless chairs. It’s just not adult, is it? It does not support the lumbar region.

Now for something completely different…

Check out these photos of Hanoi, Vietnam. Throughout this entire country, every block sports eateries that spill onto the sidewalk like those shown in the photos. Squatting happily on one-foot-high red and blue plastic stools outside these food stalls are hoards of Vietnamese folks, slurping on Pho or chomping down Com (steamed rice with hot meat and vegetable side dishes).

These same baby plastic stools are utilized in the aisles of buses when plush seat capacity fills.

I’ve also seen students biking to school, clutching the stools precariously in their arms as they ride, so they will have a place to sit to learn.

Who started this trend in Vietnam, I wonder? One thing is for sure: Whoever manufactures these stools is now very rich! 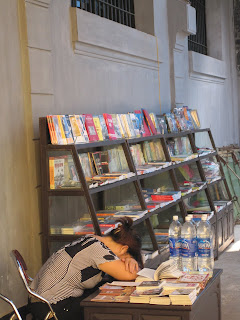 3. Flopping down at work. A final cultural difference, this time in the workplace: the Mid-Work-Shift Snooze of Vietnam. Note the tranquil nap of the Hanoi Hoa Lo Prison Museum guard, left.

This restful tactic is also displayed by taxi drivers, napping while parked on a curb, with their seat reclined and their feet on the windshield, and by hotel clerks, sprawled in repose on a lobby bench or hammock.

You, blog reader– Are you at work right now? Look at your luscious expanse of desk… Yawn a bit and consider taking a few Zzz’s, protesting when your boss wakes you up, “I am cosmopolitan-ly exploring world cultures!”

While you’re at it, take off your shoes.