Observations About Rome in December 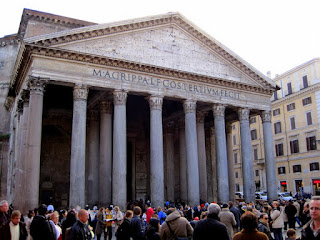 What beautiful and fascinating sights might you see if you wandered the chilly cobblestones of Rome in late December?

1. Ruins preserved smack-dab in the center of a living metropolis. It’s heartbreaking if you think about it: Ancient Rome was the greatest civilization around, and yet it crumbled.

Today, in the middle of this thriving city, we still stare at the ancient kingdom’s rubble.

Doesn’t it give you an icy shiver, reminding you of our mortality? 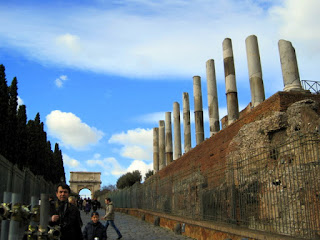 “And on the pedestal, these words appear:
‘My name is Ozymandias, king of kings:
Look upon my works ye might and despair!’
Nothing beside remains. Round the decay
Of that colossal wreck, boundless and bare
The lone and level sands stretch far away.”

The hubris ancient Rome had to build these awe-inspiring structures, and the tragedy and exhilaration that two thousand years later, they’re gone, but still here! 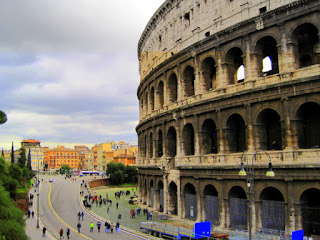 2. There are a lot of tourists here now. Outside the major sights, an ocean of fuzzy-hatted heads points and snaps photos. That said, the atmosphere is loving and reverent. I felt good being part of that particular tourist sea!

Who are these tourists? In contrast to the youthful, party-hearty backpackers of Southeast Asia, the majority of tourists I saw today were couples and families in their thirties and older, most with young children.

As for nationality, I heard a ton of Spanish and French lilting through the winter air, but almost an equal amount of Italian: Italians from other parts of the country sightseeing in their capital, or sometimes just normal folks going about their day and caught up in the tourist froth. 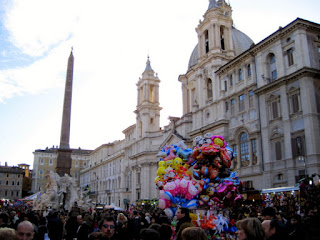 Judging from the population in this hostel, however, there are sightseers here from all corners of the world: Asia, Albania, America, and more. Neat!

3. Tons and tons of stores selling pizza, pasta, and gelato ice cream. Mmm!! Why are the tomatoes here so much fresher and more flavorful than American tomatoes??

4. A nice rainbow of racial diversity. It was lovely to walk through the predominantly African-Italian neighborhood on the walk to the Colosseum! After five months surrounded by Southeast Asian locals and White tourists, my eyes are happy to see a wider range of humanity. 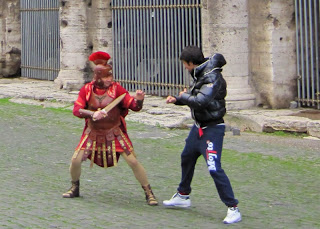 I seem to remember Europe as a whole has some odd racial dynamics, but from a brief walk-through, let’s embrace that Rome has a great mix of folks.

5. The Italian language really is as passionate, flowery, and exciting to listen to as they say! Sitting in the pizzeria eating my lunch, I eavesdropped left and right, and couldn’t help but smile and feel a warming of my heart.

Maybe only one country in the entire world speaks Italian, but it’s a fantastic language! 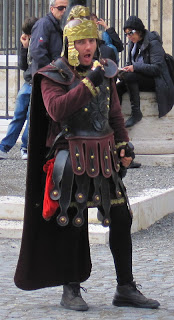 6. Lots of guys dressed up like Roman Gladiators. It’s hilarious to watch them check their cell phones and stuff their faces with sandwiches when they think no one is looking.

Word on the street (well, from one of my hostel dorm buddies) is that they charge as much as 30 Euro (about $45!) after they lure you into a photo op!

7. Graffiti. There is quite a bit of spray painted writing scrawled across Rome, but a lot of it is of the awesomest kind: passionate declarations of love!

That said, what do we make of the “Cripz” tag outside the Colosseum, pictured to the lower right? Is this “Cripz” as in the “Bloods and Crips” gang rivalry of America?? 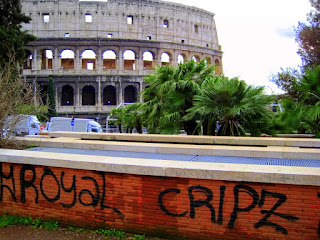 8. Old fashioned stuff abounds, from the toilets to the doors. Ahh, indeed, we are in history-steeped Europe! In funny ways, “Developing Countries” like Thailand can sometimes be outwardly more advanced and shiny than “Developed” countries like Italy. Example: Bangkok’s Airport is a glistening work of modern art. Italy’s is a little scruffy, but has delightful character.

Meanwhile, the Italian doors tower five feet above my six foot self, and the toilets flush by a button releasing a watery torrent from a raised cistern!

9. A really strange similarity (in my creative mind) to old Havana, Cuba. Not that I was in Cuba last summer, because that would be illegal given that I’m American, but I feel a distinct connection between the aesthetics of Rome and la Habana: towering, crumbling beauties of old buildings, narrow cobblestone streets with yellow paint caressing the walls, and a wander suddenly spilling you out into a plaza with cafes on the sidewalk. Beautiful! 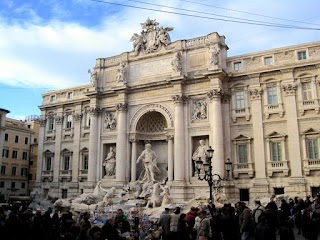 9. Street traffic that is far saner and easy to cross than Vietnam or Thailand! This is clearly a function of me recovering from the madness of Southeast Asian motorcycle and tuk-tuk filled insanity, but I am LOVING how calm the streets here seem in contrast!

Our shuttle bus from the airport zipped along with nary a traffic jam, and today I was able to use STREET LIGHTS (haven’t seen those puppies in ages) and crosswalks to keep my stride zooming forward.

It was really debilitating in Saigon and Hanoi and Bangkok to constantly live in terror of motorcycles hitting me– both on the street and the sidewalk. A whole section my brain is now doing a dance of joy.

10. Rome is a pretty, pretty city with a delicious vibe. It feels warm-hearted, sexy historically rich, passionate, and confident here. I imagine it would be fascinating to live in this fine city for a time, and really get to know it deeply! 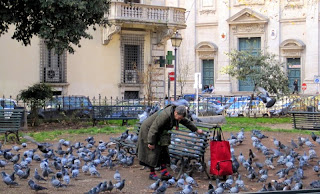 But it’s cold now, it’s expensive, and my family is flying in to meet me three hours north in Florence, carrying a bundle of warm clothes from Boston, and tons of love. I can’t wait to see them!

This article is auto-programmed to publish so I can fully focus on my loved ones, but tomorrow, get psyched for the start of articles about Florence! Stay tuned, stay warm, and keep those great comments coming!

Nine Years Ago on this Bridge in Rome...
← Read Last Post

The reason why tomatoes taste so much better is that GMOs are banned in Europe.

Wonderful. Thank you. Made my morning.

Two odd ball things I really remember from Rome was the cappuccino bar in the Coliseum and all the CATS... :-)

Rome In December sounds like a good song title. Just saying haha. The very last picture strangely reminds me of Boston. I love the way you described the Italian language as flowery. I'd love to go there.

I really enjoyed reading this article. Some things were really strange, like how some people dress as gladiators! Thats insane! I think that it is strange how there is less traffic. This is because isnt Rome suppoused to be really visited by tourists? Thats why there would be lots people, which means lots of traffic. But I guess not. Reading this also really makes me want to go to Rome some time, that would be fun!

Thanks for your comment, Ariana! In fact Rome does have traffic, but the reason it seemed so little to me is that I had recently come from Vietnam, where there is CRAZY, CRAZY traffic. Check out this article for photos of Vietnam's traffic: https://www.aroundtheworldl.com/2009/10/02/trust-and-traveling-enter-vietnam/