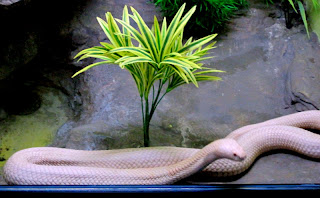 I had been warned of the lies, but experiencing them in person really slaps you.

“Where you try to go?” asked the Thai man on the street, seeing me and Adie discreetly pull out our Bangkok map. “Snake farm,” said Adie, studying the tiny blue lines on the paper.

Startled, we decided now we really HAD to see it. Especially because it was right next to the Red Cross. Suspicious. Hilarious . 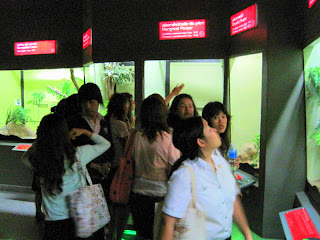 As we walked the final half block, another Thai man blocked our path. “Snake farm closed today,” he declared. “Oh!” We wavered in our steps. “You come with me to other place,” he said. “Better. Open.” 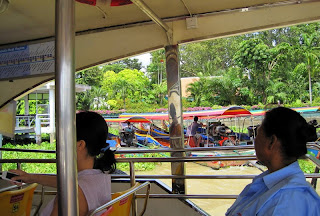 Suddenly, I remembered a warning about the lies. “We’ll check it out anyway, thank you,” I said, striding away with Adie in tow. The man started flailing, following, and blubbering: “Well not closed, not open, but really…” 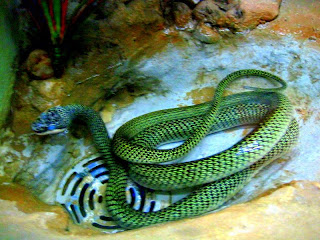 And then we were there: Snake Farm! Guess what… t’was fully OPEN. Lies! Tuk tuk treachery: if an exhibition nearby is closed, the clueless tourist will be forced to ride clear across Bangkok for the next attraction. Awfully clever.

So into the building we went. Happily, “The Snake Farm” turned out NOT to be the name of a gay club on the male side of Patpong Road. Rather, it is a fun little farm with live and dead snakes! Adie and I ogled snakes for several hours alongside giggling schoolgirls in their black and white uniforms, and enjoyed ourselves thoroughly before moving on to the next… lie! 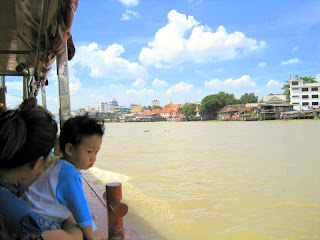 We took the Skytrain to the river, and eagerly pranced towards the brown water and the boats. Suddenly, a Thai man darted in front of us, looking awfully concerned. “No boats now,” he panted, “water is too low in the river. No boats for many hours.” He looked at his watch, terribly sorry for our plight. “You come now in my private boat though, just 500 Baht!” We paused for a moment to consider, then noticed the surging mustard-colored waves just beyond the man’s shoulder. “There’s LOADS of wahtah out theah!” laughed Adie, and we skipped past the chap towards the public boats. What a nice ride up and down the city to our destinations! 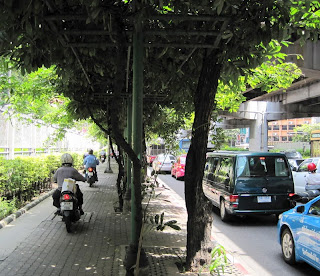 A final Bangkok lie of the day: The word “Sidewalk”. On the way to the Grand Palace, Adie and I were innocently strolling down the sidewalk next to a highway when we heard an ominous “VROOM!!” I whipped around just in time to pull my tattooed chef friend into the bush as not one motorcycle but SEVENTEEN zoomed off the highway and right on down the sidewalk to evade the crushing traffic. Yeeek!

At the end of our lovely day, I made a mental note to my sweaty self: keep your heart and mind open and happy, but keep those ears perked for lies, and that body coiled to MOVE whenever you hear “VROOM!” 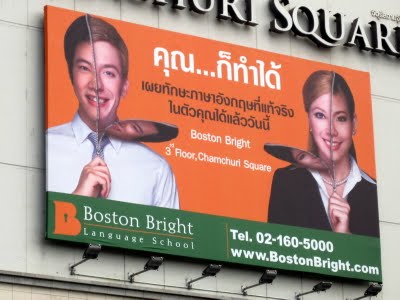 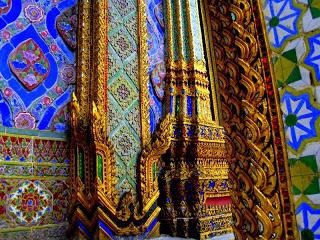 I am sure I would have completely believed in everything they said ... too sad :-(

Ms. M you have a very open mind if it were me i would have fallen for all those lies!

I experienced the zooming motorscooters and bikes on the sidewalks in China, too.

Joanna said... That's crazy, I would have a hard time getting my head around the fact that people would just outright lie to you to cheat you out of money...though I guess it happens all the time...