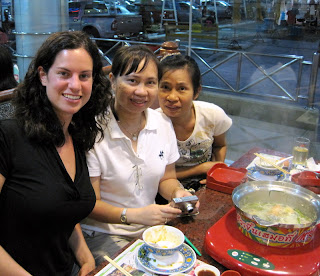 It is midnight in Phuket, Thailand, and I am in room 5 of my 5-room poolside, near-beach house… for which I am paying $14 tonight, due to a woven braid of human kindness and connections.

A week before my trip’s first flight, I donned a polka-dot dress for to visit my sweet mother’s place of employment. It was fun, and made me proud of my mother! It was also the first thread in the braid. During the eighth co-worker handshake, my mother’s co-worker revealed that he had spent many years in Thailand teaching U.S. workplace skills in a refugee camp for U.S.-bound Southeast Asians. Several days later, I received an email from that co-worker’s former co-worker in that refugee camp. In another week, I had another jolly email from a Thai woman who had worked with the two Americans. Her name was Jum, and she is amazing. 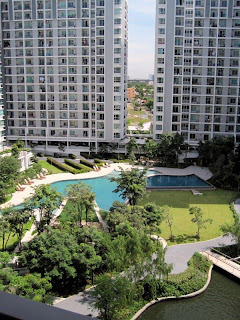 The emails flew fast and furious, and the phenomenal result was that, after a smooth, pink and purple colored, green tea ice-cream filled flight on Thai Airways, I was GREETED AT THE AIRPORT by Jum’s niece who held a sign with my name on it! I felt like a very lucky celebrity. We drove with Jum’s sister to Jum’s office, where I embraced Jum and thanked her, and where she revealed that she hadn’t slept in two days because she was running her 24-hour store nearly herself, since she’d been forced to lay off two employees, but she wanted to stay awake to greet me. 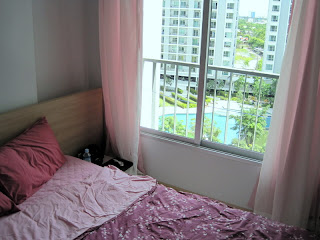 Off we went to Jum’s sister’s recently-purchased condo. Um, wow. So, first off, the section of (surprisingly giant) Bangkok I saw (the forty-minute radius around the airport) is a glittering, modern wonder, draped with the bright magenta pink (especially the taxis!!) and swirly curly Thai writing. Jum’s sister’s condo was all that times ten million. WOW. The sisters took me to a DELICIOUS Thai meal and chat (note the steaming hot pot into which we dumped veggies, fish, meat and herbs), took me to their nephew’s condo to email my family, then left me the keys to the condo, and left me to gape at the pool view from the eighth floor. Photos both left and right. WOW. 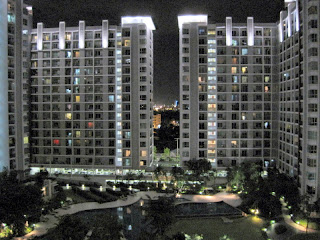 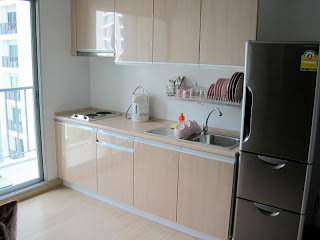 After another mmm Thai meal with Jum’s sister and niece (see the picture of how the giant mall has hundreds of fresh food stalls in the middle!), they drove me to the airport (again– WOW) for my hastily-arranged trip to the cheapest beach flight I could find: Phuket. You may know the name Phuket because it was one of the epicenters of the deadly tsunami five years ago, but is also known as one of the most glorious and famous beaches in Thailand. 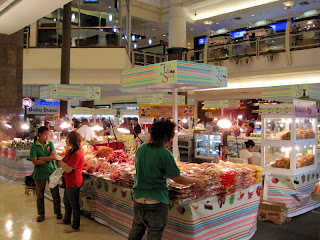 Side note: Thai Airways is incredible. Not only are the flight attendants all dressed in magenta silk, but the planes are GIANT (with a first class cabin which resembles office cubicles), and you are treated like royalty.

Phuket! An hour and a half in a taxi to the southern tip of the island to meet up with Jum’s old friend Peter, who came to Thailand from Germany ten years ago, and married a lovely Thai woman. Peter and his wife (now, alas, ex-wife) welcomed me delightfully, then drove me to Peter’s friend Elton’s hotel: the Yanui Paradise Resort. 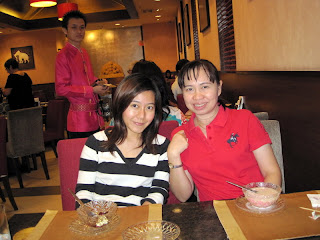 “Sorry,” Elton said in his thick English accent, “The smaller rooms are taken already, so I’ll have to give you the giant King Suite for the same price.” He threw open the door to a mansion.

So works the braid of human kindness and connection. A ringing “Thank You!!” shouted outwards to all the wonderful folks, and a prayer that such loveliness continues for the next 7.5 months :)