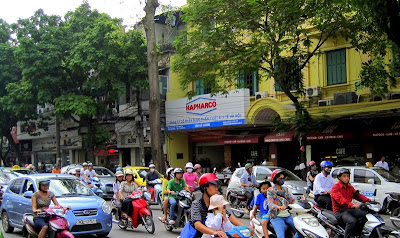 The famous author from whom I bought my dear little Asus eee PC threw me a sharp Facebook message in response to one of my status updates. “What happened to the computer?” he typed. “I leave for Kabul in 30 hours. Give me the lowdown.”

So I did. “At exactly the same moment I was being groped on a moving motorcycle atop a mountain in rural Vietnam,” I replied, “a shock from the speeding vehicle fried our dear hard-drive. Stinks. But $65 later, I think the new one is doing ok. I’ll keep our baby safer in the future, I promise. Now keep yourself safe in Kabul!” 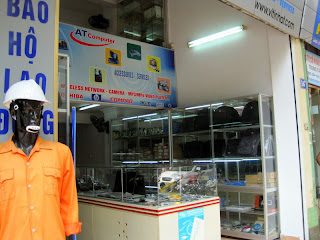 The tale of the $65 Asus Resurrection of Hanoi is fittingly ridiculous.

Online research produced the name and address of a reputable laptop repair store on Hanoi’s “Computer Street”, Ly Nam De. Easy enough. I trotted the mile from the hostel to the address (or rather, sprinted and prayed for my life whilst dodging insane motorcycles).

Perhaps I should have realized I’d made an error when I walked in the small shop and the Vietnamese teenage boy behind the counter began tittering like a hysterical schoolgirl. Turned out the technician lad spoke absolutely NO English. Like, ZERO. And yet, we communicated shockingly all right through the powers of… Google Translator!

Here’s how it worked: I handed him the computer, the chap turned it on and giggled as it made a croaking sound then sputtered out an error message. The boy typed a Vietnamese sentence into Google Translator and I peered over to the English equivalent. “Hard Drive deceased” was the somber verdict. Crap. 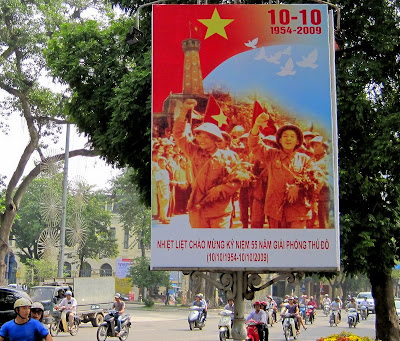 Back and forth we went with our robotic translator as the boy pried apart my computer and began replacing parts, translating each price and waiting for my nod.

This technician’s fingernails were REALLY long. Shockingly long and yellow. After the fellow dropped two of my Asus’s tiny screws onto the floor he scrabbled around on the dusty tiles, his talons making a scraping sound until they scooped up the screws like a backhoe scoops dirt. When he giggled, he covered his mouth with his hand and his fingernails almost reached his ears.

I went away for an hour to get food and money (and photograph Communist propaganda signs, right) while the technician installed bootleg $5 Microsoft Windows. When I came back he typed a Vietnamese word into the translator and it vomited up: “Seventh.” “Huh?” I asked, utterly bewildered. He tried again, changing the Vietnamese word to something Google wouldn’t botch. “Tomorrow,” revised the computer interpreter. Grrr… so back to the hostel I went, praying that my computer wouldn’t be sold for scrap overnight. 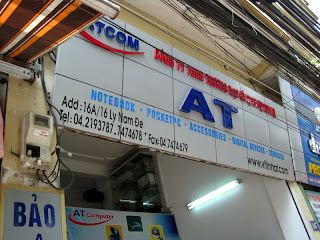 In the morning when I went back to Computer Street, I was slapped with two nasty shocks.

1) The store had utterly disappeared! Seriously! I walked back and forth for blocks, frantic, and could not find it at all!

2) (Perhaps explaining number one) I realized that the store to which I had entrusted my computer was NOT the one recommended online! The online-sanctioned store was at 16A Ly Nam De… but it turned out that there was an entire BLOCK AND ALLEY of stores labeled 16A/1 to 16A/50! The store I had stumbled upon was a no-name at 16A/16!!! Seriously– who has seen such a complex numbering system before?? It was an honest mistake.

Panting and giving up hope, I scampered back and forth along the street. As usual, there was hardly any sidewalk (and if there was, men were crouching in the middle of it on red plastic stools, slurping coffee or Pho), so this involved more motorcycle dodging. My computer was lost! I lamented. Stolen! Kidnapped! De– WAIT! FINGERNAILS!

On the fifth pace back through 16A/1 to 16A/50 I finally found my tittering technician! He was tapping away on my (functional!) netbook with his giant nails, flirting on Yahoo chat. My Asus was alive! I was about to smother my little ebony baby in kisses, but the fellow pushed me away and began wiping the computer down with antiseptic. Umm… I will now repress any thoughts of what he and my Asus got up to the previous night. 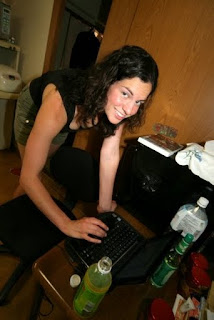 I test-drove a few computer functions, then gratefully paid the man the $65 for the labor, the new hard drive, and the bootleg Windows. I tried to explain to him that I was going to publish an article about his miracle work and asked if I could take his photo. He splayed his left fingernail fingers across his giggling face and waved the right index fingernail in a shy but vehement “No photo!” Ah well. I covertly photographed what I could as I left the store and blew it a kiss.

So the Asus lives! It’s not totally, shall we say, “normal” (random things are still in Vietnamese, and various settings are buggy), and Toto’s 80’s classic ballad, “Africa” is now erased, but my warm, fuzzy screen is back to me, and that means I’m back to you all even more obsessively. 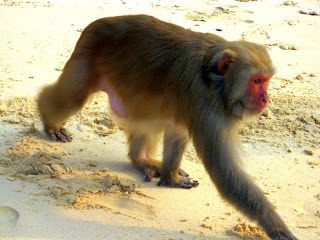 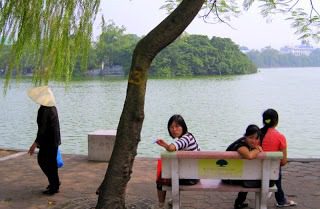 Great post and thank you !! I can imagine what that sleepless night must have been as it happened to me too in south east asia with my MacBook Air - omg !!! Seriously never knew till then that gadgets are such an important part of our day to day lives & we care about them so much :-)

Yes! Our gadgets have a shockingly big place in our hearts!

Haha, great story. I have had numerous such Google Translate conversations about me though, not a computer. With my lactose intolerance and too many languages on this trip, Google Translate has saved me from intestinal woes numerous times!

That is quite gross that he had long, yellow finger nails. I heard somewhere that the hygiene in most asian countries are not too great so I guess this is what you'd expect. I really though he took away your laptop, I would hate it if that ever happened to me especially in a foreign country!

eli said... glad to hear that it worked out!