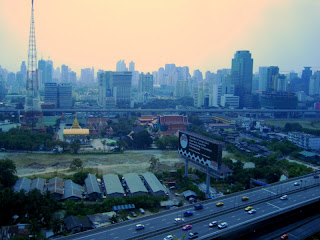 I sincerely hope, as you read the title of this article, that you pictured a wee virus wearing a tiny coat lined with silver sequins.

Watch him prance around flamboyantly in his flashy outfit! Cute little guy.

That image just about sums up the series of snags and their silver sequin linings that occurred over my past twenty-four hours. Here’s an account of what happened.

Last night at approximately one in the morning, it became clear that my dear little netbook had become a cesspool of viri, thanks, surprise surprise, to the crazy cheap bootleg version of Windows that I bought in Vietnam. 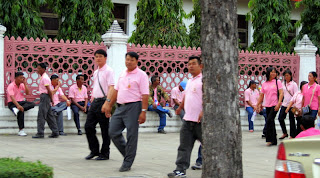 Things on my Asus started freezing and spazzing. When I tried to go to anti-virus sites, the browser just blocked my progress and crashed. I panicked.

Resulting Silver Sequins #1:
I did what any modern women might do in a panic: I publicly freaked out on Twitter.

Three minutes later, a complete stranger all the way in Australia tweeted back saying he had downloaded two powerful anti-virus software programs to his website so I could use them to clean my nasty comp. 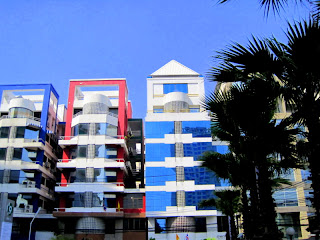 Sixty minutes and four hundred and eighty viruses identified and slaughtered later, I was bowing down to the power of the cyber-universe and to the deep kindness of strangers. “TheAussieNomad.com”, you’ve got some SERIOUS good karma coming your way for your good deed! THANK YOU!

Snag #2: A visa to Ghana (my destination in early January) takes at least three to five days to process. (Noo!! I’m ready to leave Bangkok already!) Moreover, it requires the following truckload of documents: 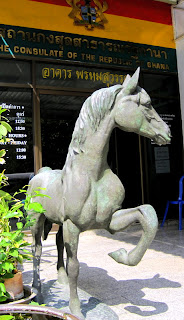 c) A letter of invitation from Ghana (emailed to me by my fantastic contact in the nick of time!)

e) A passport that is valid for at least six more months (though the website says “four moths”, so I considered capturing some fluttery fellows from my hotel room) 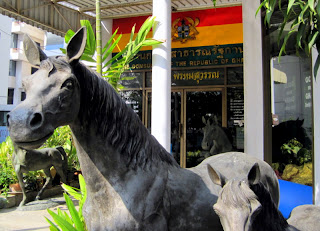 Resulting Silver Sequins #2: Unlike yesterday, the Ghana Consulate of Bangkok was open today! A big sign on the door behind the pretty horse statues (pictured, right and left) read: “Visas shall take no less than 3 days to process”. I grumbled and walked up to the counter.

The extremely kind and helpful clerk took my documents, one by one, had me fill out the application form, and then essentially told me the following blessed phrase: “If you throw money at this problem, it will go away”. 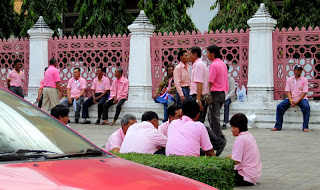 After piling an extra 900 Baht ($27) upon the hefty official visa fee, I was promised that I would get a visa pasted into my passport within five hours. Five hours??!! AWESOME!!!

Snag #3: Five hours is kind of an annoying time to wait in a random part of Bangkok, and the cab ride away and back would be too expensive to be worth it. So what to do, what to do?

Resulting Silver Sequins #3: Though I started going positively batty by hour four, it was kind of cool to wander around a totally new part of Thailand’s capital. You can’t really be bored in a ‘hood with buildings titled both “The Lord” and “The Love Boat Club” (pictured, lower right)! 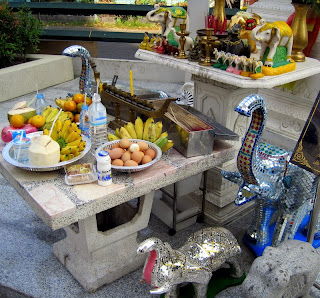 I found a cheap clothing market (that’s like my catnip!) and slapped myself in the face until I walked away.

I ate some organic brown rice and veggies at a new age yoga cafe nestled behind the massage parlors behind the Ghana Consulate.

I took a photo of the Buddhist shrine outside of the Praram Kao Hospital (pictured, right) because I LOVE how in Thailand, holy offerings include yogurt drinks, bottled water with straws, and plastic wrapped cakes.

I tried to use the WiFi internet in three different cafes in the ground floor of the Hospital, and when it failed to work each time, I was told by each waiter: “Some day we have internet, some day, no.” 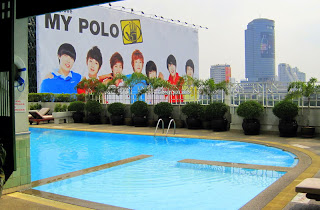 And the crowning glory of it all was sneaking into the plush Radisson Hotel. I sipped the most expensive juice of my life, all the while snapping panoramic photos of the sprawling, smoggy-blue Bangkok skyline (pictured in this article’s lead photo), and the billboard-backed azure swimming pool (pictured left).

Finally, it was 3pm and I triumphantly picked up my completed visa. HOORAY!!! 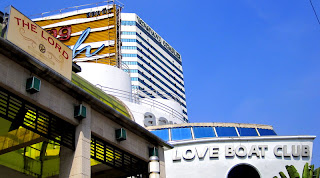 Snag #4: The Bangkok traffic at 3:10 pm was so bad that the supposedly thirty minute taxi ride back to my hotel took an hour and a half.

Resulting Silver Sequins #4: Part of the reason for the even-crazier-than-usual traffic in Bangkok was the residual celebration after the Thai King’s eighty-second birthday. This meant that the streets were choked with jubilant celebrants, all wearing the King’s color: a delightful pale pink! 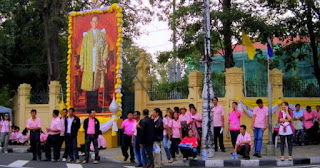 (I bet you were wondering why all the folks in the second and sixth photos of this article were dressed like that… and now you know!)

So all this is to say that in the past twenty-four hours, I have: purchased my Ghana plane tickets, affirmed my belief in the goodness of humanity, obtained my Ghana visa, seen Bangkok from twenty-five stories in the air, and learned the meaning of the color pink in Thailand. Nice! 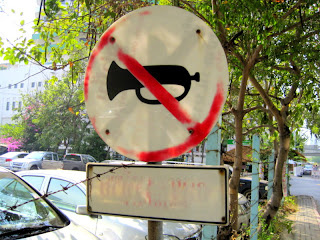 One final thing… I KNOW this sign, pictured to the right, is supposed to mean “Don’t beep your horns because this is a hospital area and you will disturb the patients”.

BUT. Wouldn’t it be sooooo much cooler if it actually meant: “We are SICK AND TIRED of your all-cornet marching bands”?

I would have panicked if my computer has a bunch of virus. But, luckily I can reboot my computer.

Chris said... Now I can add IT support in bangkok to my resume eh :) Just glad you got it sorted. I need to ensure my latest reading material continues to flow through my news reader.

backpackingranny said... YAY! I am super happy about your Ghana visa. What a powerful and productive day you had!

Dave said... I think a patented Lil doodle of a silver-sequined virus is in order! Maybe a late-Elvis style getup? :)

Ha!! Just kidding, how could you not trust someone named back packin granny?