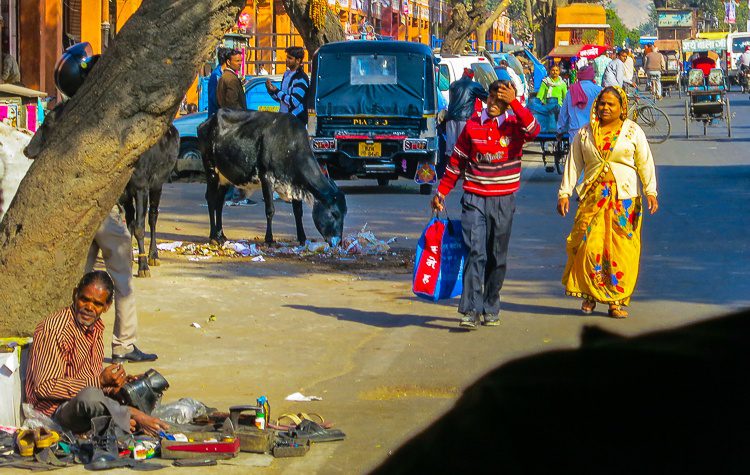 This photo reveals at least 4 reasons for India’s intense odors….

I am REALLY glad that we traveled to India before I got pregnant. A bionic sense of smell is a major pregnancy symptom, and given the infamous odors of India, that would have been a problem.

Yes, it is true that India has more smells– both delicious and noxious– than any other country you may visit. Why? See the photo above for four reasons: street animals (and their resulting dung), vehicle traffic, piles of trash, and random street vendors. 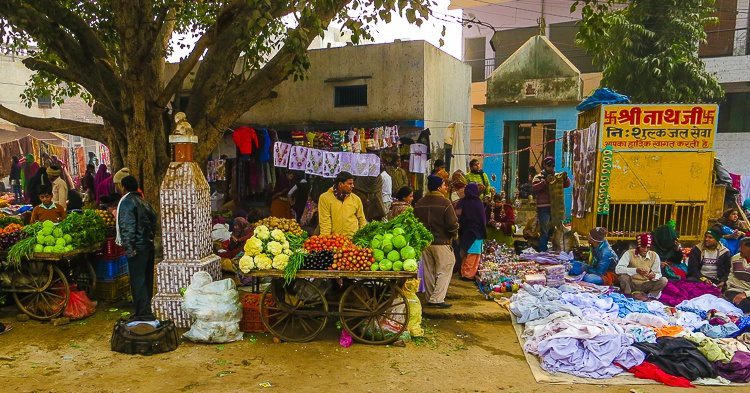 Still other India odors exude from the sheer number and density of people in India (1.24 BILLION people in a far smaller area than the U.S.), the many markets (yummy food both cooking and rotting), and the prevalence of public urination (or even… defecation). 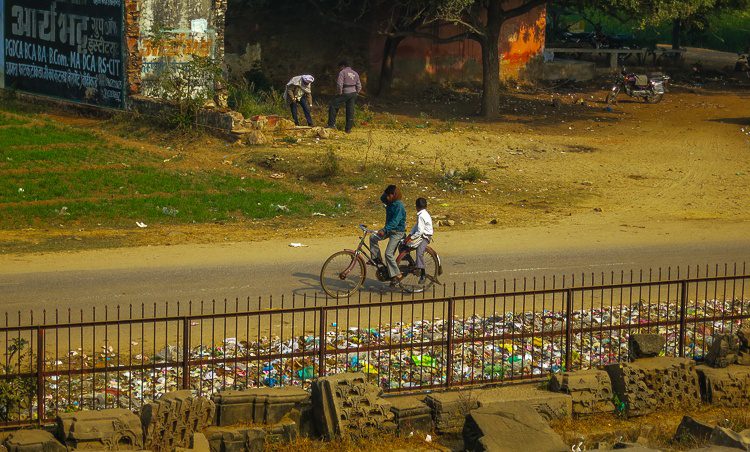 Trash outside a temple in central India.

What Colin and I weren’t prepared for during India travel, however, was the crazy odor situation in certain luxury hotels. You see, in an effort to make their hotel as “sanitized” and “fancy” as possible, several of the high-end hotels we stayed in sprayed odor-saturated chemicals like crazy, and the result… stunk. 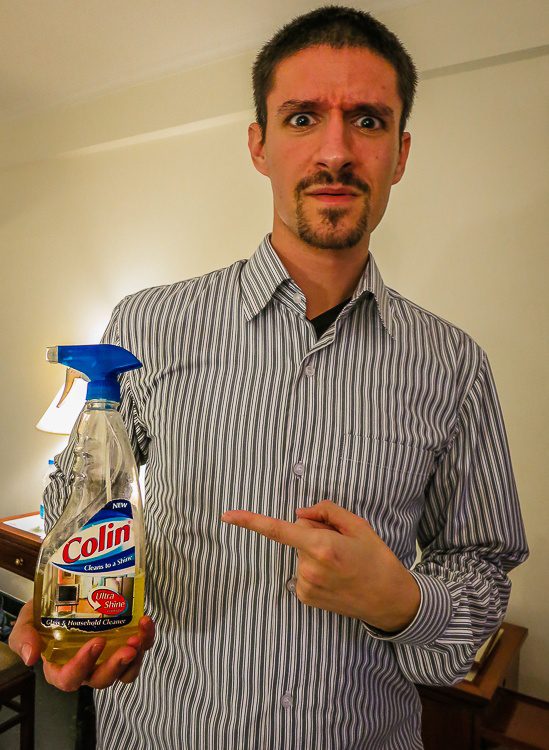 Shocked by the odors to “sanitize” our luxury hotel… and that the “cleaning” spray has the same name as my husband?!

Most shocking was our luxury hotel in Agra, where we stayed the night before seeing the Taj Mahal. Upon entering the glittery hotel, our nostrils were accosted by a chemical stench equivalent to nails on a chalkboard.

Sleeve tight over my nose, I ran to the management. It turned out the smell was because the hotel doused its entire property in industrial strength insecticide “as a service to its guests.”

When we entered our room and realized the smell was just as bad in there, we tried to open the window, but it was locked. I called downstairs to see if the hotel could help unlock the pane and get us some less chemical-y air.

With delightful five-star service, a knock came at our door in two short minutes.

“I am here to help with the smell!” a hotel employee declared, striding into the room and whipping out… a bottle of cleaning chemicals, which he began spraying into the air.

“Wait!” I squeaked, choking on the chemical particles. “Can you please just open the window?” Confused, the employee ceased his spraying and unlocked the portal to fresh(er) air instead… but not before we saw the name of the cleaning chemical, pictured above: Colin. Who knew that my husband was also a fresh yellow spray?

Resources to assist your nose and lungs:

All this aside, know that travel to India is SO worth it. Click here to see all my India articles, and glimpse how gorgeous and fascinating the country is. Happy travels!

Don't be worried! It's such a great place!

This is really interesting. It reminds me of when my mother, father, and I went to Haiti and walked past this river/stream. It smelt horrible!. It smelt like that because, when my mother lived in Haiti that's where they bathed animals of all sorts

Interesting article.. and yes I was born and raised in India. I think I have memorized the smell with the places I have been and as I was reading the article I recalled almost all of the good memories and the smell associated with them.

E.g. The railway stations have a very distinctive smell which I have always thought was delicious (lol, I know its contrary) was actually caused by the Strong Insecticide they spray across the tracks (the train toilets directly discharge the waste to the tracks) and similarly, if you are in Mumbai CST area and walking around in early morning, all you smell is Incense Sticks being burnt at the temple, along with some tea and if you are in Southern India, all the smell that comes is from freshly made breakfast (Dosa, Sambhar etc) mixed with the smell of Incense Sticks smell..

I miss that exotic land and its memories..

Thanks for sharing. It was worth reading!

India is quite an assault on the senses, isn´t it? My first moments in India I felt like I stepped into one big public restroom..but I have to say that smells can be the worst but also the best things about this country. I loved those rich aromas of incense and spices! Evening walks were my favorite part in Dehli - people were lighting incense to attract this or that god and you could smell fresh spices from the roadside snack stalls...mmm, not bad at all:)