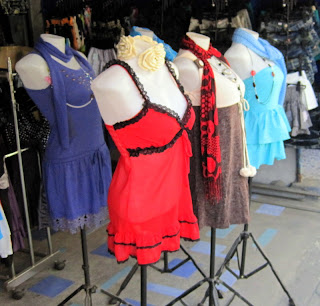 “A question, please,” said my classmate Olivia shyly. “In Brazil we don’t have this idea, but I hear that in America and Europe, Thai massage sometimes is, um… well… how you say…”

“Linked with prostitution?” I asked.
Olivia’s face lit up and then flushed bright red. “Um, yes.”
“Oh absolutely!” I said, thinking of all the joke emails from friends I currently have in my Inbox in reaction to the news that I’m taking a Thai Massage course. The majority of these emails go like this: 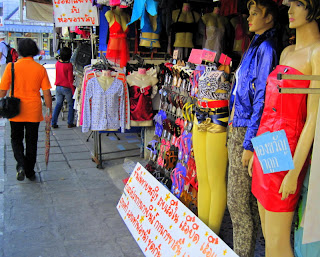 “Hoo boy! Which week do they teach you the happy ending?”
Oh my. Different kind of Thai massage, folks!
So here’s the deal: there IS a ton of prostitution in Southeast Asia, and most famously, in Thailand.

According to a 2004 issue of The Nation (pictured, left), Thailand has an estimated 2,800,000 sex workers, comprising 4% of the population here. This is one out of every 24 people in Thailand involved in prostitution. That’s a lot! 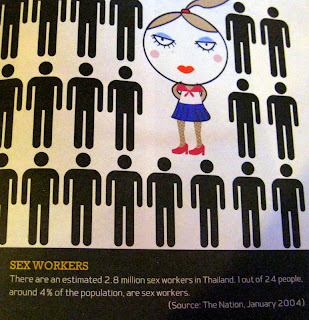 Sometimes the sex trade here is blatant, as in the “ping pong shows” and other yonically acrobatic displays on Patpong Road, or such as the fact that tuk tuk drivers will persistantly ask single male travelers, “You want boom boom?”

Most often, however, the sex shop display sign is more subtle, and reads simply: “Massage”. How’s an innocent traveling pup to know which are the real Thai massage parlors, and which are those that provide those certain special services at the end?

On day one of our (non-prostitution!) massage course, the lead instructor gave us the following advice: 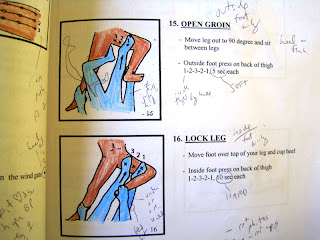 He gave us a big wink and a smile, and everyone giggled. Prostitution is so prevalent here, everyone is always referring to it. For better or worse, these references are usually accompanied by chuckles and a sense of humor.

But let’s put prostitution aside for a moment and talk about a certain racy facet of legitimate Thai massage: the positions are shockingly intimate! Check out some of the diagrams from my instruction manual to the right (artfully colored in as part of our homework) and imagine yourself practicing those moves without blushing. 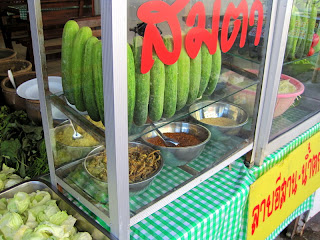 About seven times in class today, our instructors had to say, “Now very careful this move, because now we get near the Michael Jackson area!” (Yes, that’s right– I’m representing this concept with a photo of a cucumber street vendor, left.)
Real Thai massage involves pressing your feet and hands everywhere as you lift and twist and push against the receiver’s body. For many who don’t know what to expect when they enter a Thai massage, the experience is less relaxing than they expected, and more like physical therapy.
One instructor explained: “Some call Thai massage ‘Lazy Person Yoga’. Receiver lie there and masseuse pull the body into yoga position for lazy bum.” 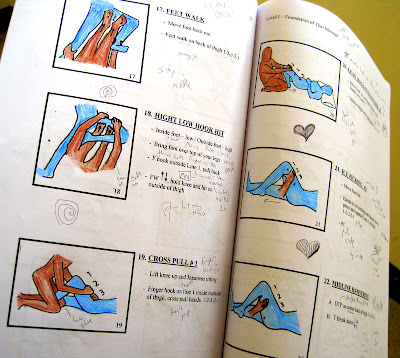 The stretching and twisting in Thai massage can be overly intense for some, and several tourists I’ve met have been injured by an untrained spine cracking move during a massage.
That’s dangerous. But equally dangerous, in my scaredy-cat massaging hands’ opinion is negotiating that “Michael Jackson Area”.

“You don’t go high enough!” reprimanded the French woman I was partnered with today. “Point three is all the way up here by zee groin, not down by zee knee!”

I’ve spent so much of my life NOT putting my hands all over random strangers that it is an odd thing to start practicing it daily.

It is a tricky task communicating enough with my massage partners to make the whole endeavor respectful… and respectable! But it is endlessly fascinating, and I am thrilled to be in this course. Stay tuned for more!

Day One at my Thai Massage School!
← Read Last Post

At first I think this is a passage about Thailand massage and thinking its just like normal massage from other places. Until I saw this essay I didn't notice most massage place in Thailand is involved with prostitution. And i didn't know there was a Michael Jackson area. Did you try some massaging moves mentioned in the manual? Hope you did enjoy your massage in Thailand.

Most massage places aren't fronts for prostitution. A lot of the places tourists frequent do, but the normal places for Thais are usually just massage parlors. Thai massage is considered a medical and spiritual practice.

This is all you need to know to find a legitimate massage parlor. Don't go to a place where people are calling you to come in and only has women massaging. The best place to go to is a Thai temple, which offers the best quality and cheapest massages.

Now that I think of it, southeast Asia is in fact involved in a lot of prostitution. I was watching a documentary of a teenage girl from Cambodia named Minh, she was sex trafficked by her own parents to make extra money. It's horrible.

Everything under the Sun said... Thailand prostitution stats are scary, just check from your teacher how did the Thai massage evolve , i can read a link between the prostitution and Thai massage.

If Thai massage has these moves in the books, it's really easy to see how it could develop into "Happy Endings" for a little extra cash. Real easy.