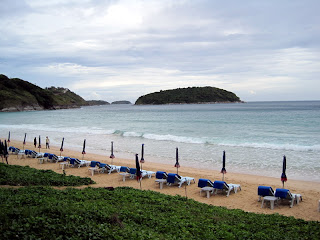 You are on the southern tip of Phuket, near Nai Han. Mopeds race, bzzz-ing, ’round the twisted hill roads, and light blue waves smash through the rain onto rocky beaches. This is not so much a tourist place as a place to set up a life after middle age with a Thai bride, or perhaps a place to punch others in the face via Muay Thai boxing, or perhaps a place to chill if you are a “Thai sea gypsy” (still haven’t figured out what this means), or perhaps this is your home, if you’re just a regular Thai person. Or maybe you’re me– a self-identified “contrary tourist”– who gets great joy out of the random situations of life that, shall we say, aren’t really normal :)

So let’s say you’re here. What do you notice? 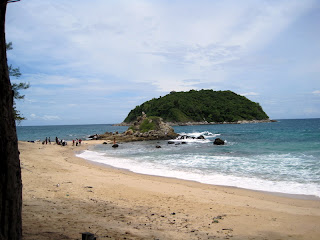 1. Low Season. ‘Tis rainy season, which is low season, which means low prices, fewer tourists, and less sun! Sounds good to me :) “Come here in November,” the hotel owner, Elton, explained in his growl-y English accent, “and the water (woooh–tah) literally changes overnight into a beautiful light green. Until then they don’t really clear the beach, so it has lots of driftwood and stuff on it, and it’s really dangerous to swim cause of the riptides and rocks.” Sure enough, after mo-pedding to two beaches today, my friend and I saw about 1,000 giant red flags which screamed, “Don’t swim!!! Dangerous!” Yea, there were tons of folks in the water anyway (glistening under the gray rainclouds), but we delighted ourselves merely to wade and soak up the tranquility of being seaside that calms my Boston-born heart. 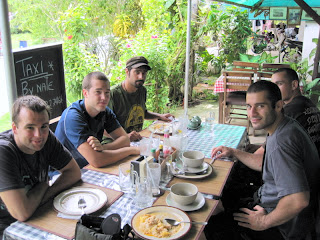 2. Boxers!!! Ok, so it’s me in my own giant suite in this hotel with about twenty middle-aged Australian men and their Thai girlfriends, AND (it now turns out) about twenty Muay Thai boxers (pictured in their natural habitat– eating curry). Good thing I’m good at being one of the dudes :) I thank my brother for that! Anyhoo, folks come from all over the world to Thailand to train in the BRUTAL boxing art known as Muay Thai, wherein you box as usual, but ALSO (goodie!) you can smash the opponent with ELBOWS OR KNEES!!! Last night me and the dudes watched about four Muay Thai “best of” videos, and the usual end is this combo knee-elbow-punch deal that leaves the opponent as a heap of clothes on the ground. Before coming to Thailand I toyed with the idea of taking some Muay Thai classes here. In college I also toyed with the idea of joining the Marines. I have some idiotic ideas. No Muay Thai for me! 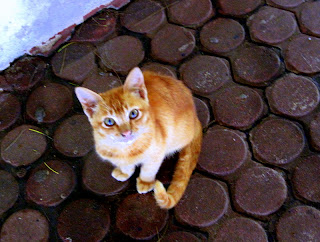 3. Feet: Ew! Feet are considered NASTY here. One of the boxers explained that he was waiting 3 hours to get a tattoo from a monk with ink made from the ashes of deceased monks (um…), and during hour 3 of waiting, he stretched out his legs to shift position… and all the Thais almost punched him in the face in horror. Conversely, the head is considered sacred, and thus in Thailand you are not supposed to playfully muss someone’s hair or (in Muay Thai) kick someone in the head (though if they’re younger than you it’s apparently slightly more ok).

4. Food. THE. FOOD. IS. SO. GOOD. For about $2-$3 a plate, I’ve had feasts of coconut, chicken, shrimp, veggie curry with the most luxurious flavors!!! The chillies are hot, however, and today on the beach I tried to be tough and chomped down a whole little red fella, thus causing water to drip from every pore of my body and the world in general to spin and squinch around vertiginously. It was kind of like a cool roller coaster ride, once I emerged from the other side! 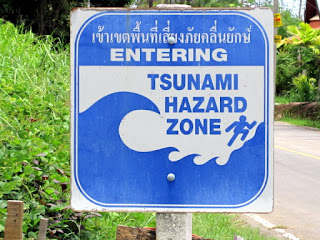 5. Dogs (and to a lesser extent, cats)… They are EVERYWHERE. Weird. And also cute. (Don’t cuddle them, though– fleas!)

6. The Tsunami’s Aftermath. Everywhere, there are warning signs like the one I photographed. Our hotel owner said he had drank too much Christmas eve and thus was passed out until one in the afternoon on the 26th, at which point he got a phone call that there was carnage all over the beach a few meters away and he was needed to help clean up. Meanwhile, my German friend Peter said that when he woke up, a dead body had been thrown to 100 feet away from his house. He went around cleaning up corpses in his car, and he said the eyeballs had swollen to the size of golfballs, and the smell stayed in his car for months. “You know what, though?” he said with admiration, “The Thai people are amazing. They rallied together to clean up, and they never let their spirits down. The town has almost totally recovered.” This leads to the final feature of Thailand that we shall discuss tonight… 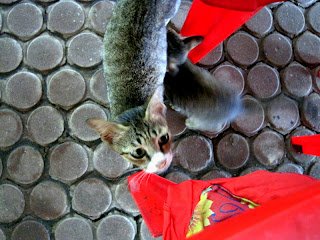 7. Smiles! In Thai culture it is NOT OK to be visibly angry. Rather, it is (officially) The Land of Smiles. Everyone is SO NICE and smiley! Wonderful! :D

I’m off into town to a Massage Parlor to attend the birthday party of Peter’s ex-wife’s 2-year old daughter (who is not Peter’s but who the ex-wife had while she was still married to Peter…). Food, music, fascinating people… I hope to bring back many a story :)

These articles are my favorite because they are very unusual and it gives you a feel for another interesting culture.

Luddy Sr. said... There should be a reaction box for 'delicious.' I want to go just to get a 2 dollar plate of food!