How can you bear to do it? How can you send the baby of your womb out across oceans, into this wild, scary world? Moreover, how the heck do you help pay for it?

The roosters sprinted across the yellow dust between the parents of YCC children and the YCC staff as John stood up to speak. He started the meeting at 2:20, only twenty minutes later than scheduled, which is vast progress for YCC’s goal of changing the prevalent anti-punctuality culture.

John spoke in Ewe, so Godfred had to whisper translations in my ear between his secretarial note-taking duties. The facts John laid out were as follows: 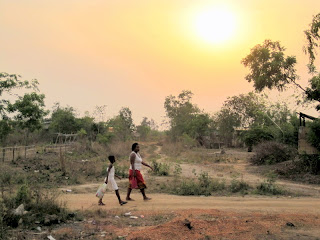 1. In 2009, a group of British students from Kingston, England came to stay with YCC students in Sogakope, Ghana for three weeks. They had a wonderful time, attending workshops on West African history, giving workshops of their own, staying with the Ghanaian families, sightseeing, and forming friendships across cultures.

2. Like Britain itself, the British student delegation that visited Sogakope was widely multicultural, with students who were originally from China, Nigeria, Turkey, Sri Lanka, France, Guyana, and more. They were able to give the Ghanaian students presentations on their ancestral cultures, meaning that this cross-cultural exchange was actually a super duper cross-cross-criss-cross cultural exchange!

3. In August of 2010, twelve YCC Ghana students will be forty percent funded by the Commonwealth to travel with four YCC staff members to Britain to fulfill the reciprocal half of the cross-cultural exchange. This will be the first time out of Africa (and for many, the first time out of Ghana) for every student and teacher involved. 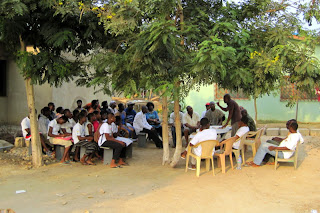 4. There are five more children from YCC who dream of going on this cross-ocean journey, but there is no funding for their plane tickets– a cost of approximately $1,200 each.

5. Basically none of the YCC students have passports, and about half do not have birth certificates. The cost of getting an express birth certificate is twenty Ghana Cedis (about fifteen dollars), plus a bunch of paperwork and some waiting. As for passports…

6. Ghana is currently undergoing a change in its passports, from “Non-biometric” to “Biometric” (aka: high-tech and scannable), but these new passports will not be available until April. For the Commonwealth to provide its funding for the YCC students, the students need to submit their passport details (and therefore need to HAVE passports) by February fifteenth. According to the immigration officer who attended the meeting today, the cost of getting a rush passport by then (old fashioned, non-biometric style, of course), would be two hundred and fifty dollars. 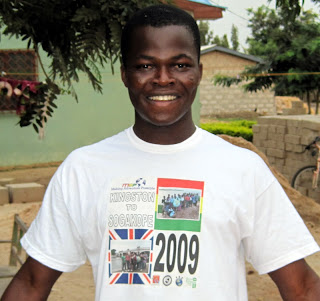 So those were the facts. My head swirled with the stress of surmounting these looming obstacles. I felt sure that at least half of the parents sitting on the benches under that rustling tree grove would stand up in a fury and stomp back home.

I got up and thanked the parents and students and staff, and Collins stood at my side to translate into Ewe.

“You are doing the right thing by being here,” I said, “because travel can seem frightening, or expensive, or difficult, but it is one of the most important things you can do in life, and it is worth sacrificing for.”

I explained that a similar month-long foreign exchange program leaving from the U.S. usually costs around $4,000, and the parents gasped in shock. This meant that even if the Sogakope families pay $300 or even $800, that is an incredibly good deal, not to mention the opportunity of a lifetime. 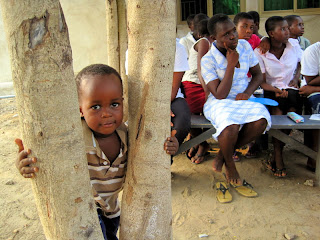 I emphasized a recently-realized fact that awed me: in most exchange arrangements, the leaders take a portion of the parents’ payment for themselves as compensation. In the case of YCC, however, each of the teachers will need to raise funds himself, and none will take any form of payment. The YCC staff members are literally some of the most honest people I have met in my life, and every day provides a new example of this.

I thanked the parents and students and sat back down. One by one, various mothers and fathers stood up and asked questions or made long speeches in Ewe. Godfred’s pen was racing across his secretarial paper and so I was only able to get scattered translations. The voices were loud and passionate, and I began to fear that some parents were angry. 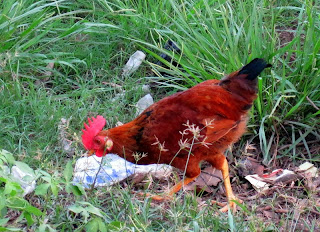 John handed me his secondhand laptop so I could email a few travel agent contacts about airfares that might be less expensive than the $1,200 per person British Airways Accra-London flight quoted.

One vigilant mother kept chucking pebbles at the roosters nearby.

“SQUAK!” the roosters would gasp, offended, as a stone hit her bum. “How dare you! I’m going back over to that trash heap.”

One woman’s gorgeous toddler son toddled around making ga–ga noises until his brother Seth gently shushed him and pulled him onto his lap.

The Evangelical church next door had been going strong with belting song for four hours, now, and the sun began to slant down in the sky. 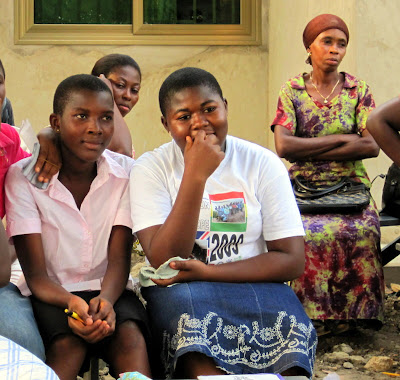 Several hours passed, and the speeches seemed to be getting to interesting conclusions. Close to sunset, a father called us all into fervent call and answer prayer, and the meeting came to a close!

For a reason that I didn’t then understand, everyone rushed towards Wisdom as he opened an Obama notebook and took out a pen.

So what was the conclusion??? Godfred smiled and laid it out.

1. The parents had all agreed to find the money to pay the rush Passport fees that very week, as well as the birth certificate fees for those who had none. Wisdom had stepped up to organize and collect the money as well as write down the students’ correct, full names so that he could go to the offices today and begin the paperwork process.

2. Every parent had agreed to pay any extra money they could afford, and thus pool their resources, in order to try to pay for the five students without funding to fly to London. As one father had apparently said in Ewe, “All hands are not created the same, and so we must pitch in with our strong hands if others cannot.” 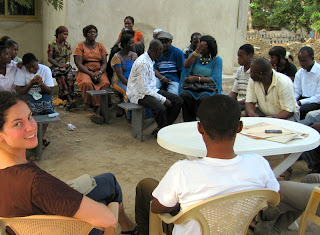 3. All the parents and students were on board to do what it would take to make this amazing exchange happen!

I was stunned. How often do people agree to triple their financial contribution in order to help those who have none? How often are parents so trusting to send their little ones into a distant and strange land? Clearly, the communal spirit of Sogakope is strong, and clearly, YCC has built a wonderful reputation over its six years of existence.

I told John that I would do my best through contacts and letters to find plane tickets cheaper than $1,200 for the five students who have no funding.

So, dear readers, if you have any bright ideas for how to do this (direct flights, preferably, for which British Airways is the only provider), please let me know! 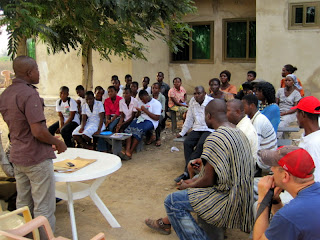 I couldn’t help but remember this: In early August of 2009, right before I was to leave on my year-long Around the World journey, I went with my Mother to her office to meet her coworkers.

“How do you feel about your daughter undertaking such a crazy adventure?” gasped one of my Mother’s friends.

“Ahhh, yes,” my sweet Mother sighed, “Let’s talk about it at lunch.”

And that’s how it is, isn’t it? It’s scary, confusing, insane, and sometimes wildly expensive, but if you love your child and want them to dance through those distant doors of opportunity, you must allow them to fly across those wide oceans and into the unknown. 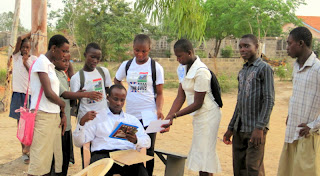 What love and admiration I have for those parents of children flying continents away: both the parents of Sogakope, and my own!

I will keep you posted on how this Britain-Ghana exchange progresses, and I welcome any ideas on how to improve or facilitate it.

A rooster is crowing now that it’s getting so late it’s almost early, and so I’m off to sleep. G’night!