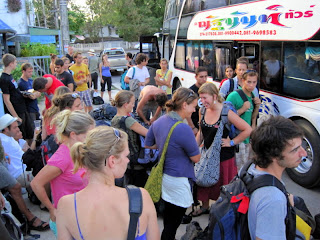 We had a bus breakdown en route to Bangkok from Ko Lanta, and not a single tourist had a mental breakdown! I’m so proud of our kind.

Indication number one that something was wrong with our bus: the temperature inside was worse than a sauna.

I’m prone to exaggeration, so my brother is likely shaking his head right now, scoffing: “Yea right! It was probably seventy degrees Fahrenheit in there, you wimp!” But I promise you, I have never been in a hotter space in my life. 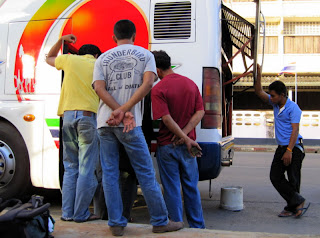 This is how hot it was: just sitting there, we each beaded up with sticky wet sweat after thirty seconds. Then, all the sweat started dripping down our faces and backs and fronts until each of our t-shirts and shorts became dripping wet.

Men with chest hair had swirly patterns of sweat on their yellow “Beer Chang” tank tops, and tall Swedish women had waterfalls dripping off their delicate golden arm hair. And it all smelled like feet.

Indication number two that our bus was lame: gas fumes began pouring into our nostrils. Danger! 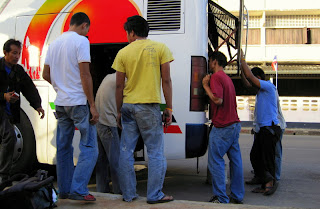 For thirty minutes we drove on like this, protesting more and more loudly. At last, the bus growled to a halt into a small road off the highway. Thank heaven!

We tumbled down the stairs and onto the pavement, and the eighty degree weather outside felt like cool, refreshing euphoria!

Then the “repairs” began. For the next hour and half, different Thai men arrived on motorcycles, opened a different part of the engine compartment, and stared inside. 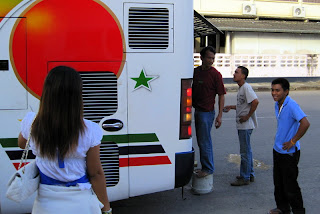 Sometimes someone would poke a finger in, emerging with coated black hands. Sometimes five people at once would peer into the metal innards, each with a hand on his hip in a different quizzical manner.

The seventy tourists stranded on the sidewalk stayed chipper. People began ordering drinks and food from the small store nearby, and then sprawled on the gravel and struck up conversations. Laughter and jokes rang through the air as the sun began to set, and the bus stayed broken. 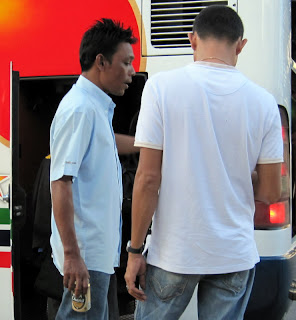 “Oh mon Dieu–” said my travel buddy, Guillaume, looking up suddenly from the trashy Thai romance novel I was forcing him to read aloud to me, “Are the bus mechanics–“

Sure enough, the lead mechanic was now leaning right into the gasoline-coated engine, a fiery lit cigarette dangling from his lips.

Two hours later, the mechanics gave us the verdict: “No fix. New bus.”

Half an hour later, we were aboard an icy-AC-ed new bus, and the engine roared to life. 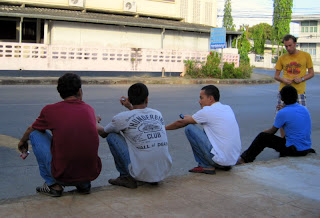 And then the music videos started.

What do sixty-nine Western tourists and one Thai woman riding a twenty hour bus to Bangkok want to watch? Why, of course they want to hear REALLY loud Thai techno and watch women in mini-skirts lying on top of glossy new trucks! They especially like close-ups of wheel rims. 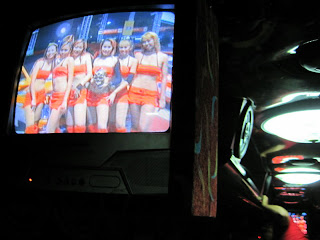 After thirty minutes of holding my ears in literal pain, I finally trudged down to the driver cabin and got him to turn the volume down to sanity level. I got a little applause when I came back upstairs!

Two hours into the drive, the videos flipped off and the movie began: “Casino Royale”! Hooray! The most gorgeous movie EVER.

The one thing was, when the characters first opened their mouths, it turned out the film was… dubbed in Thai. Really loud Thai. And Guillaume and I were right under the tinny speaker. 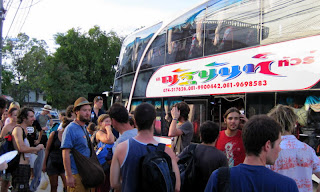 An English woman took driver-negotiating duty this time, asking the chap to re-start the DVD in English, if he wouldn’t mind. The screen flickered and suddenly we were on Scene 26: the poker game… in Thai. Ok, no. That was not helpful.

A Dutch woman went downstairs next.

Two minutes later the screen flickered and the movie started again. The previews were in English! This was hopeful! 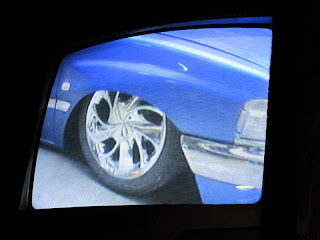 The first scene began, where James faces off with a baddie in Prague. The baddie opened his mouth and… Thai again! Everyone on the bus burst into uproarious laughter. A German man went downstairs this time.

He came back upstairs: “He say he only have it in Thai or Spanish,” he reported. We voted, and finally the movie came back on: in mute.

About this time we heard a scream of horror and turned to see that the air conditioning had dumped its entire icy water contents on the golden hair of a Swedish tourist! The girl just smiled, dried her sopping head with a blanket, and stuffed a sarong into the evil AC. That’s what I call a positive attitude! 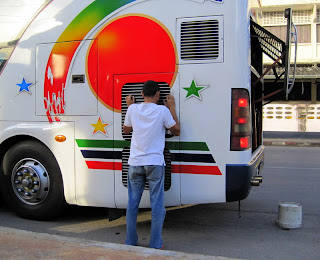 Around midnight we pulled into a roadside restaurant. “Last time we stop!” hollered a driver. “Eat and bathroom now!” We did, and got back on the bus.

At two am we pulled into a different roadside restaurant. “Last time we stop!” the driver hollered again. “Eat and bathroom!”

We looked at each other quizzically. “But didn’t he say…?” Ah well. Food and bathrooms are always appreciated, and we dove in. I re-affirmed my dislike of squat toilets in the process.

Back on the bus! 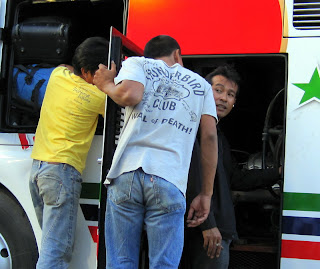 “You sleep in weird ways,” Guillaume said around five am, pointing to my pretzel shape and my foot near my ear. “Grumble,” I grumbled, exhausted.

At seven am we pulled into Bangkok. And here I am now in Lub-d, the beloved hostel I stayed in back in August, exhaustedly trying not to pass out in the lobby while I await the readiness of my dorm bed.

I can’t wait to reunite with my August friends who are here now also! It will be fascinating to reflect on how much we’ve seen and changed in the past four months of travel. And note: yesterday marked my last 20-plus-hour bus ride in Southeast Asia (of MANY) for this Around the World trip! In five days I fly to Europe. Crazy!

Previous Post: « Hilarity in my Room: The Frog
Next Post: Geographically Un-Chained: Could YOU Work on the Beach? »