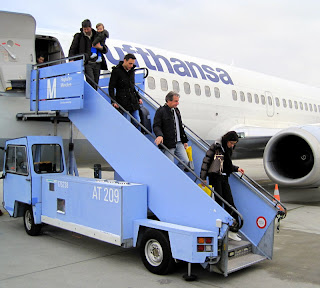 Our plane had been circling around and around Frankfurt, Germany for an hour when the captain’s sing-song German came on the loudspeaker.

“Nice!” I smiled to myself, gazing at the bruised purple snow clouds below us that had delayed our arrival so far, “I should still be able to catch my 10:30 flight to Accra if I run!”

The captain cleared his throat and the English translation began. “Unfortunately,” he said sheepishly (uh oh), “We are not going to Frankfurt.” Everyone on the plane who could speak English gasped. The Italian speakers went on snoozing in ignorant bliss. “There ees just too much snow over there. Too much dangerous weather. We have made a gambled decision and we are taking you all now to Munich.”

I thumped my head against the seat in front, remembering there was no direct flight from Munich to Accra. The captain continued: “There will be staff on the ground to assist you with your connecting flights. Thank you for your patience. We will be landing in forty-five minutes.”

The announcement began again in translation, and the Italians burst into bitter laughter and screams.

The one Russian man on the plane remained jolly and clueless. As the plane began to land, he asked the stewardess: “Frankfurt?”

The landing was smooth, and we spilled out of a wheeled staircase and onto the frigid tarmac. A long snaking shuttle bus screeched up and all one hundred of us piled on. Once we were deposited at Terminal Two, we ran out into the lobby to search the promised hoards of helpful Lufthansa staff… but the lobby was empty. We milled around in confusion.

Some of us began a pilgrimage up the escalator and down the overly shiny airport hallway, and it was then we saw it: the three hundred-person line for the Lufthansa Service desk.

For the next four and a half hours, we waited in that line. 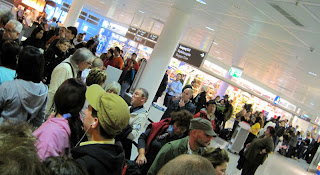 “I’m going to punch someone in the face,” growled the American boy next to me, pulling his baseball cap lower over his face. “You woke up at four in the morning to catch our flight, too, didn’t you?”

“Yup,” I said, yawning. “And the stupid thing is that I spent most of Christmas Eve changing my plane tickets from another airline onto this one because I thought it would be better.”

“Ugh,” the boy groaned, and curled his hand into a fist.

“Don’t punch anyone,” I said, “I’m sure they’re working as hard as they can.”

But… um… that may not have been the case. Let’s just say that my faith in supposed “German Efficiency” is uber-shaken. 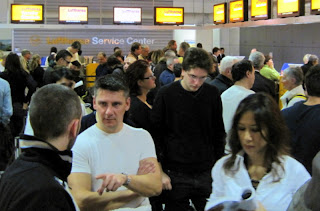 Bless their hearts, after hour one, the British-Singaporean couple behind me let me use their cell phone to call Ghana and let my contact, John, know that he had traveled all the way to Accra to pick me up for nothing, since I likely wouldn’t arrive for another twenty-four hours, minimum. John was kind and understanding.

The rugged British man of the couple was named Henry, and the gorgeously coiffed woman was Ming. They were both going to Accra, too, for a wedding. They were fun and friendly, and did wonders to keep the sanity in our general vicinity.

At one point, Henry wrapped his arms around Ming and whispered something in her ear. He put his hand on her belly and I heard: “And if it’s a boy, should we call him ‘Munich Airport’?”

Smiling about that exchange carried me through the next half hour. Pointing to the line stretching miles back and declaring, “At least we’re not back there!” carried us through the next one. Listening to Ming and Henry practice their Italian through melodramatic skits, coached by the Armani-clad Italian man behind us, burned the next thirty minutes. 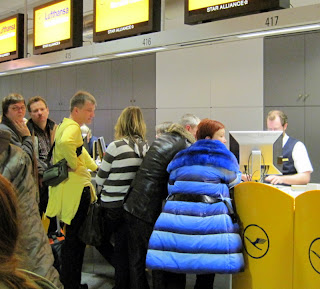 We bought nuts and chips and ate them, and gawked at the amazing electric blue poof coat of another passenger, pictured to the left. Lufthansa was kind enough to provide bottled water. Then the news came out that Frankfurt Airport had re-opened minutes after we diverted, meaning that we could have landed there and saved this whole ridiculous episode.

“This line is so calm!” I exclaimed. “In America, there would be screaming and crying and riots!”

“At least one gunshot,” Ming agreed. “It doesn’t do any good to get angry or worked up, though, does it.”

But by hour four, however, rock-solid Henry began to lose it. He jumped the line barrier when we overheard a man who’d reached the counter asking about Accra. Henry interrupted: “Mate, three of us back here are in the same situation. Could you tell us our options to get to Ghana so we can think about it before we reach the desk?”

“I am sorry, sir,” said the prim clerk with German sharpness, “but that ees impossible.”

“But wouldn’t it make more sense to sort these hundreds of people by destination, and take it from there?” asked Henry. 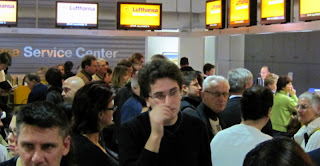 “I am sorry, sir,” repeated the clerk, “that ees impossible. Go back to the line.”

“Maybe it’s impossible for YOU,” spat Henry, stomping back to us. He and Ming then proceeded to compare the clerk’s head to various male body parts, then pretend to throw bottles of water at the desk. It was wrong, I know, but giggling about that while simultaneously restraining the throwing arms before they could do damage carried me through the last half hour.

At last! To the clerk!

She tapped at her computer. “Accra will be difficult,” she murmured after ten minutes of typing. “But then again, I am in a different computer system than the others. Maybe I will ask my colleagues if they can access any other flights through their systems.” 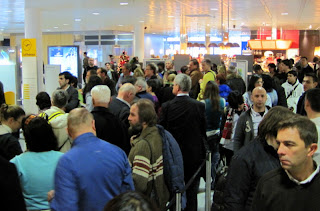 “WHAT?” I gasped, “You all don’t have a coordinated computer system?!”

The woman disappeared for another ten minutes to another clerk’s computer, and then a back room. I began swearing to myself about inefficiency and ridiculousness while hyperventilating and shredding my water bottle label.

Meanwhile, Henry and Ming’s turn came, and which clerk should they get, but the one Henry had yelled at! The clerk took one look at them, then slammed a “Closed” sign on his desk and walked away. The couple had to wait another ten minutes for the next agent.

“All right,” my clerk said said, after having returned two different times to ask questions, such as my nationality. “You will sleep in Munich tonight, and you will fly to London tomorrow, where you will have to retrieve and re-check your bags. You will have a four and half hour layover in Heathrow, then you will arrive in Accra tomorrow night.” 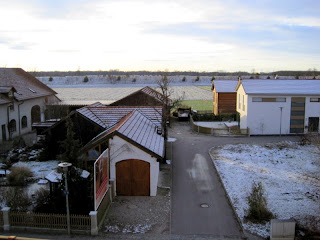 “And we can’t give you back your bags tonight because that is too confusing,” she added.

“I have no problem wearing the same clothes for forty-eight hours,” I growled, glancing at the massive line behind me.
Oh,” she exclaimed, “or I could have your bags sent to Accra so you don’t have to re-check them in London. Would you like that?”

I glowered and then started to cry out of exhaustion. “Whatever you think is best.”

For the next fifteen minutes, the clerk called London, sent them a “Telex,” whatever that is, took my passport and gave it back, and then asked for it again– three times, and then had a sustained conversation with her colleague.

“This is really a mess today, isn’t it?” she marveled as she handed me my hotel and food vouchers.

“Yes it is,” I agreed with passion. 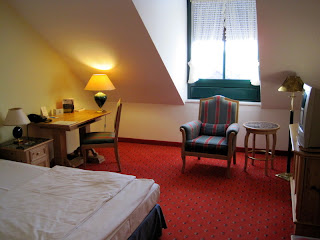 The positives: Lufthansa paid for our lunch, dinner, and tomorrow’s breakfast, plus a taxi, plus this room in a Sheraton, pictured to the left. When I finally got to my bed at four thirty pm (I had left my hotel in Milan at five in the morning), I threw myself on the mattress and passed out. I didn’t realize how exhausted I was!

Another positive: if I were back in Boston, my Winter Vacation would be ending now, and re-entry to work is never fun. Delays or not, this world voyage is a dream.

Tomorrow, attempt two: Accra. I can’t wait! The final two “Top of 2009” lists with article links are pre-programmed for January fifth and sixth while I get settled in Ghana. Get psyched for Love, Laughter, and Epiphanies!

I just found this blog, so I'm exploring and found this old post. Road warriors love sharing messed up travel experiences, so here's a link to my blog post about mine:

Oyyy! Chicago airport can be a vortex. So glad you finally got home!

Chris said... Argh the ups and downs of travel eh

Louisa said... What a nightmare. At least you're going to Ghana for a good long time, you know? If you're going somewhere for a week's vacation and you waste two days getting there, that is even worse!

Kmo said... Ridiculous! But at least it's over. And I have to say: that electric blue coat is AWESOME.