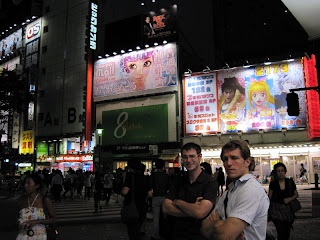 I am typing to you now from the former keyboard of a famous author. He is my semi-mentor, whether he wants to be or not, because he travels around the globe (from Iraq to Cuba) reclusively banging out page after page of award-winning text, then living the alternating weeks with passionate abandon. For weeks on end, he disappears from earth to write, then explodes back into humanity.

Before he jetted to Japan (to help “set” his most recent book), a friend introduced us, and we became scandal penpals: 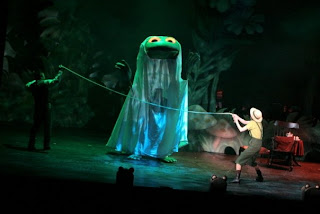 each trying to out-shock the other. Ultimately, the author determined that his hands were too manly big for his 10-inch computer, and asked if I’d buy it off him in Tokyo. The deal was set.

Day two of Tokyo, Mike and I walked out of a charming Japanese musical adaptation of “Frog and Toad are Friends” (I joke you not—see the picture proof!) and rendezvoused with the author outside the dog sculpture in Shibuya Station that is the feature of an upcoming Richard Gere movie. On dogs! The author’s piercing blue eyes and flop of blond hair were just as I remembered. Dashing, man, dashing. To a sushi restaurant we went! 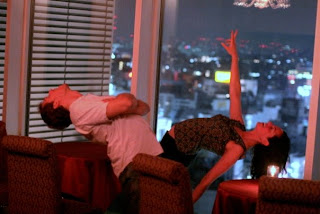 “30 minutes into our conversation,” the author recounted, munching raw tuna, “that gorgeous Japanese woman said: ‘My boyfriend’s away for the day. Want to go on a date with me?’ Naturally, I agreed.”
“I have been in Japan 7 years!” screamed Mike. “WHY DOES THIS STUFF NOT HAPPEN TO ME????” Jealous or not, we all thoroughly enjoyed the details of the author’s exploits. 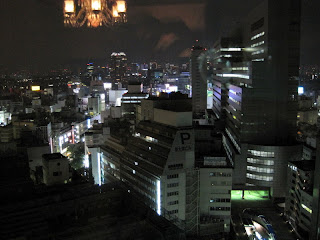 Alas, then came the giant fight about the price of the computer (in which I likely reached a new low of obnoxious behavior), and we shall not speak more of that. Regardless, to smooth the tension, the author generously took us to a rooftop restaurant which glistens high atop Tokyo. You like the resulting pics? I do.
“I think I should take this gig in The Congo and write about the endangered Bonobo monkeys,” the author sighed, but life is just so GOOD here in Tokyo! But Bonobos ARE important,” he added. “Do you know that those awesome monkeys settle all arguments with love and hugs? Not war like other apes, ever. Just love.” We were all very happy to hear it.

Mike and the author hit it off ridiculously well. “Oh– you’ve been to North Korea?! Can you help me get in??” “Ah! How WAS Kosovo?” “Afghanistan is next on my list.” “Me too! After Nepal and India, though.” 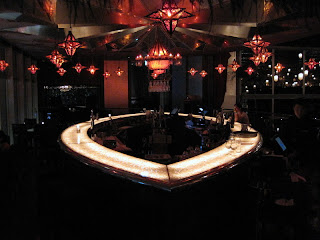 But then it got dark. “When you stop to think about the depravity of the human race… the awful things we do… the way our whole existence has no point…” the author murmured, staring into his dark red wine. He had just finished his second book at two am the previous night and had a tendency towards murky depression when not working.

I like dark in my literature, but not in my worldview. “You’ve got to stop writing only depressing stuff!” I yelled. “You’ll go crazy!”

“I’m the sanest one in my family,” the author protested for the tenth time that night. 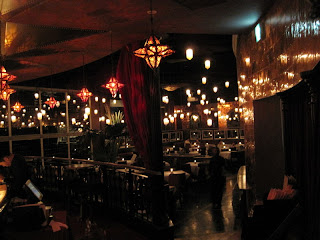 But he began to relent. “Ok, ok, I’ll write happy stuff soon. I will. But… what the heck IS a happy topic? What’s happy that’s not dumb?”

“Love,” I replied. “How about this: Two interlocking novels in one. The first about a modern-day Cassanova (*cough, cough, meaningful look towards his rakish smile*), and the second about the endangered Bonobo monkeys! The two stories can tie together in the end, with a fiesta of hugs and kisses!”

“I like it…” he mused… “A modern day Don Quijote, searching the earth for love and meaning… And also monkeys.”

At this point Mike’s girlfriend called to ask where the heck we were.

“By the way,” said the author, “I finally found a way to infiltrate deep into the finance industry, to research my next book.”

“I’ve been dating the finance women.”