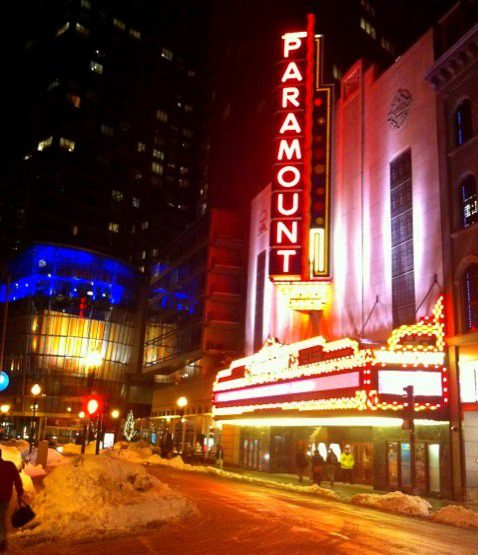 Don’t you feel glamorous just looking at it?

What is the History of the Paramount, Boston?

This quote from a March 3, 2010 Boston Globe article by Geoff Edgers sums up what you’re about to read:

Wait… there was a ramshackle X-Rated movie house in the middle of downtown Boston just a generation ago?!

Yes, that is correct. Remember two articles ago how we realized that our “Developed Country” has still done a ton of “Developing” recently, and is continuing to evolve as we speak? Well here’s another example: the glowing lights that I now declare “The Sexiest Sign in Boston”… the 7,000-bulb marquee for the Paramount Theater!

I walk by this tower of light several times a week, since it’s downtown on Washington Street by the Chinatown stop on the Orange Line, and thus it nuzzles near a bevy of stores and sights. As I pass, I always pause inadvertently to ogle. The term that comes to mind while I ogle this sign is: “Glamor.” Or, if you want to be fancy and British, “Glamour.” 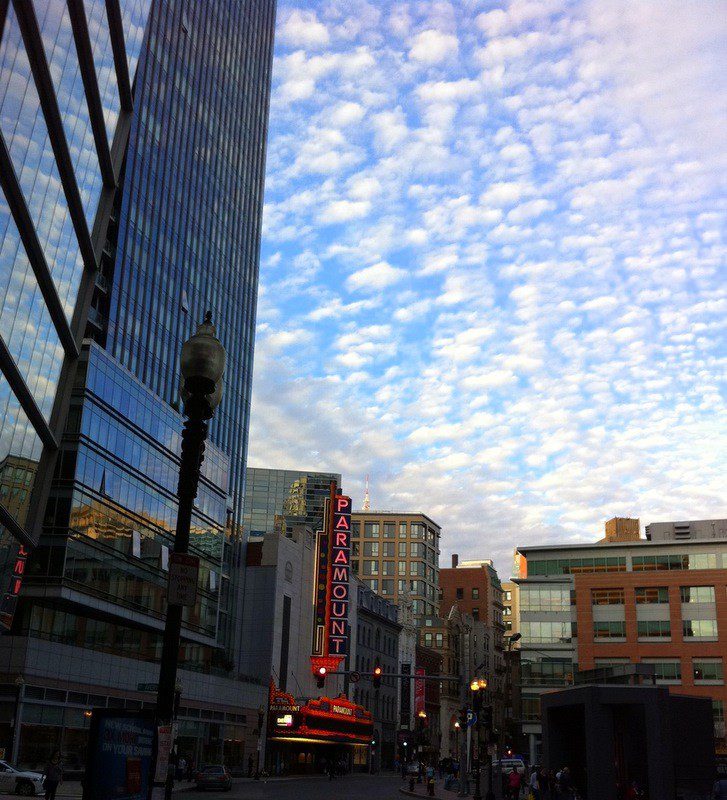 In short, as the undulating red and gold and blue lights glitter through my eyes, I become convinced that I am actually wearing a flowing mink coat, have my hair in a voluptuously curled up-do, and am clutching a jeweled, gold-embroidered purse (full of diamonds of course).

Such is the power of a pretty sign on the mind of this gal.

But what of this sign’s history? What of these rumors of a tawdry and decayed past?

A little sleuthing yields the answer, and it ain’t pretty.

The Paramount was opened in 1932 as a 1,700-seat theater that, according to Wikipedia, was one of the first movie houses in Boston to play talking motion pictures.

Hear that, kids? Just seventy-nine years ago, it was crazy new technology to have a movie in which actors actually spoke aloud! 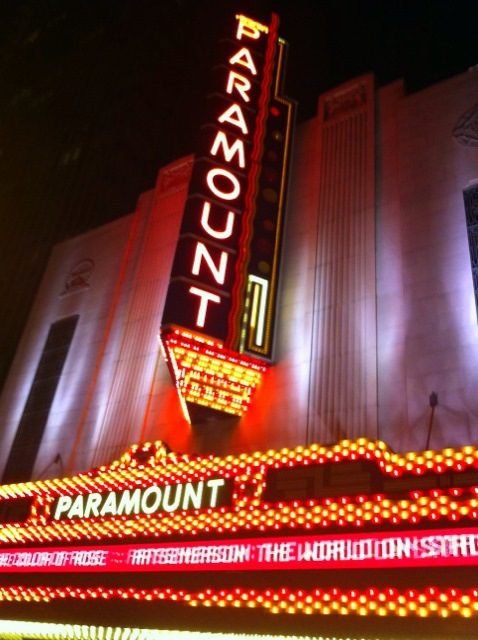 The sign sings: “Our cities are alive again, baby!”

Did You Know About this Decay?

But as the twentieth century wore on, our cities here in America began to decay. This is an element of our national history that broke my heart when I learned it in college. Basically, by the 1950s, more people in the U.S. were living in suburbs than in cities for the first time in our history.

This was due to a combination of increased car ownership, a shift away from industrial jobs towards service ones, racial tensions (“white flight”), and more… but the end result was that our city centers began dying. The government started investing in things like highways out of the city, rather than in maintaining and improving our downtown hearts, and so those hearts became deathly sick.

And thus the Paramount Theater fell into squalor. And when I say squalor, I’m not kidding. Here’s a direct quote from Edgers’s Globe article about the Paramount:

“It may be hard, seeing the Paramount Theatre today, to understand just how dramatic a transformation has taken place.

Ross Cameron remembers. Five years ago, the project architect walked through the damp, dirty space to see what had to be done. He found bird skeletons and mold. He could see through a back wall into the alley behind the theater. And he could hear rats splashing around in the orchestra pit. At one point, Cameron entered the projection room. With no electricity, he had to follow the beam of his flashlight. 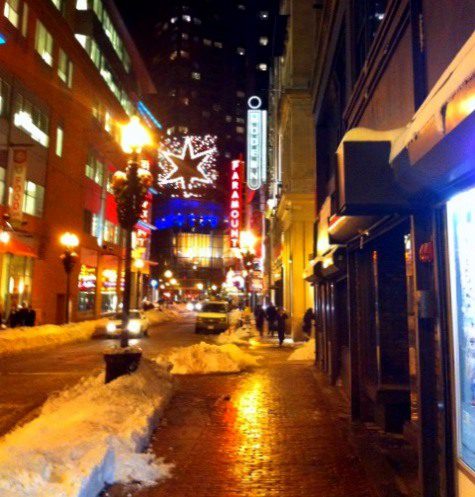 The heart of Boston is more and more vibrant each day!

The Paramount Theatre Sign is Renewed, as is Boston!

“I caught this broken mirror, and next to it on the door, somebody had painted, in red, a skull and the word ‘REDRUM,’’’ said Cameron. “Ever seen ‘The Shining?’ I had to leave for the day.’’”

How happy I am to be living right in the heart of an American city, in an era when these precious city hearts are beating more and more strongly, thumping: “We are not dead! Keep nourishing us, and watch us flourish!”

What a wonderful story. I love when old theaters like this are revitlaized. They are true gems.

The Paramount sign is sexy and it knows it!

I love it there.

Shouldn't "R-rated" be the term for inappropriate movies instead of "X-rated"? That theatre is run down when I came to the US and I remember asking my mother questions on the theatre's history. The theatre is like, invisible without the shiny lights luring customers inside the door. Back Bay is the complete opposite of the "dying cities" back then.