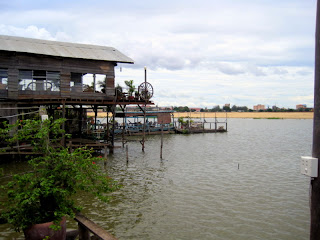 There is a toxic lake at the heart of Phnom Penh. If you swim in it, your flesh may sizzle, or perhaps the effects will cancerously explode in a few years. Regardless, though naked children slide through the brownest rivers of the Cambodian side roads, there is not a soul amid the silvery waves of Boeung Kak Lake.

Naturally, this is where I spent my first night in Phnom Penh.

All six hours of the bus journey from Siem Reap were in Spanish, as I fell in with a fabulous Colombian crew across the cramped aisle. When we got off the bus I decided to let Camilo do all the tuk-tuk haggling, as his skills were quality after a month as a photographer in rural Vietnam and Cambodia. His thick Spanish-Australian accent battled the choppy English of the Cambodian driver until we had a ride to the lake for a dollar. 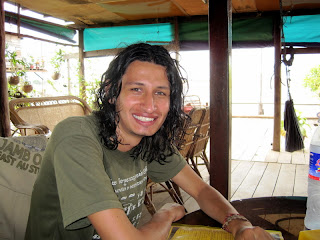 Warnings of this seedy “backpackers-who-no one-wants” area abound in the guidebook, but so, too, do reports of the strikingly beautiful view and vibe, as well as the great prices. Sure enough, the moment our feet hit the rocky pavement, we were offered opium. (Opium! Do people even DO opium any more? Rest assured, we fully declined.) Also, sure enough, once we walked through the pool-table-filled narrow alleyway past the stray animals and grubby children, the gorgeously rickety veranda spread its arms wide to show: the lake!

Floorboards creaked and almost broke under the weight of us plus the skittering geckos. But potted plants, hammocks, soft chairs, and inviting tables lay all around, and as the sun set, the toxic chemicals of Boeung Kak mixed with the air and gave an otherworldly glow to the whole scene. Gorgeous!

We took our $2 room which hovered on stilts over the water (twinkling through the giant cracks in the wood). My bed had fleas in it; Camilo’s had ants. I requested two extra sheets and a towel and slept on those. We were offered drugs again and declined. 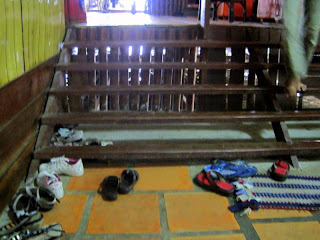 Over hot chicken amok and rice, we watched the eerily empty piers on either side creak with the forlorn dance steps of the Cambodian workers. It is low, LOW tourist season in Cambodia. It is so low that tons of places are utter ghost towns, with the Cambodian staff idly playing games, texting on cell phones, and throwing blue-lit nightclub parties which they pray will bring in the three tourists. On either side of us, music thumped in an empty echo: plaintive wails of Cambodian music on one side, reggae on the other, yet both giant over-water dance stages had no one on them but two small children and a drug dealer.

I awoke with no bedbug bites! Yes! A miracle.

Camilo hopped a moped to the airport to fly back to English lessons in Melbourne. I told him as he left that he had to follow his true love who moved to Africa. One must always follow true love!

By now I had contact information for my Aunt’s awesome co-worker, whose house I walked to. On the way to the riverfront cafes, we dodged screeching mopeds on this city with no sidewalks. Mike and I had a wonderful, informative chat, and I bow down to him for surviving Phnom Penh for a whole year. It is an intense, intense city. 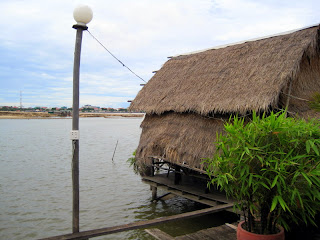 I was supposed to go to the Killing Fields to see the bones and bashed-in skulls of the hundreds of thousands of Cambodians massacred under Pol Pot, but I felt so nauseous just thinking about it that the sun set before I could even make it nearby. I stalked the STA Travel tour group my friend Adie is on and moved my backpack out of the insect-infested lake and into the sweet residential area in which the group was staying.

Adie, who is the nicest person ever, had a love fest with the owner of the Cambodian sports bar which went something like this: Adie ordered a ton of food the day before. The owner was so happy he refused to take Adie’s money the next day. Adie was so happy he went upstairs and got a brand new England soccer shirt and gave it to the owner. The owner’s was so happy he pulled off his own shirt and put on the new one, then came out with a giant plate of green mangoes and chili sauce for Adie. Adie was so happy he ordered a ton more food. No tuk-tuks were around by midnight (which is the craziest moment I’ve had so far in Cambodia, given that every other second of every other day the grown men are literally fist-fighting to get you into their vehicle), so the owner revved up his own red mo-ped and took me back to my hostel himself, protecting me from weird street-lurkers until I was safe upstairs. So sweet! Adie ordered a ton more food. Thinking of both their beaming smiles in this friendship one-up-manship makes me grin all over again. 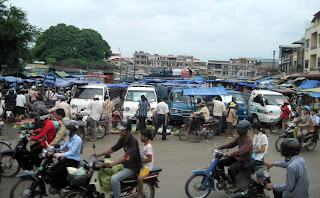 At the crack of dawn the next morning I had the most amazing vegetable noodle breakfast soup in history, then hopped the six hour bus to Sihanoukville in order to, 1) Get the heck out of crazy Phnom Penh, 2) Continue hilariously and somewhat loserishly stalking the STA Travel group (which was in a much plusher bus fifteen minutes ahead of me, and, 3) Hit the beach!

I found out on that bus ride that the toxic Phnom Penh lake is being slowly filled in and erased. This is both good (given that it is, you know, toxic), and sad (given that all the lakeside dwellings, including the neat hotel in which we stayed, will be razed and the dwellers displaced).

In some ways, this toxic lake at the center of the capital city reflects the horrific recent history of Cambodia. My friend showed me photos of the Killing Fields; teeth, arm bones, and tattered clothes of the massacre victims are still strewn along the path the tourists tread each day. How can a people move on from this toxic history? Can it really be “filled in” and converted into an educational memorial for tourists and Cambodians alike? One has to wonder whether a filled-in toxic lake sometimes just creates toxic land.

Wow! Imagine you didn't know that it was toxic and you swam in it! Thank god you didnt! But isn't that crazy how you were offered drugs and people actually thought you would say yes! Gladly you didn't and you're still my teacher

I must have been frightening to go or even think of the killing fields, but even more frightening is a toxic lake that could give you cancer. I hope I never accidentally fall in the toxic lake.

Wow! I never knew that in this whole of the world, they actually have a toxic lake! Now, I wonder, what is it that makes it toxic? Is it because someone put some sort of acid in the lake or is it the fact that the water is just so hot that it got intoxicated by the sun! I would wonder for all the people that have swam in that lake! What was the outcome of all those people? Very interesting article!

Thanks! My guess is it was caused by some sort of human-made pollution.

Hi Ms. Marshall! This article was really interesting but one question that I have is that if some one went into the lake for just a little bit (a split second), how badly would they be hurt?

I'm really not sure, but it's freaky just to think about.

I really enjoyed this article. I had heard so much about this lake, but I never really stopped to research it. This gave a very unique, and honest opinion of your travels in Cambodia. This is very helpful to know, and I had no idea that there was so much history both good and bad, takes place here in a country I hadn't exactly heard of until a few months ago. I thought it was very Interesting, and I had no Idea that this part of the world was so engaging. Thanks!