Part of the reason I stayed so long in Bangkok (besides the wonderful people) was I was terrified to cross the infamous Thailand-Cambodia border at Poipet. 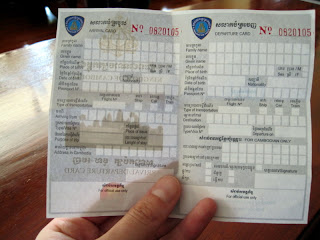 I was right to be scared.

The man in the suit grew exasperated. “This IS the border, sir. Here– here is my credential.” He showed us a badge and a certificate. “Please just fill out these forms, and you can get your Cambodian visa.” He again fluttered the official-looking documents at us.

Flo and I didn’t know who to believe. The whole five hour bus ride from Bangkok to Aranyaprathet, the two Austrian brothers and I had been comparing the scary research we had done regarding border con artists. I looked at the document. It was stamped with a color seal of the Kingdom of Cambodia, and looked like every other official document I’ve filled out, with its careful blue and white grid. Twelve other men in suits watched us from across the office.

“This is NOT the border,” said Thomas again. “You are trying to get money from us. You don’t work for the government.”

There was a bustle as the men in suits talked loudly in Khymer and flipped open their cellphones to make calls. The three of us began to believe that maybe we were just being paranoid foreigners. Maybe we were being plain old rude. Ignorant. Flo sat down at the table and picked up a pen. It’s not a good idea to upset a government official. Had we just been reading too many horror stories?

Suddenly, the first man in the suit strode back. “Ok, you can go.” 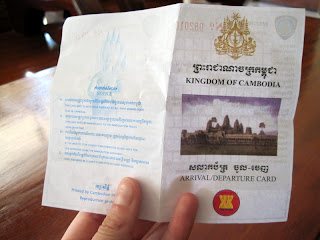 I was aghast. Just like the internet pages had warned, the whole thing– the official papers, the suits, the badges– had just been a scam.

We shakily climbed back in the tuk-tuk and glared at the long-haired woman driving. “The BORDER, please,” said Thomas. The motor started, and the woman said nothing.

“Consulate,” she said, two minutes later, stopping the vehicle. We looked up at the Consulate of Cambodia, and could see new men in suits descending the lawn towards us. “NO!” we said in unison, “THE BORDER. THE ACTUAL BORDER!” The driver stared at us from behind her giant dark glasses, immobile. The heat was sweltering and the three of us barely fit with our backpacks on the tiny, three-wheeled tuk-tuk.

Finally, we were moving down the highway again. I couldn’t believe our driver had tried to sell us to sham artists TWICE to earn her paltry commission from them– but we had been amply warned that this is how it goes. 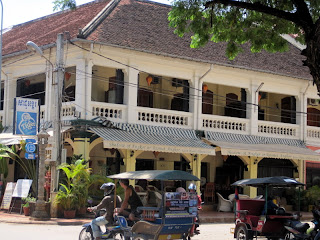 Ten minutes later, we began to see barbed wire, looming, fence-like buildings, and dozens of men in uniforms. We also saw streams of people on foot with coconut-stacked wheelbarrows and checkered head scarves walking purposefully towards the gaps in the barbed wire. We angrily paid the tuk-tuk driver her undeserved 80 Baht and walked to the sign marked “Foreigners”. We got our exit stamp from the real Thai official.

In the nether-world between the two countries, we entered the “Visa on Arrival” booth. The heat and dust were choking, and the lines of coconut wheelbarrow folks continued past us, now joined by dozens of tiny children who shrieked “Hallooo!” and tried to follow us. We filled out the ACTUAL visa application (which looked nothing like the fake one the scam artists had given us), and I walked to the official to pay. “900 Baht,” ($25) he said. I handed him two five hundreds. He looked at the money, then at my visa application. “Actually,” he said, “1000 Baht.” I started to argue, completely paranoid and rattled from our earlier encounter, but Thomas shushed me. “This man actually IS an official,” he whispered. “Just let it go. It’s three dollars more.”

We got on the free shuttle bus to the bus and taxi depot nearby. The bus from the depot to Siem Reap is cheap but takes five hours or more, and often sells you to guesthouses for commission. The taxi takes just two hours and, while the $48 price is exorbitant for Cambodia, most tourists pick it, as it’s a worthwhile cost when split among several people. 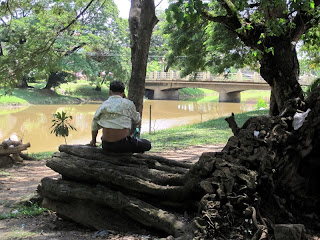 A tout led us through a throng of loudly talking men to the shabby taxi and we got in, expecting the driver to do the same. Instead, he dove into a ten-minute argument with the throng of men, all of them gesturing wildly. “It’s the tourist trade mafia,” whispered Thomas. “They are negotiating who gets what share of our money. Did you notice how there is no good public transport to Siem Reap, even though a quality bus would be easy enough to create? The tourist trade mafia keeps it that way so they can charge the crazy taxi fares.”

A third man came to our window. “You pay half now, half in Siem Reap,” he said. “We need to pay the police.” We looked over and suddenly saw a man in a police uniform silently writing on a pad, seemingly presiding over the argument. “Where’s our driver?” said Thomas. At last we spotted our diminutive chauffeur, engulfed in the waving arms and loud debate. “When our driver sits down, we’ll give you the money,” said Thomas. At last the driver came, the money changed hands, and the policeman issued the cab an official-looking certificate for the window. 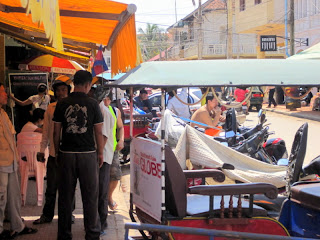 We were off! Electric green rice fields, pancake flat and laden with dully glinting brown pools… Cattle on the fields and also trotting along the road… Giant blue sky with swollen puffs of white clouds… Tiny towns with rickety shacks and wares sold on dusty platforms… “We’re in Cambodia!” I whispered, awe-struck.

Suddenly a rooster crowed, and we stopped short. The rooster turned out to be the driver’s cellphone. He answered and began yelling in Khymer. “He’s trying to sell us to guest houses for a commission,” Thomas whispered. Five minutes later, we were driving again, but throughout the two hours on the road, the rooster would crow again, the phone would ring, and the haggling would continue. Was he calling several guest houses? Tuk-tuk drivers? Touts? Just one and arguing a price? Who knows. 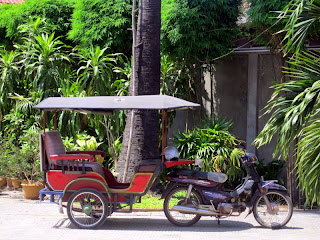 Sure enough, once in Siem Reap, we were greeted by another ten men in possibly-but-likely-not-official attire. An effeminate tout led us to a tuk-tuk, assuring us it would take us the the guesthouse of our desire at no extra cost. At this point, I had no idea who or what to believe, so I just shut down. “Lady!” he said to me, as the tuk-tuk swayed on the rutted road, “You look mad! You mad?” “No,” I replied with a smile, “I’m so glad to be here. I’m just tired!” Indeed, I had left my Bangkok hostel at 6am, and it was now five in the evening. All I’d eaten all day was a custard bun and a taro cake at Mo Chit bus station.

We bopped between guest houses (there was confusion with Thomas’s reservation), but when we finally walked into one, the tout from our tuk-tuk started yelling angrily at the man helping us with our bags. “What’s wrong?” asked Flo. “He’s angry at me because our guest house doesn’t pay touts commission,” said the man. “It’s the transportation mafia versus the guesthouse mafia!” whispered Thomas. We were in the middle of a catfight. 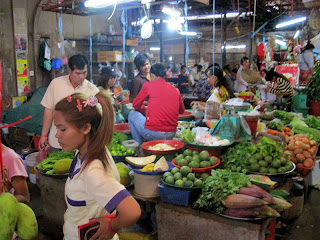 So now I’m in a totally weird all-window room on the fourth floor of this pretty house– and my bathroom is on the first floor. Fifty Baht says this is a former office turned into a guest room for extra cash.

And now to end with two positive notes. One: dinner was DELICIOUS and cost $2.75 for a HUGE plate of Khymer curry, rice, and drinks. Two: I just got an email from a friend of a friend explaining how much she loved working in Cambodia, and how great the people are. These two sweet things are reminders that a few rather rotten scam artists should not sour a tourist on the wonders of a deservedly famous country. Angkor Wat tomorrow!

Yeah, okay, I'm a little late to the party... But this article is great! Your whole blog is, Thank you for taking the time to inform the masses of anxious, aspiring travelers.

No time is too late! Thanks for your kind comment (made my day!) and happy travels!

Hi Lillie, Great post - thanks for reminding me of all the touts in Thailand. Been scammed a few times, I'll be ready for Cambodia! Keep up the great writing! Frank PS Another scam: http://bbqboy.net/falling-for-the-bangkok-gem-scam/

I'm not sure I would have made it through that first fake checkpoint without being out some money. It's always a fine line between standing up to really good con artists, and offending actual government officials who could prevent you from entering their country if you upset them. Glad you did your homework, and kudos to Thomas for sensing the elaborate hoax.

Happens to everyone doing that route, but I got pretty lucky. If you know it is coming and just remain firm -- things are fine. And I actually did take the bus to Siem Reap -- and shockingly -- with NO problems. LOL.