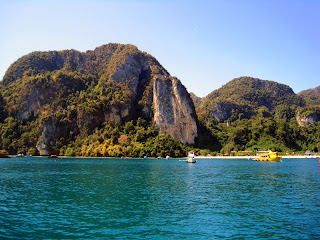 On December 26, 2004, two giant tsunami waves smashed into the tiny island of Ko Phi Phi from opposite sides, meeting in the middle and killing an estimated four thousand locals and tourists.

Five years later, there are now “Tsunami Evacuation Route” signs and a Tsunami Memorial. But the main thing you notice about the island is its exploding tourism: specifically of the drunk and stumbling type.

For some folks this is heaven, with a 7-Eleven on every corner and overpriced clothing stores spilling out onto the beach. But for others, it’s rather creepy… especially if you’re running a fever. 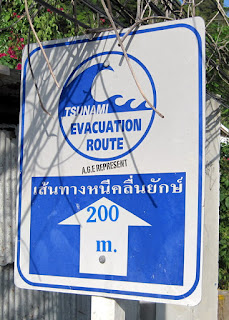 Around two in the afternoon, after thirty hours of buses and boats, I collapsed into what I thought was the dorm bed I had purchased. My new transportation buddy, Brian, and I had lugged our backpacks for about a mile through the town, realizing by the moment that it is now high season in Southern Thailand, and every room is now astronomically expensive, if not full. The hostel we found for 250 Baht ($7.50) was nice enough, though the sweltering heat was rolling over us from our flip flops to our sweat-drenched heads.

Suddenly two boys burst into the room. “WHAT ARE YOU DOING IN STACEY’S BED?” the larger one hollered to me.

“Huh?” I croaked, half asleep, “The manager just sold me this one and said it was open!” 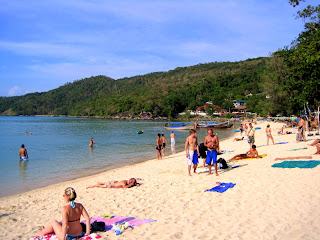 “Count the backpacks in here, man,” said the boy. “One, two, three, four… FIVE. I see four beds in here, and five backpacks.”

The manager scampered in and worked himself into a tizzy counting the backpacks and beds over and over and consulting his charts.

“Listen,” I said hopefully, “If you want to sell me a single room at a discount price for this confusion, I’d be more than happy to take it!” 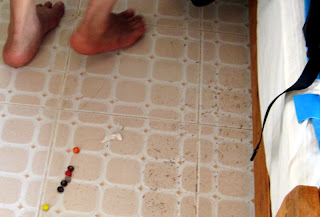 The manager laughed uproariously. “No, no,” he said. “Easy to fix. Just bring in other mattress!”

And so, like that, I was thrown from the top bunk, and three employees pushed the two wooden bed frames apart to make just enough room for a mattress.

Oh what a sight greeted us from the exposed space between the beds! It seems that several months ago, some sloppy tourist had left a smattering of M&M’s beneath his bunk. 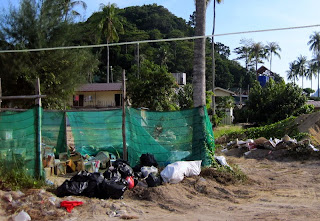 Now, hoards of tiny ants seethed around the candies, bringing chunks of sweet sugar to their kinsmen and chattering derisively to the giant red ants and cockroaches along the walls. “Haha! We got here first!” (Look closely at the photo, left…)

“No problem, no problem!” yelled the manager, grabbing a palm broom and whisking the ants and candies out the door in a graceful arc. “See, no problem! Clean!” 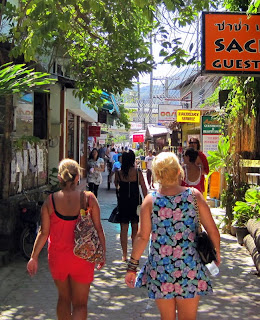 Three seconds later, two lackeys burst into the door with a moth eaten mattress, plopping it with a cloud of dust onto the floor. They tossed some sheets on top and declared, “Easy! Five beds!”

At this point my fever was setting in, and the world was an achy haze of torment. The girl whose bed I’d almost stolen entered and declared, “Well I’m certainly not sleeping in that middle bed. The top bunk was mine, and I’m sticking with it.” I gazed morosely at the mattress, imagining I could see earwigs squiggling just under the sheets.

About half an hour passed, all of us just staring at the mattress on the floor. At last, oh bless his soul, Brian sighed, “Ok Lillie, I’ll take that middle bed. I’ll be a gentleman for once.” 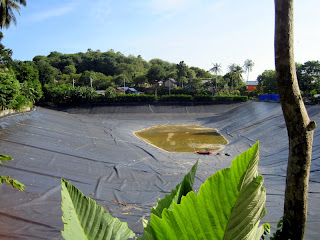 “Oh praise you, praise you!!!” I cried out with true gratitude. I really, really appreciated it. His dinner was on me.

That evening, we went for a walk and for food, squeezing through the estimated 10,000 (!!!!) tourists on the narrow streets. It was nuts.

Ko Phi Phi is known for being one of the most beautiful islands in the world, with both a James Bond movie and DiCaprio’s “The Beach” being filmed here. Right now, however, it looks like it’s gasping for air beneath wave after wave of insane Westerners. 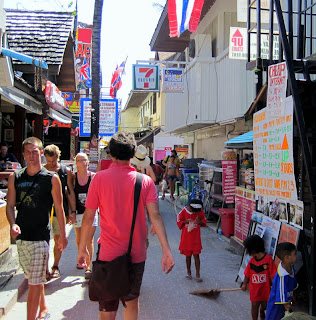 We walked past the “reservoir” of “fresh” water for the island. Look at the photo to the upper right. Just how many more tourist showers do you think that puddle can support? Signs all over our hostel declare: “Water to be turned on only 9am-11am and 3pm-5pm.”

As we walked, we also passed piles and piles of trash amid the new construction. A putrid gray stream stinks its way under path we take back to our dorm.

The beach remains, however, gorgeous. And the sun beats down with the force of elephant doing salsa. Sometimes I can’t tell what’s my fever and what’s just the heat. 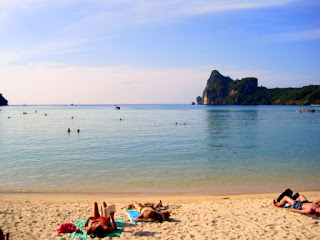 Tomorrow, Brian and I are escaping via ferry. Brian will head to Krabi, and I’ll try out the reputedly saner Ko Lanta.

I feel like a major brat giving barely two days to one of the jewels of the Andaman Sea, but there are times when your soul just knows you’re at the wrong place at the wrong time. Oh friends and fellow travelers, you tried so hard to warn me!

“Yo man, you gotta stay at LEAST four days,” slurred one of our roommates. “I got this weird alligator tattoo on my foot the other day, and I don’t even remember getting it done!” 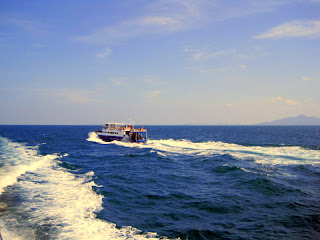 “That’s a Lacoste brand alligator,” chuckled another tourist. “You must really like your polo shirts.”

“Damn,” said our roommate. “I guess someone played a joke on me when I was drunk.”

Our boat leaves at eleven.

We took a boat trip from Krabi around the islands and were totally shocked at how crowded everywhere was, we dept telling the people on the boat that we wanted somewhere quiet to swim, but they took us on the normal tourist trail. The pollution from the boats was dreadful, every swim stop was quite frankly dangerous as there were too many boats and too many party tourists (they call themselves travellers and backpackers but they were no different to those on packages to Benidorm) just thought they were cooler (they weren't). As luck would have it our boat broke down on the way back and we were stranded for 2 hours in a bay of an island with no one else there. Bliss.I am very reluctant to return to Thailand. Underwhelmed.

Luckily, Thailand is extremely varied and there are many better places to visit!

Glad to have run across this post Lillie, you've confirmed everything I wrote here: http://bbqboy.net/phi-phi-thailand/ And I don't want to sound like a snob but you hit the jackpot describing the new wave of tourists in Phi Phi - package tour tourists on cheap charter flights from the UK or Scandinavian countries. Another blogger wrote the other day that "OMG, Phi Phi is so gorgeous" and I couldn't hold my tongue. If only others had gone there 10 years ago, it really was one of the most spectacular places on earth. Frank (bbqboy)

I hosted a guy weeks ago, who has been travelling the world for 3 years, he had the same view of Ko phi phi, but somehow i wanna see it, the beach the madness and all. I wanna be put of by it on site.

Shawn said... Way to take one for the team, Brian! Good on ya.

So Ko Phi Phi sounds kind of ridiculous. Even though I do love a good 7-eleven. The lacoste poster boy sounds exactly like the sort of backpacker I try to avoid - that whole genre of perpetual spring break backpackers.

Neil. K. Sheridan said... Urgh, that's the kind of story that puts me off visiting Thailand!

I beg of you do NOT be put off Thailand! This country is absolutely AMAZING to travel, live, and study in. My particular experience in Phi Phi was just one tiny article in nearly fifty glowing reports on this blog of other great Thai places! Today I'm posting one more crazy Phi Phi story, and then after that the blog will feature all good things about how great Ko Lanta (my current location) is. Keep reading and keep your love for Thailand!