To the Lighthouse! (on Ko Lanta) 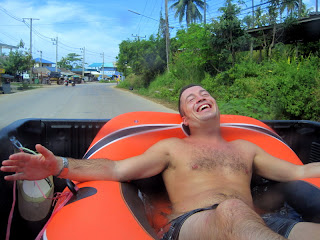 Ethelred the Unready re-filled the inflatable pool in the trunk of the pick-up truck. Denzel, Luigi, and I hopped in the vehicle, and we were off! Destination: the lighthouse at the very Southern tip of Ko Lanta, Thailand.

The British boys were on their tenth 80s mix CD since they departed Bangkok a week ago, and the synthesizer bass of “Take on Me” oompah-ed the hot metal of the truck as we rolled down the dirt road.

“This tune is AMAZING!” moaned Denzel as he bopped his head to the beat. 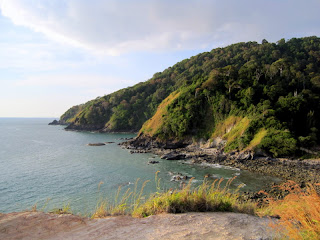 From the back of the car we heard some sloshing and banging and turned around to see Ethel dancing around in the trunk pool.

Just then, Luigi rolled the truck to a stop and we all stared ahead at the dark shapes sprinting back and forth across the road. “MONKEYS!” hollered Ethelred, intensifying his watery dance before leaping out to snap photos.

“Hey Luigi,” said Denzel, “Did you ever end up going to that Monkey Circus yesterday?” 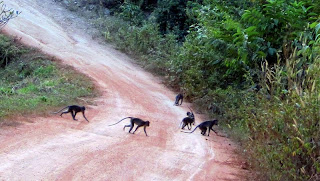 “Oh, it was BRILLIANT!” replied Luigi. “Turned out it wasn’t a circus at all, but rather a Monkey SCHOOL.”

“Exactly!” said Luigi. “When I came in, one monkey scampered right up to me and stole my camera, and it was on Record Mode so I have the whole burglary on tape now! Of course, it took a while to chase the little bugger down and get my stuff back… oh yeah, he also stole my sunglasses.” 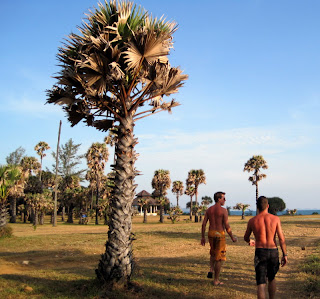 “Sounds like that “school” does a terrible job of discipline,” murmured Denzel.

At last we neared the entrance to the National Park which contains Ko Lanta’s lighthouse. There was a gate halfway pulled up right in front of us, and to its side was a Park Ranger booth with a helmet lying on top, and a sign saying we should pay the entrance fee there.

“Sawaddee ka?” I called tentatively into the sun-lit emptiness. “Hello?” But minutes passed and not a soul emerged. “On we go then, I guess,” we said, and chugged gaily forward.

The park was an utterly deserted Eden. This is all the more odd because it lies a mere one hour boat ride and half hour drive from the hordes of tourists fighting for one vomited-upon dorm bed in Ko Phi Phi. 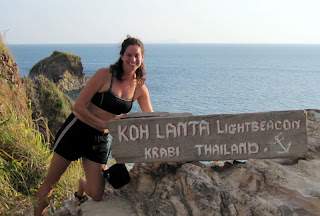 Silhouetted against the endless miles of sapphire sea we saw the lighthouse high above. But to reach the peak, first we had to go through the guardians: one hundred terrifyingly spiky-trunked trees! Look at this photo to the upper left… have you ever seen such fear-inducing foliage?? But on we pressed.

A completely empty crystal beach curved around like an arm beckoning us onward. Photos could not capture the extent of the ocean’s expanse ahead. Up upon the rock path we began to climb. I hung back and snapped photos of the intrepid climbers. 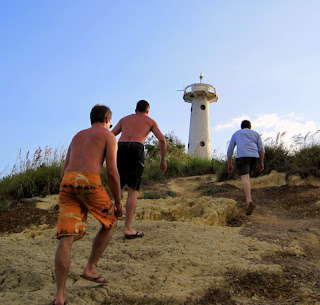 I wondered: when King Ethelread the Unready was slaughtering Danish settlers in the year 1002, did he every imagine that a young Brit bearing his name as a nickname would be climbing a cliff on an island in Thailand? I think not.

“You a’right there, Ethel?” I heard Denzel call from below to his friend.

“I’m just not READY to reach the top!” Ethel responded in perfect deadpan.

But we did at last reach the top, and glory be! To our right, Irish-style green hills curved softly into the ocean, looking fuzzy enough to cuddle. Straight in front, blue stretched upon blue upon blue until it reached the gentle pastel of the sky. Right below us, a sign declared, “Ko Lanta Light Beacon”.

“Ooh!” Luigi squealed, “Let’s take a photo with it!” One of us who shall remain nameless then leaned upon it, neglecting to realize it was totally unattached to the rock it was sitting upon, and nearly causing a thousand-foot tumble onto the rocks below. Let’s thank the kind blue ocean Gods that we escaped that episode! 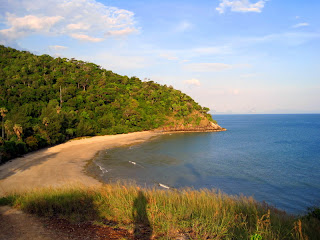 “How long do you suppose it is until this island is “discovered” and destroyed by terrible tourists?” Denzel asked with a sigh as we gazed onto the pink-gold beach below, not a soul in sight.

“Maybe it will never be destroyed,” I said hopefully. “Maybe the locals are organized and clear-headed enough to keep the reigns on this tourist beast!”

“Don’t kid yourself,” said Ethel. “Just be glad we saw this when we did.” 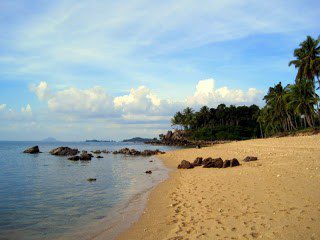 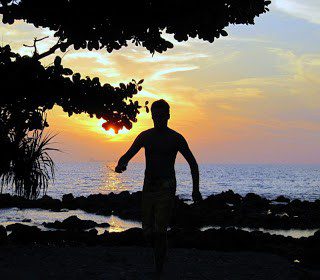 In College and SEAsia: The Danger of Your Own Demons
Read Next Post →
Click here to cancel reply.