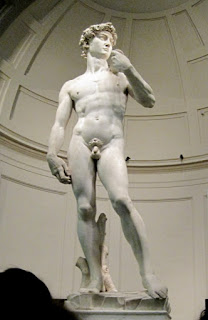 We all fell in love today. How could we not? Michelangelo’s David is stunning.

You see the photos everywhere, and you don’t really care. Meh– just another curly-haired naked dude, right? But listen: if you pay the ten Euro entrance fee to actually see Michelangelo’s David sculpture in person, you WILL feel as if you’ve gotten your money’s worth, and more.

Here is a smattering of guidebook facts and overheard quotes from the two hours we spent staring at The David and its surrounding museum (after waiting in the hectic line pictured to the right):

1. Michelangelo carved The David when he was just twenty-nine years old!!!

2. “If the biblical David was Jewish, why isn’t this statue circumcised?” 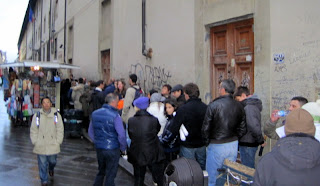 5. Since “Michelangelo didn’t make mistakes,” all David body parts would appear in perfect proportion if placed high on the Duomo where the sculpture was originally slated to stand.

7. Now there is a plexiglass shield around The David because in 1991 some maniac hurled himself onto the statue and began chipping off the toes! He was dragged off and the curators did their best to fix the mangled foot. 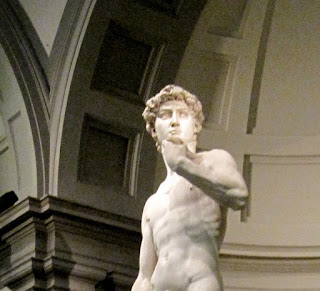 9. The David was carved from a ridiculously large eight-ton slab of marble that two other sculptors had already started carving and rejected. “This stone is impossible to do anything with,” they scoffed.

10. “The David demonstrates the perfect mix of tension and ease… look at how one leg is taut and the other bent!”

11. The Renaissance focus was the power of the human mind, and thus David is pictured in thought, rather than in action.

12. “I am obsessed with the curve of his jawbone and his smooth, smooth face skin. I want to kiss it!”

13. The David was removed from its pedestal outside after an anti-Medici riot in 1527 smashed off one of the sculpture’s arms. A rioter threw a bench out a window, it snapped on the sculpture, and apparently the statue’s giant marble arm crashed down on some poor guy’s toe! It was later glued back on. 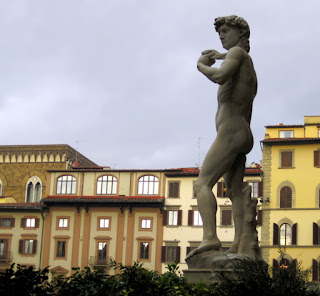 There is a meticulous copy of The David outside now where the original stood (pictured, rigth), but the real deal is the one shown in all the other photos here, which is housed inside the Accademia under a stunning dome constructed just for David.

14. “It is ten billion times more amazing to see the real David, inside its dome, than to gaze at the copy outside. Supposedly they are exactly the same, but one is magic and the other is stone!”

15. It has been said that The David is such a perfect sculpture, that once you’ve seen it there is no need to ever see any other sculpture.

16. “How could one artist have been so incredible? To sculpt this masterpiece AND paint the Sistine Chapel, AND do all the other things he did? I think he even wrote poetry! Amazing.” 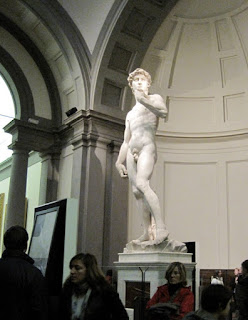 17. After it was completed, one of the fat cats funding the sculpture complained to Michelangelo that David’s nose was too big. Not missing a beat, the sculptor climbed up to the giant face, pretended to chip away, and threw down a handful of marble dust he had secretly hidden in his palm. When he climbed back down, the patron nodded in approval and said: “Much better. Now you’ve really brought it to life.”

18. “The sticks behind him kind of annoy me. I think they’re there to support the statue, but still, they get on my nerves. Stupid sticks.”

20. “Quick– stand in front of me and shield me while I sneak a photo!”

22. Various prudish popes tried to cover The David’s nudity in various ways. Now, however, he’s loud and proud naked, and tons of vendors outside the Accademia sell aprons, boxers, and postcards emblazoned with the crown jewels of the crown jewel of Florence. 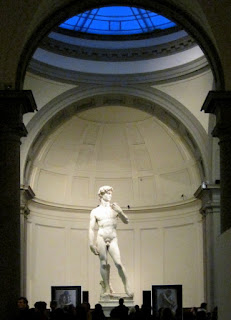 24. His eyes have heart shaped pupils! The purpose is to add a spark of life by creating the illusion of glinting light, but one person mused: “Does this mean he’s in love?”

25. Question: “On a scale of one to ten, with ten being total manly hunk, where would you rate The David?”

Response: “He’s not as handsome as you, of course.”

Happy New Year to you all, and may two thousand and ten be full of happiness, health, gorgeous sights, and adventure!