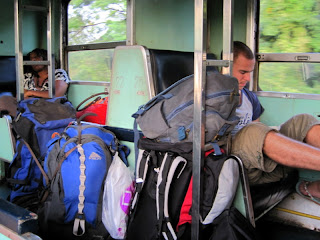 In “Some Like it Hot”, the 1959 comedy ranked the #1 funniest movie of the past 100 years, Marilyn Monroe and her fellow busty “girl band” members have a rollicking party in the top bunk of a sleeper train.

Minute by minute, more ladies squeeze into the minuscule space, each hauling with them another batch of bootleg hooch and maraschino cherries. Poor Jack Lemmon is not only stuck in drag, but his romantic aspirations are totally foiled!

I was kind of expecting the 15-hour sleeper train from Chiang Mai to Bangkok to be like that. 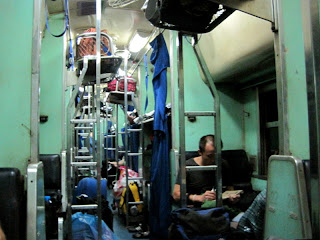 It wasn’t, but it was good it its own way. In fact it was great!

Jackson messaged me on Couchsurfing.org to introduce himself last week, and when we realized we were both going south to the capital, he suggested we take the train together. “Wahh,” I whined, “But it’s 580 Baht ($17), and the bus is less than 300!”

Jackson looked me square in the face and said, “Do you really want to be living in fear for fifteen hours wondering when your bus will make its next bathroom stop?” 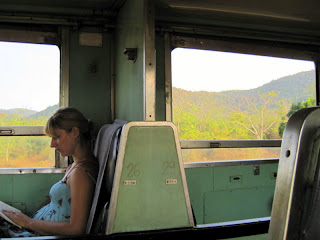 So we bought the train tickets. (Or rather, Jackson generously offered to pick them up while I was taking my final massage exam.) By three in the afternoon, we were snugly in our blue cushioned seats, window yanked all the way down so the wind could whip through the narrow aisle.

“They’d never allow a giant gaping window like this in America!” I mused, forever fascinated by the danger permitted in less litigious societies.

“You really think some idiot in America would fall out of this thing and sue?” Jackson asked with disbelief. 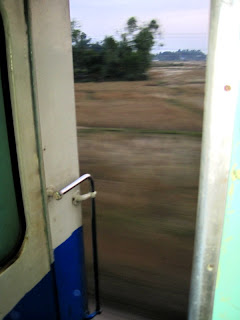 We were both silent for a moment, remembering the incident where a U.S. woman burned herself with hot coffee and sued for a truckload of money, thus forcing all future American takeaway beverages to be emblazoned with the warning: “Caution: HOT!”

We chatted, I crossword-ed, we pondered life and dreams both aloud and silently, and then I went to the bathroom. To get to the bathroom, one must cross between trains, and if I thought the three foot tall open widow was dangerous, the six-foot tall open door was that times a zillion. Careful handrail hold, one foot after the other, and then: the bathroom! No wait– that was the shower. (Shower?!) 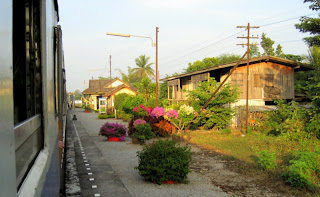 I pushed open the next door, and a metal squat toilet winked beckoningly. The toilet opened straight onto the tracks, and I could see the earth zipping by beneath us. It was here that I had my third Thai toilet epiphany of the week: you are supposed to face the WALL when you squat, in a reverse of a Western toilet! Oooh. Whoops!

I returned to our seats and Jackson asked me, “Isn’t it nice that they have a Western toilet, too?” 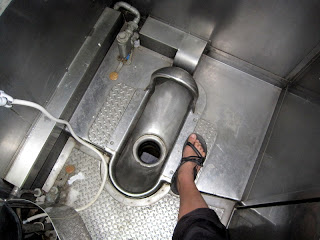 For $150 Baht, we were served a piping hot, freshly cooked dinner of pineapple, green curry, soup, rice, and shrimp with vegetables on a little table, and it was so much better than the dried noodle cups we had planned on eating.

We did, however, demolish our bag of pistachios, and Jackson decorated a bunch with smiley faces. These nuts cheerfully kept watch on use all night and morning. (Photo, left.) 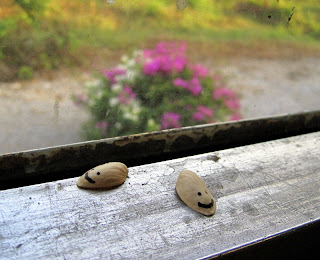 Soon a kind and efficient train attendant came around and magically presto-changeo-ed the seats into two bunk beds with laundry-sweet sheets, pillows, and blankets!

My bed was amazingly comfortable. Everyone in the looooong dorm room that was our train car swished their blue privacy curtains shut and had a lovely snooze until the train pulled into Bangkok at six in the morning. Well done, train!

Jackson and I bid each other “hasta luego” as he want to catch his next 20-hour train and boat combo further south, and I zoomed into the tourist heart of downtown Bangkok by magenta cab to check into the excellent, inexpensive hostel that Jackson had recommended. 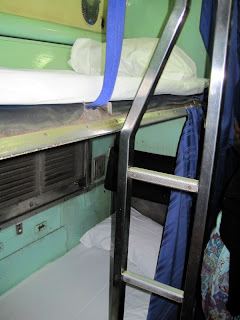 And then came the moment I have been waiting for: my triumphant trip across the city to Bangkok’s Embassy of Ghana to apply for my Ghana visa!

I sat alone in front of the locked embassy on a blue plastic chair I found in the street for a long time past the supposed 9:30am opening time, staring at the locked door.

“You want massage?” asked a workman walking towards the four massage parlors behind the consulate of Ghana. 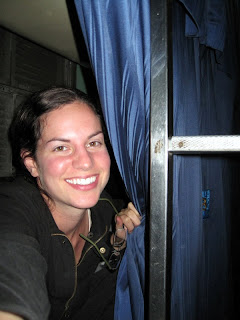 At last a good Thai samaritan walked off the sidewalk towards me.

“You waiting for consulate?”

“Yes!” I said eagerly, hoping this man was an employee ready to grant me access to the famed friendliest country on earth.

“You come back tomorrow,” he said. “Holiday today! Not open. All stores closed for birthday of King.”

“Holiday?!” I gasped, stunned at my ridiculous luck/poor planning. The first time I went to get my Thai visa in Hanoi a few months ago, THAT embassy was closed to celebrate a DIFFERENT Thai king’s day!!! Oy vey. They love their kings here. 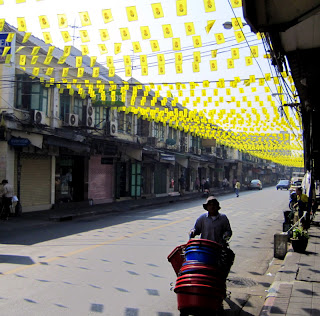 I suppose I should have known something was up from all of the yellow banners fluttering in the sunlight.

So I waited a bit more for good measure, then suppressed my sniffles and took a cab back to this cafe from which I now write, grumbling about how each of the taxi meters is rigged differently, meaning my journey back from the embassy cost almost double what it cost to get there. Bangkok, you little devil, you…

Tomorrow, I will try for the visa again. We of the teacherly sort must believe in the power of will and persistence to make a desired result reality!

And really: if Marilyn Monroe’s entire girl band could fit in the top bunk of a sleeper train, the odds are in my favor that I can get my entrance visa to Ghana.

Ah, the foreign land's holiday. Never been on the road long enough to really get nailed with this one, but it sounds brutal.

Now the sleeper train seems luxurious. Your own little curtained-off compartment? Sounds like a brilliant way to get from A to B. If I can ever tear myself away from my dog for long enough (we're based in Taiwan), it's still near the top of my list (along with Bali and a return to Malaysia).

But I'm curious where you're teaching now? I've been living in Taiwan and teaching ESL to Chinese-speakers here for 8 years. I'm curious what else is out there, from a personal experience perspective.

Chris Richardson said... I had a similar thought to the train windows being wide open when I was in phuket.

Looking at the mass of what they call power lines and the everyday step ladder leaning on them as the guy fixed a short.

I imagined being that guy for a second before scaring myself to death :)

sondiedance said... I love how you take pictures every step of the way so that we feel like we were really there with you! I might have to start doing that! Love your blog so much!

All you need for the endless photos is a small camera and a small netbook computer and a USB cord (all listed in the Amazon box on my right sidebar)... but beware that it all becomes a dangerously addictive habit. ("Wait! We can't start eating until I document the food!" Snap, snap...)