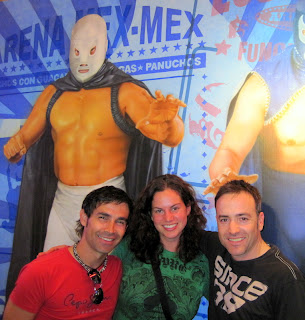 Two Cubans and an American walk into a Mexican restaurant in Spain.

Is this the start of a really bad joke?

Nope! It’s what happened last night when I met up with the childhood friend of my former Boston Public Schools coworker in Madrid!

The three of us: two Cubans and an American, ate nachos and drank Spanish beverages while discussing Cuban politics– until I got yelled at for asking too much about Cuban politics and eating too many of the nachos.

But at least I wasn’t the one who spilled the water glass all over the table by wildly gesturing with the rainbow-colored wooden menu on wheels!

This is one of those moments that gives you a zingy thrill about the power of our globalized world. 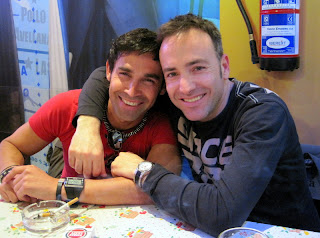 My former co-worker Vicente left Cuba to create a happy life in Boston and start a beautiful family.

Hector has a sweet apartment in Madrid, emblazoned with the Cuban flag. Ernesto is voluntarily flying back to Cuba today.

The owner of that Mexican restaurant in southern Madrid (be he or she Spanish, Swiss, or Mexican) is making a ton of Spanish people and tourists happy with his beans and tacos and kitchy wall decorations.

Me, soon I’m flying home again to Boston after nine months of flying everywhere else but home. 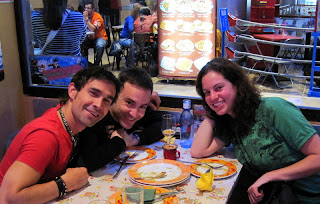 Travel may be brave, but immigration is one of the bravest things out there!

This article really makes that saying "This is a small world, and getting smaller" true. Because you probably didn't expect to see an old friend during your long vacation.

...a delightful example, Drew, of when punctuation is essential to meaning...

Waaaait...who's Ernesto? I only see two cute Cubans, not three :(

Good God, the one in the red shirt is absolutely beautiful!