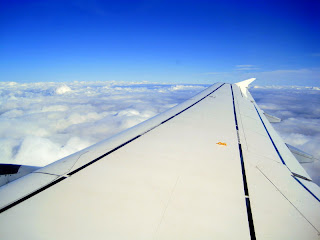 I nearly fainted right there in the Madrid airport when my G-mail Inbox flickered open and I saw its contents.

Fifteen hours earlier, I had flown out of West Africa, leaving behind my beloved friends and coworkers at Youth Creating Change of Ghana after three stunning months. The flight from Accra to Frankfurt was six and a half hours and I slept for a groggy three. My layover in Germany was two hours.

It took two more hours to fly to Madrid, Spain. When I arrived, bedraggled, the sun had just risen above the snow-capped hills (I didn’t realize Madrid had surrounding hills!) and I wasn’t sure if it was today, or yesterday, or both at the same time… but I did know that my head was a swirly smush. I began patiently waiting for my dear brother to reunite with me to fly to Portugal. It was then that I had the bright idea to use an internet kiosk. 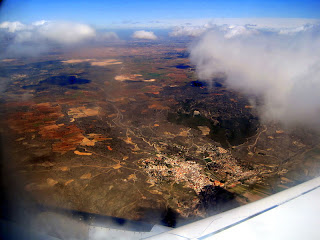 HOLY COW! While I had been squished on a plane in Economy class eating bread and ham sandwiches, four things had apparently happened:

1. AroundTheWorldL.com was featured as the Blogger.com “Blogs of Note” blog of the day!

2. An interview with me appeared in the popular Boston Globe website, Boston.com!

3. As a result of this publicity, Google Analytics reveals that 1,514 readers visited this very blog in a single day! My previous highest-ever record was 400 readers. Amazing!

4. A heated debate had launched under my Boston.com article about my funding, motives, and character… and someone had professed their love. Meanwhile, my Gmail inbox was jam-packed with wonderful messages of support from friends, family, and complete strangers. 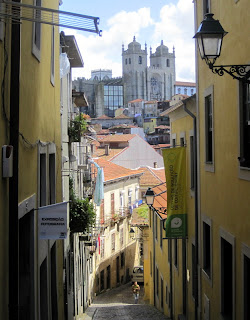 I was shaking with so much emotion as I boarded the inter-terminal airport bus that I hardly noticed the 6’6″ man walking past me towards a free seat.

“HEY!” we both screamed at the same time, hurling into each other’s arms. It was my brother, David! HAPPINESS!

Since that joyful reunion, David and I have hopped a flight to charming Porto, Portugal (pictured, left… isn’t it pretty?) to launch our week-long Portuguese adventure. Already, I feel less dizzy and more whole, thanks to having my brotherly best friend here.

So this is all to say: changes are afoot. I am hugely thankful for this burst of publicity, and for all you wonderful new and old readers. Let us belt out a massive “Hurrah!” for change, progress, and growth in the lives of each and every one of us!

Photo Note: The first two photos of this article (taken somewhere high over Spain) are dedicated to the students and staff of YCC Ghana who kept asking: “But what does a cloud look like when you’re actually right above it?”