X-Mas Eve: Stopped by Police for a Fruit 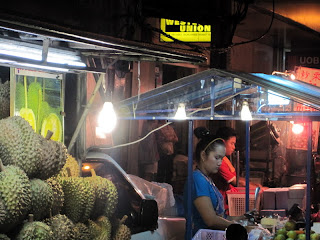 It was Christmas Eve in Bangkok when the Skytrain policeman strode up to me and pointed to the plastic bag I held.

So it was true! It IS illegal to carry durian fruit on the train!

After some protesting on my part, the policeman finally took four plastic bags and wrapped them tightly around the already saran-wrapped carton of durian.

Yet… the smell still reeked on. The cop glared at me and stalked off as the train slid into the station. 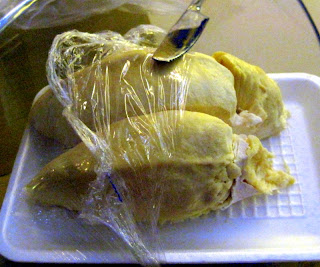 Durian is known as the “King of Fruits,” and my friend Kathy had dared me to buy it from one of the many street vendors and put a piece of the gold flesh into my mouth.

Spiky, giant, scary King Fruit durian is indeed! Look at the terrifying photo, above, with the fruit’s spines nearly stabbing the camera lens! Wikipedia states: “Wearing a hard hat is recommended when collecting the fruit.”

I got on the Skytrain towards Chong Nonsi station, shielding the quintuple-wrapped stench-monster under my arm. Alas, people noticed the odor immediately. Garlic, cheese, sharpness, fire, mustard, rotten pumpkin… The schoolboys with their blue and white little suits scooted away towards the far side of the train car and giggled while they gagged.

“I’m a bad person!” I sobbed inside. “Shh!” I wanted to hiss to the durian, moving into a dream world where you can shush a scent. The eight stops from Kathy’s neighborhood to mine crept by interminably. 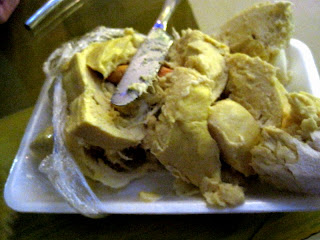 “No I cannot eat durian now,” said sweet Ngor, of the Lub-d staff when I arrived at the hostel and begged her to take the fruit from me. “I have just drunk coffee. In Chinese medicine, there is hot and cold, yin and yang. So in Thailand, too, we believe that both durian and caffeine represent hot, and therefore it is unhealthy to mix them.”

“What represents cold, then?” I asked, desperately offering my plate of durian to every other soul who walked in the lobby door. Ninety percent of the people literally ran away.

“The fruit mangosteen represents cold,” Ngor explained. “Durian is the King and mangosteen is the Queen.”

People either worship the taste of King Durian, or they abhor it. 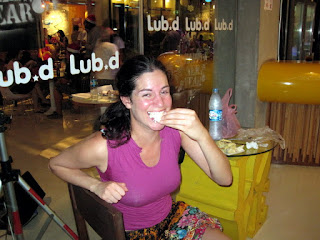 “A rich custard highly flavoured with almonds gives the best general idea of it, but there are occasional wafts of flavour that call to mind cream-cheese, onion-sauce, sherry-wine, and other incongruous dishes.”

Culinary writer Richard Sterling explains the durian a bit differently: “… its odor is best described as pig-s***, turpentine and onions, garnished with a gym sock.”

“Don’t smell while you eat! Hold your nose!” hollered Ngor as I tried to choke down the fruit for Ping’s camera.

How I would describe the taste of durian: chicken-garlic soup, done wrong.

I left the Lub-d Hostel staff the rest of the fruit and went off to re-book my flight to Ghana on an airline whose engines have fewer instances of catching fire. Shout-out to STA travel for G-chatting my flight permutation requests for over two hours! 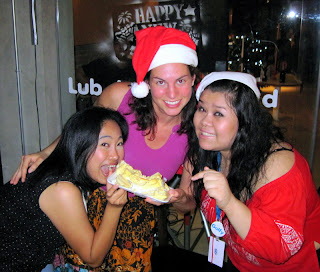 So that was my Christmas Eve, 2009: I spent some of it with Kathy eating Japanese food and talking girl talk, some of it joking around with the Lub-d staff, and some of it getting stopped by the Bangkok police for eating a fruit too stinky for the subway.

And you know what? This day has actually been lovely! Part of why we travel so far and so long is to shake up the ways we’ve always lived, worked, thought, and celebrated. It feels invigorating to be changing things up. It also feels delicious to be able to use this modern technology to holler to you all, with my durian-smelling breath: “May your holidays be happy, healthy, safe, and fun!”

Ways to Meet Other Solo Female Travelers, and Why it's Essential
← Read Last Post

Bangkok Signs to Make You Smile While I Fly to Italy
Read Next Post →
Click here to cancel reply.

Man. I love durian. Just had some this morning, in fact, and just had a Durian Frapuccino at a cafe here in The Philippines. I will miss it as I leave SE Asia. I didn't like it the first time I had it, but it grew on me in a big way.

Because I'm in love.. and love makes you do crazy things!

I like the taste of durian as I think of it as sweet and creamy even though every single time I eat it, my dad tells nasty stories. :( He once told me the nasty story of how the durian was invented to scare me into not eating it. -.-

The story is about a king who lost all his people while traveling. So when he was walking through the desert, he saw a tree with fruit. The king really needed to go to the restroom so he just released himself under the tree, causing the tree's fruit to be smelly. I think my dad made it up. When he told it, I was laughing.

You should go to china town and go to Vietnamese sandwich shop in front of boa boa bakery order a Durian bubble tea and you will fall in love!

Wow who knew that it could ever be illegal to have something smelly on a train and at a further extent a FRUIT!

That was an amusing story. What was your protest against the policeman? I find it kind of cool how they believed in yin and yang. I can't believe they even apply it to fruits. I looked up mangosteen. I wouldnt have expected it to look like that. I honestly thought it would be a cousin of the mango. It looks like a garlic in a coconut. Ms. Marshall, I think you should make an article on mangosteen. I'm interested to know more about these foreign fruits.