Do These Details of My Havana, Cuba Trip Surprise You? 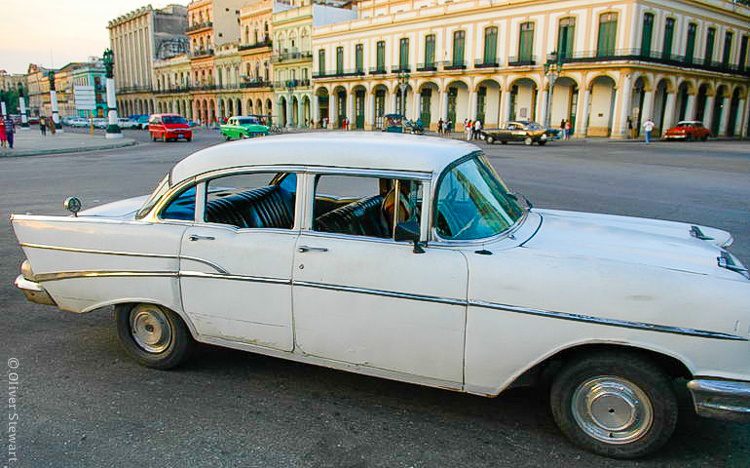 As the possibility of Cuba opening fully to U.S. travel emerges, I keep thinking about my 2008 trip to that alluring island. Through these photos, let’s explore the surprises I saw in Havana, and what they suggest about Cuba’s future. 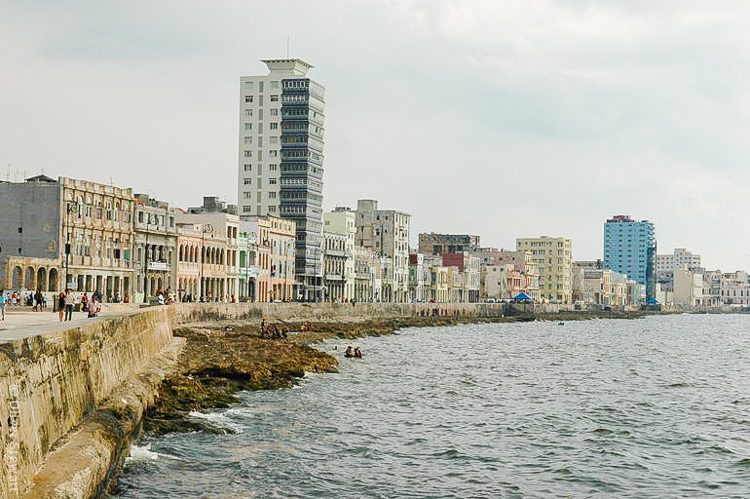 When Cuba opens, how will this Havana waterfront be developed?

First on the list to change if Cuba opens is Havana’s waterfront, pictured above, with a close-up below of one house’s faded glory. “Ah!” a friend exclaimed when she saw these pictures upon my return to the U.S. “Americans will have a field day renovating those buildings once they can get their hands on them!” 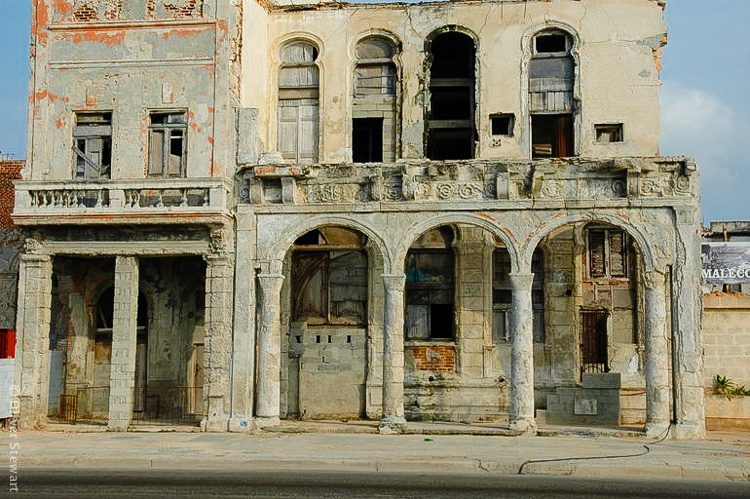 A Havana home with lovely bones.

This sentiment elicits polar reactions. Some people hear this and think, “Great! Havana’s buildings will become safer, and will actually get some use instead of just sitting and looking bombed-out.” Others, however, gasp, “Will Havana lose its character and become Disney Cuba? Don’t mess it up, developers!” 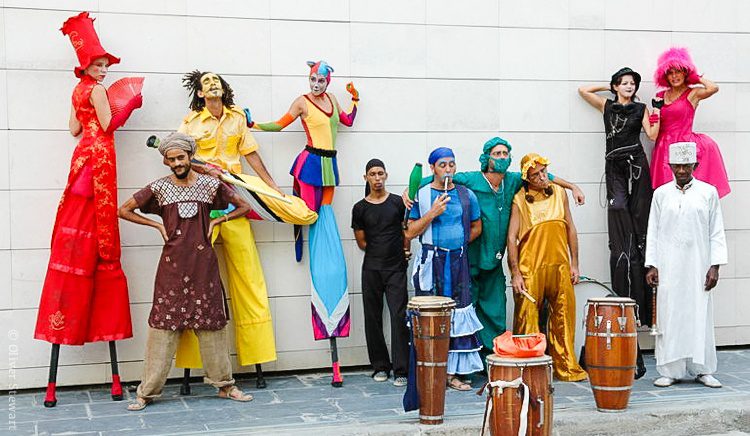 Me, I remain optimistic after seeing how Puerto Rico was able to fix up Old San Juan, while still maintaining its gorgeous historic character. See this article for photos of how well Puerto Rico renovated. Why am I not one of those people who is against Cuba opening? Because of sights like this photo, below: 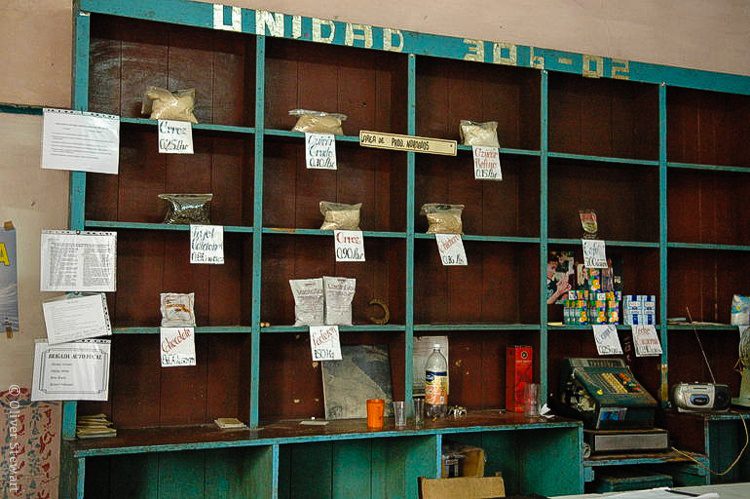 The startling photos above and below this paragraph are a rare glimpse inside a Cuban food rationing bodega. Communist food rationing was alive and well in Havana when we snapped these pictures, meaning that each Cuban is allotted a specific (small) amount of food staples each month by the government. Read this article to learn about the complicated Cuban rationing system in detail, but know that the bottom line is that the lack of choice, and lack of ability to amass money and goods represented by these stores would drive the average American nuts. 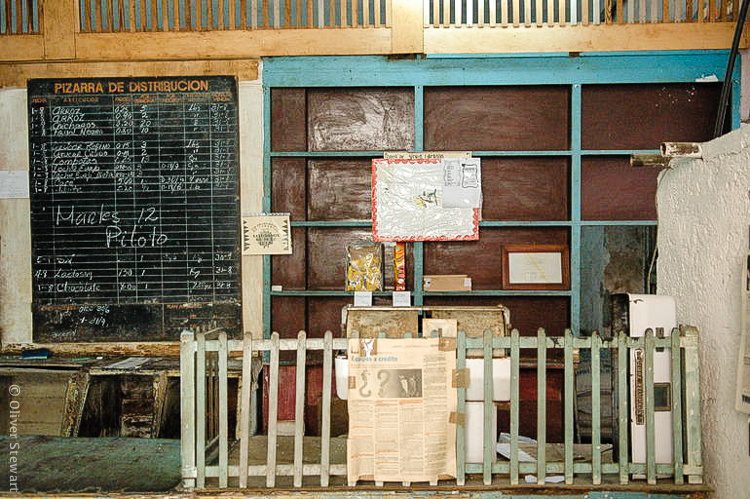 The distribution chart in the ration store.

Indeed, the Cubans we built trust with during our trip confided to us that the rationing system drove them crazy, too. What’s wrong with the government wanting to make sure everyone eats and no one is desperately poor? Well, it turns out that in many ways, it violates human nature, particularly if it results in the majority of people on the island being sort of poor, sort of hungry, and sort of bored. 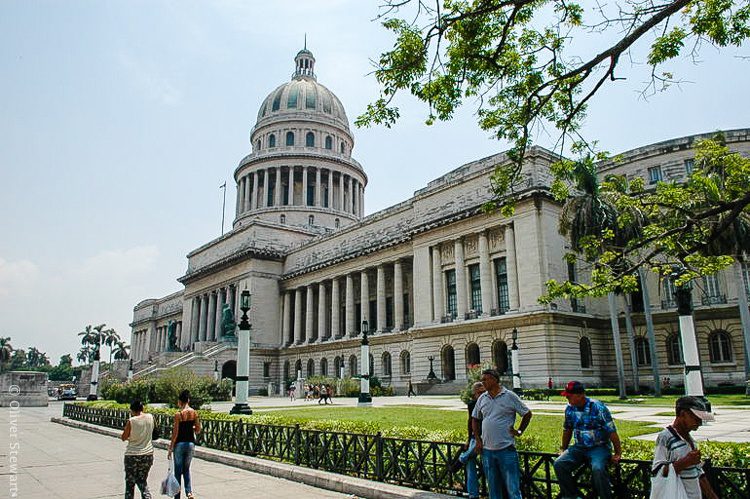 The capitol building in Havana. Grand!

A word I’d use to sum up the emotions of Cubans I spoke with on the island would be: “Frustrated.” The people we met yearned to earn, spend, choose, travel, surf the web (yes, the Internet was hardly existent, and severely tamped down by the government when we visited in 2008), and do all the things that they knew people all around the world could do, but they could not. 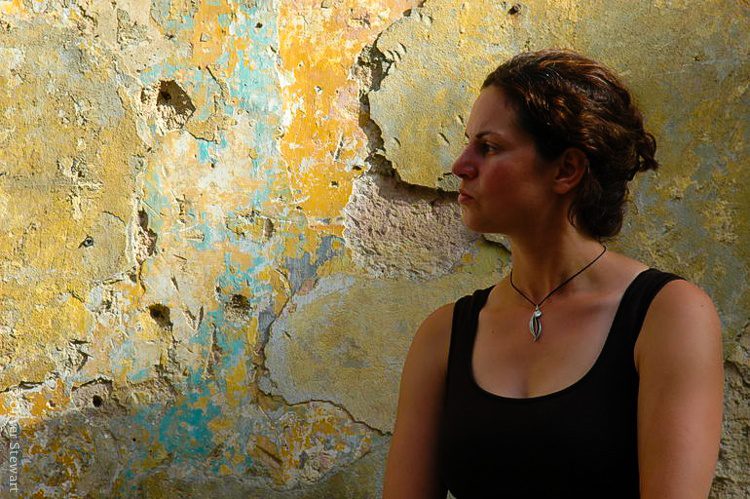 Me looking pensive by a weathered Havana wall.

This brings us to a discussion of the parallel economy for Cubans versus tourists. Now, just because there have been few Americans allowed by our government to travel through Cuba for 50 years, it doesn’t mean there haven’t been tourists visiting from everywhere else. During our time on the island, Oliver and I saw hundreds and hundreds of visitors from around the world. 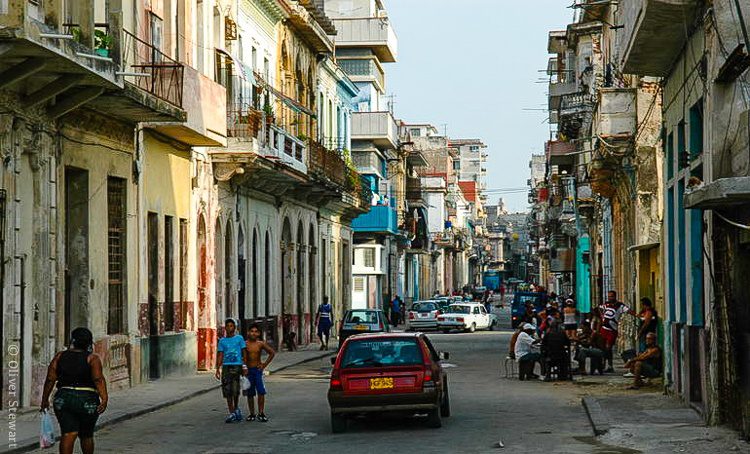 Here’s what astounded me: tourists use a different currency than Cubans! The spirit behind this is positive, because the idea is that Cubans earn less (due to the Communist nature of jobs in Cuba) and thus should have special money which allows them to buy life’s staples affordably, while tourists have higher prices that match their presumed much higher net worth. 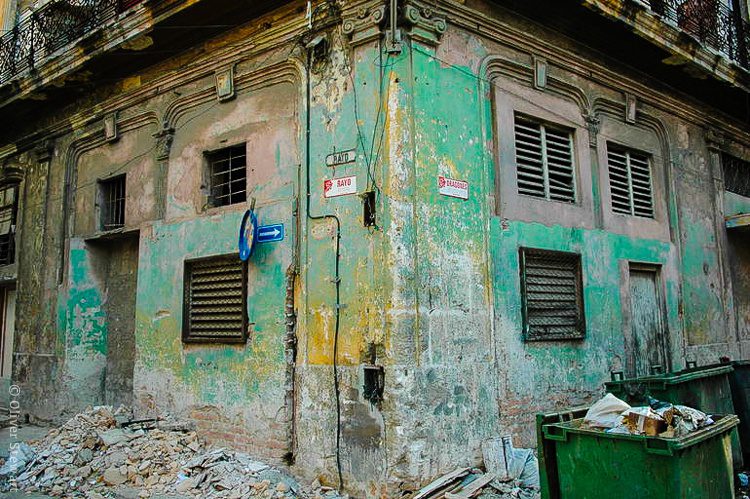 Parts of Havana were beautifully maintained, but many looked like this.

The problem with this two-currency system, however, is it means that tourists have become the gleaming upper class of the supposedly “classless” island. What’s ended up happening is that tourists have become able to buy amazing goods and experiences (luscious meals and five-star beach resorts), while, if they play by the rules, Cubans and their Cuban currency have been blocked from these luxuries. 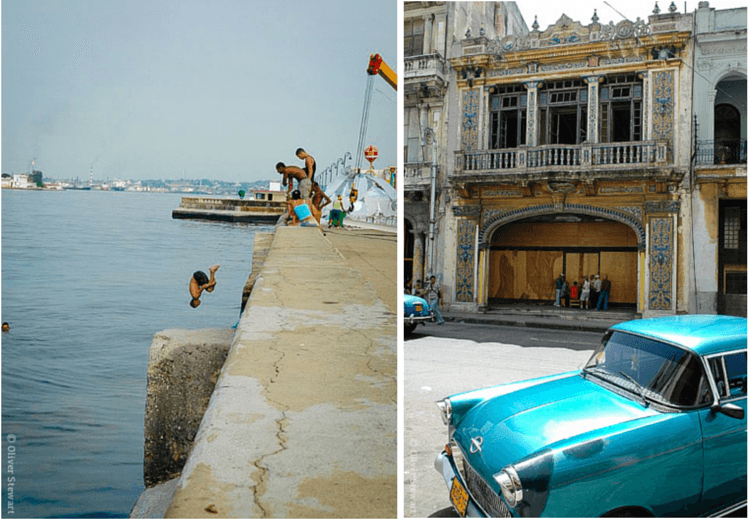 Ahh, Havana: A kid diving head-first into the sea, and a classic car in front of an ornate relic of a building.

This connects to another shock of our Cuba travels. Though it’s no longer an official law, authorities frown on Cubans hanging out with tourists. Again, there is a supposedly positive reason behind this upsetting element: the Cuban government is well aware that tourism brings in key revenue, and thus is committed to keeping all visitors safe — something that is particularly vital in a place where economic levels are so different between locals and visitors. Indeed, this commitment was great in the sense that we felt very safe our whole Cuba trip. 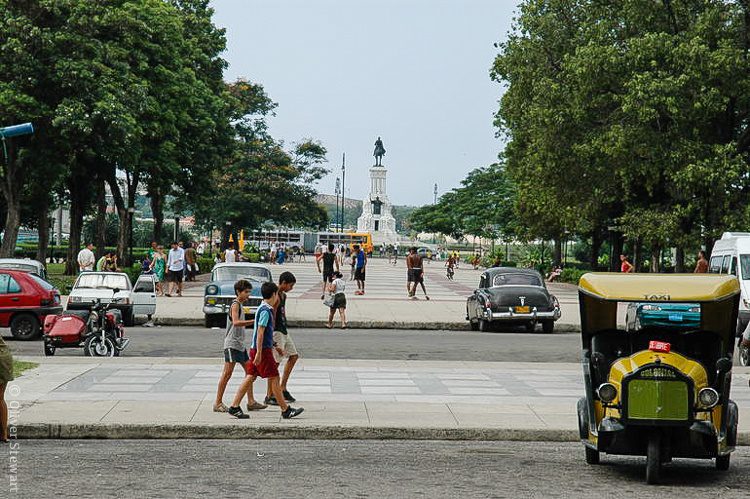 A beautiful, wide plaza in Havana.

Unfortunately, however, evening after evening in Havana, police would stop us and ask to see the papers of the darker-skinned male friends we were walking with. It so happened that these new friends were Mexican, and the moment the police saw this in their passports, they apologized and walked away. Since these men were in Cuba long-term for medical training, they had grown used to being stopped by police, but Oliver and I were appalled. What would have happened if they had been Cuban men? 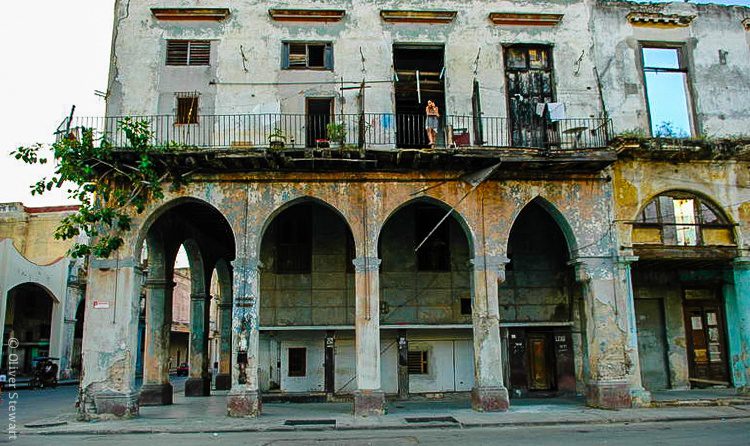 The broken-down beauty of Havana, Cuba.

On to another shock. In the official Museum of the Cuban Revolution in Havana, I gasped (and — I admit — also giggled) to see the wall display pictured below: a “Corner of Idiots” showing highly unflattering caricatures of George Bush and Ronald Reagan (er, “Ronaldo Reagan”) and making fun of them on the official museum plaques. Wow! 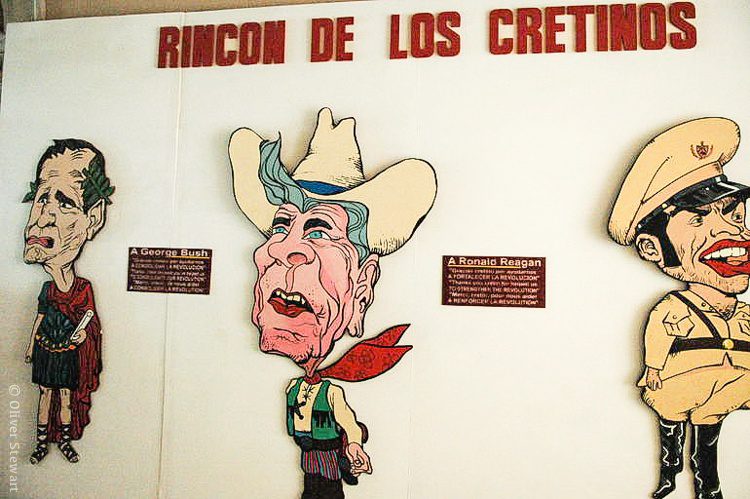 A display in the Museum of the Revolution in Havana mocking U.S. presidents.

Then came a surprise that I ought to have seen coming: There is a Chinatown in Havana, Cuba! See two photos from it, below. “Duh, Lillie,” I exclaimed upon seeing it, “It’s smart politics for a communist powerhouse like China to have an enclave in the communist country right next to the capitalist king, America. Strategic!”

Chinatown (“Barrio Chino”) in Havana, Cuba? Why, of course!

When we asked a few Cubans about the “Barrio Chino,” they explained that the Chinese had been investing markedly in Cuba’s infrastructure in the past few years, though there weren’t many actual Chinese people hanging around Cuba’s Chinatown. Speaking of people of different racial backgrounds, I do want to point out to those who think Cuba is an island of light-skinned inhabitants that the island actually has a large Afro-Cuban population. In the photo below, you can see the range of skin tones on the island: Black on the left, White on the right, and me in the middle, representing the race called, “Awkwardly Tall!” 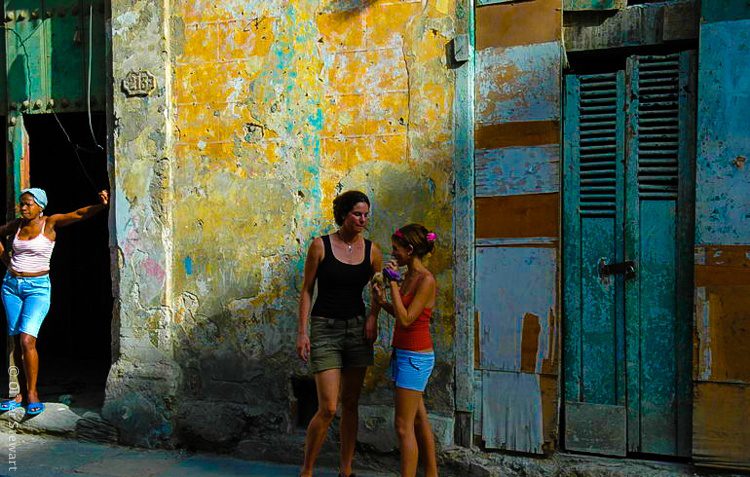 Me looking huge next to our Cuban buddy.

At this point, I’d like to give a special shout-out to my Cuba travel buddy, Oliver, pictured below. Readers have been very excited about my Cuba travel series, and have asked how I knew all the great places to go. The answer is that Oliver had traveled to the island before, and thus knew all the best destinations. If you are planning Cuba travel, I HIGHLY recommend arranging for someone knowledgeable to show you around like Oliver did for me. It makes a world of difference!

Oliver: My Cuba travel buddy (and the man behind this set of photos!) at a famous Havana restaurant.

As this article draws to a close, let’s return to the question of what will happen to Cuba. What I hope this article has highlighted is that Havana is hungry for change and for new opportunity. There is massive potential for happy and responsible growth on the island. 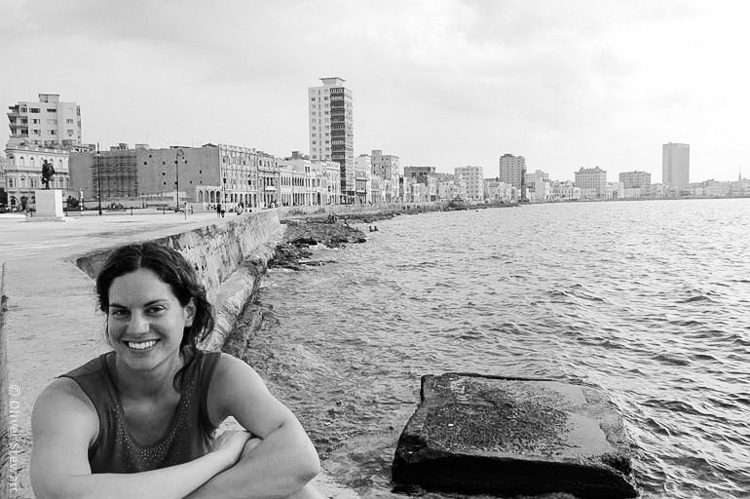 Me by the oceanfront of central Havana.

So what do you think? Are you surprised by the photos and experiences in this article? Do you have extra information or ideas to add? Do share! 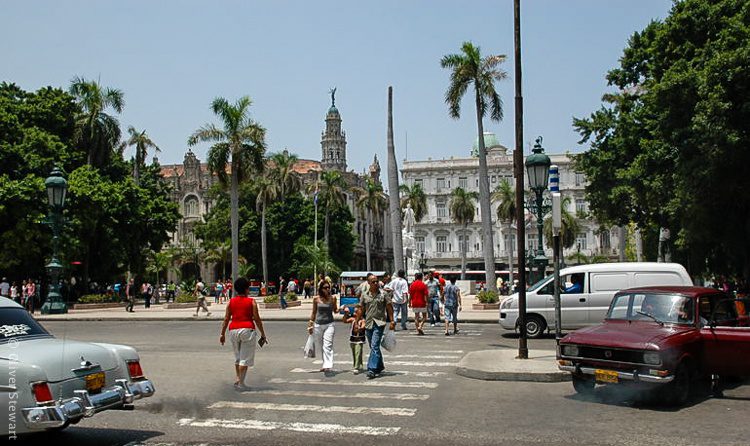 What will be the future of Havana, Cuba? 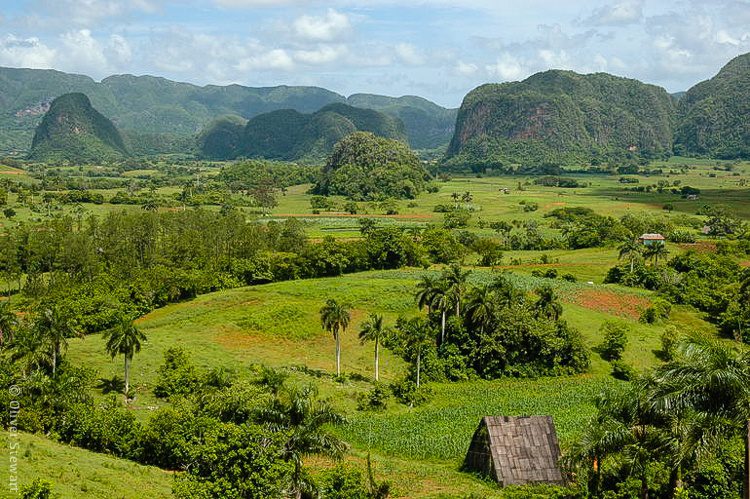 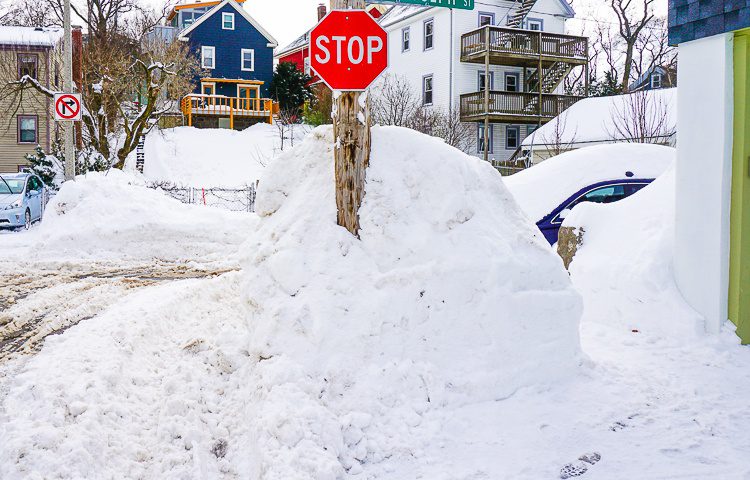 Just re-discovered this post and showed it to some friends at my local coffee shop â€“ we were all entranced!

Something that I learned from this article is that the government controls the food that each person can buy for the whole month. Also, I learned that Cubans can't hang out with tourists when they go to visit Cuba. I wonder how Cubans can live like that when the government is controlling their food.

Something that I learned from this article was that Cubans cannot spent time with tourists. I learned much more but I was more into that sentence. I was so surprised by all of the information, but especially that Cubans cannot hang out with tourists. I from Dominican Republic and they are such different places. In D.R. we can buy the amount of food with want but Cubans can't, so that is really sad. But at least they have food, which is really good.

Great read Lillie. Although I love the wall of idiots myself. I think there should be more politicians along side them. haha But seriously great balanced article on the struggles of Cuba. Let's hope all the changes are for the better. I think people have learned that restoration is the key, not tearing down the old and putting up new. Let's hope they renovate, but keep the charm. People deserve to have comforts and happiness. Shabbiness isn't charming. but history is amazing, so I hope they keep the historical element while giving people clean, safe and comfortable buildings to live and work in. It's going to be interesting to see the changes that happen.

Really well said, Deb. Thanks for reading and commenting!

It's very important and crucial for countries like Cuba to remember that they could keep their cultural legacy while entering the modern world. those who are absorbed by the prestigious countries' culture are the one ignorant of theirs. I also hope that Cuban authorities try to keep their own culture while take advantage of the modern technology and learn about other cultures.