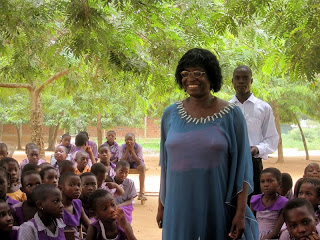 You are about to read the story of Madam Agnes Appiah: a remarkable woman who endured years of forced child labor in her youth, and went on to found and direct Living Faith School and Home for orphaned and deprived children in Ghana’s Volta Region.

All photos accompanying this article are from an academic competition held this week at Living Faith.

Here is Madam Agnes’s story in her own words.

“I was born in Tamale, in the Northern Region of Ghana, in 1958. My father was a civil servant and my mother was forced to marry him at the age of fifteen, as was custom. When I was two years old, my father told us to move to my mother’s Volta North hometown while he stayed behind to work. 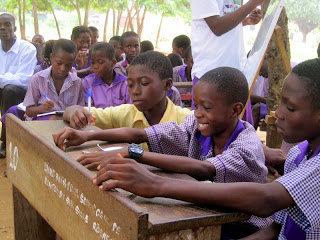 Once we arrived in the village, my mother asked someone to write a letter for her to her husband. My mother was illiterate– she could neither read nor write– so she did not realize that the person she had asked for help was actually an enemy. The “helper” went on to write a letter to my father with terrible words.

When my father wrote back to tell my mother that the marriage was over, my mother was so shocked that she went mentally crazy.

My mother and grandmother couldn’t find money to take care of me, so when I was three years old, they gave me to a woman in a far away village who wanted a maid.

I grew to school age, but the woman said that I could not go to school. I should just be a maid and take care of her house and children. 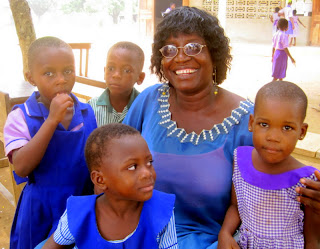 Each day, I was forced to climb a mountain to farm, then climb back down to sell the vegetables all over town. In between, I would clean the house, cook, and care for the children. And yet I was just a small child, myself!

I didn’t even know where my mother and grandmother and siblings were. If I cried too much, I was beaten. I was suffering so much, but I was cornered and could not be free.

One day when I was selling vegetables, I walked by a school. The lady who was teaching kindergarten bought some food from me and asked, “Why are you not coming to school? Tomorrow, don’t sell. Instead, come here.” I told her I couldn’t. I kept selling, but the words of that teacher stayed on my mind. 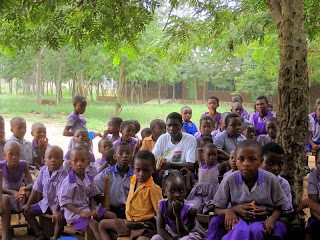 Later that week, I went back to the school and stood outside the window to listen. The children were chanting rhymes and poems. I began standing by the classroom nearly every day, and bit by bit I began to learn.

But back at the house, the family screamed any time they heard me practicing poems, “Keep quiet! You are not going to school– how did you get this?” All the same, I returned to the school to learn whenever I could.

The teacher began to notice me, and one day she asked to see the house where I was living so she could formally enroll me in school. I said, “If you come to the house, they will kill me. Don’t come at all!” 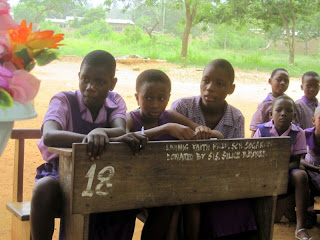 The teacher replied, “Children should be in school, not selling. I will come to see your guardian tomorrow.”

When the teacher arrived at the house, my heart was jumping out of my body. I knew punishment would soon come. After the teacher asked the woman in charge of me why I was not in school, she left. Right then and there, my caretaker threw me on a bed and began cutting me with her fingernails, screaming, “Why did you tell the teacher those things?”

Bitterness and sorrow fell into me, but I had no way out. I could not go running to my mother for help, because she was in a far place. Nowadays we call what happened to me “child labor” and “child abuse.” 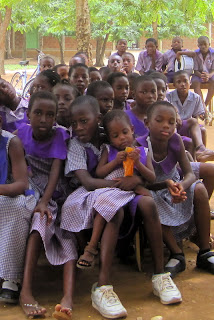 One day, a woman who knew my grandmother came to town and recognized my nose and my tribal mark. She journeyed back to my grandmother and told her, “Your granddaughter is suffering. She is wearing a torn dress far too large for her, and she is forced to sell all day.”

Thank God, when my grandmother heard this, she came to take me home. Because my family still had no money, I had to work selling firewood and cocoa to pay my school fees. But I realized: I needed education no matter what.

Why did I need education? It was clear to me that the reason why we had all fallen into this terrible situation was because my mother was illiterate. And so I said: “I will go to school until I am torn apart!”

Now that I am grown, I run this school and home for children who need help as I so desperately needed help back then.” 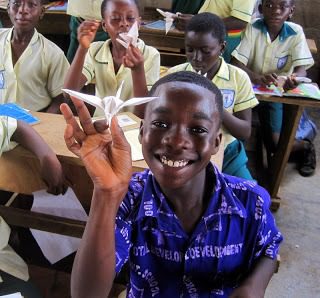 The Joy Factor in Teaching, in the Form of 41 Birds
← Read Last Post 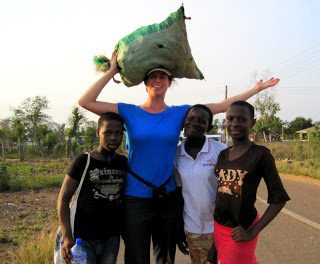 Wow, I can't imagine being taken away from my family at such a young age! She had a a lot of responsibility placed upon for being such a young girl. I am glad she has found success in her life.

This is why I have to go to college. So I can be very successful in life. This shows you why education is needed.

nodebtworldtravel.com said... Such a powerful story and why education is the best tool against poverty and crime. When you put yourself in the hands of another, you never know what will happen. Your best interests are never addressed.

Luddy Sr. said... I am not exaggerating when I say that Madam Agnes is one of the most interesting and powerful people I have ever met in my life. She tells these horrible tales of her life all the while flashing her warm smile that is apparent in the photos above and with no bitterness. It's truly incredible. And now she is helping children avoid being treated similarly by taking them into her wonderful school. This woman truly is a blessing to her community. And I'd be remiss if I didn't mention her skills as a cook. Do whatever you can to get yourself invited over for lunch. It might be your best meal in Ghana.