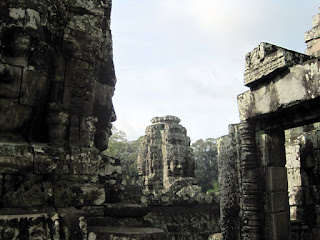 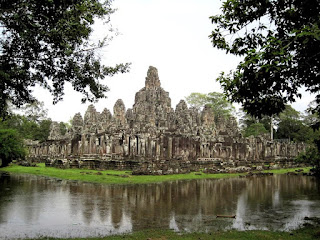 Bayon… At first it looks like a mountain-sized pile of stones. Then you realize– holy heaven!– there are over two hundred faces watching you from every surface of the temple!! 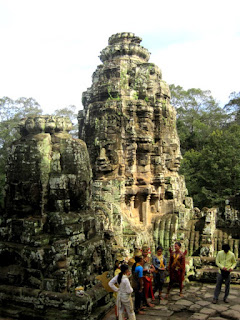 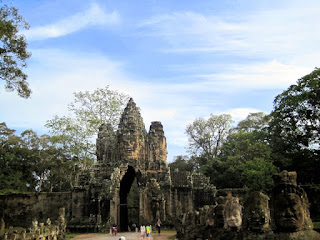 Look carefully at some of the photos or click to enlarge them. Can you see them looking back at you?

That gate would have made a good teacher! 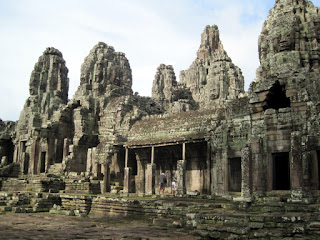 Banteay Srei is called the “Woman’s Temple” because its carvings are so gorgeously ornate, it is said they must have been crafted by a lady’s delicate hand. 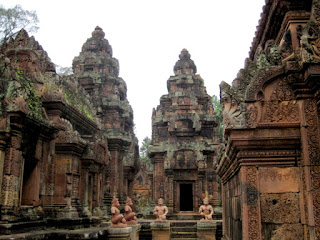 I particularly liked the saucy monkey statue meeting at the middle!

It is shocking, given that 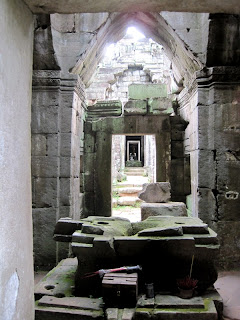 these precious temples were built between the ninth and fifteenth century and are in somewhat shaky shape, that you as a visitor are allowed to tromp on so many of the stairs, passageways, and ledges. 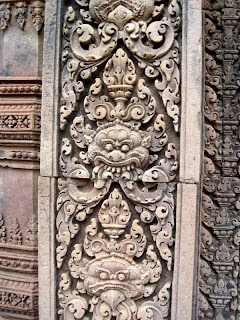 Sometimes you look to your right and see that the entire passageway is filled with collapsed giant stones.

Sit where you like and ponder existence. Notice there is at least one active 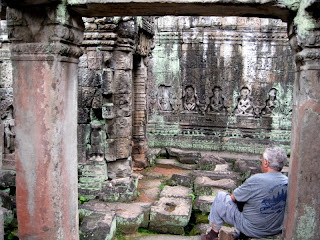 Everywhere there are stairs to climb, 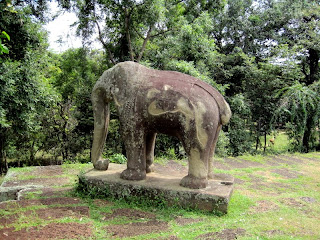 but each step is only three inches long, and the steps stretch up sometimes hundreds of feet!

The view is worth it, though.

Most of the temples are Buddhist, but some started out Hindu. 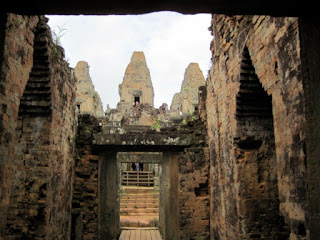 There are plenty of elephant sculptures, which always brings a smile. And then there are linga.

Do you know what a “linga” is?

And much of Angkor Wat is dedicated to honoring both the linga and the yoni (female counterpart). 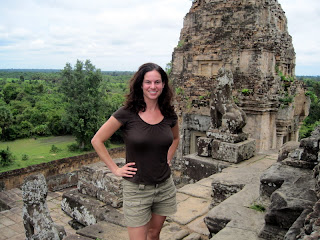 Emerging from a jungle path, I saw a Cambodian couple being blessed by a monk with water that had been poured over an ancient linga sculpture and caught in a yoni sculptural cup. This blessing was– you guessed it!– to bring fertility. 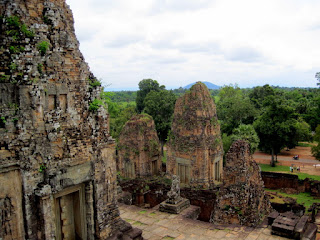 Over a hundred stunning temples, all built when New York and London were nothing more than mud huts. 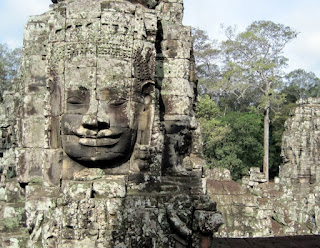 Siem Reap (the town next to the temples, in which nearly all tourists sleep… including me!) means “Siam (Thailand) Defeated” in Khymer.

This refers to the fact that the Thais took over and occupied Angkor Wat for centuries before they were defeated and driven out.

The fact that the town still bears this diss of a name demonstrates how fiercely Cambodians love Angkor Wat. And with good reason!

Found your site and wondered into Cambodia posts. From there I came looking for Angkor Wat. Fond memories of visiting all the temples in the area. It was pre-DSLR days for me, so though I have many photos I wish I could go back now and take them all again. Such a great place. Get to Angkor Wat at sunrise to see the bats. Thanks for posting the info and your photos. Happy memories.

Siem Reap is one of my favorites. We've never been scammed there, the people are very friendly and the ancient temples and culture is really awesome. I would love to visit it again someday.

So glad you had a good experience!

Hi Lillie, I love your blog and especially the part on the Cambodian trip. Lately I also visited Cambodia and I would like to share something amazing I got to live. Coming back from a full day of temples visiting my tuk tuk took a different road (the one behind the national museum) and we came across a circus. Loving circus I decided to go and see one of their daily shows. It was simply one of the best circus shows I have ever seen: breathtaking stunts, great story, enchanting music, funny acting. Just great. On top of that, the circus is actually a social business that finances a circus school in Battambang, which I unfortunately did not visit. Anyway, this is definitely a must do in Siem Reap.

I love your travel stories and your photos are terrific. Best wishes for forthcoming baby time.

Have to say I was shocked to read your comment about London in your Siem Reap article: Over a hundred stunning temples, all built when New York and London were nothing more than mud huts.

London has been a significant trading centre since Roman Times. In the Middle Ages it had over 100 churches and Westminster Abbey was begun in the tenth century. London grew in wealth and prestige such that by the 16th century it was one of the biggest cities in the world, certainly in Europe. It would be more accurate to say that the brilliance of English medieval architecture - mostly now visible in the thousands of exquisite medieval churches, with at least one in virtually every village and town - was contemporary with the building of the temples of Siem Reap.

I loved Cambodia - and the temples are absolutely stunning. But England was developing its tradition at the same time.

Sorry for the rant. I didn't know I felt quite so patriotic!

Totally justified! As a teacher I strive for accuracy, but clearly failed in this article. Thanks for the correction, and thanks for reading and commenting!

The temple is beautiful. The culture(s) behind the temple is both funny and amazing. The faces are carved with such care.