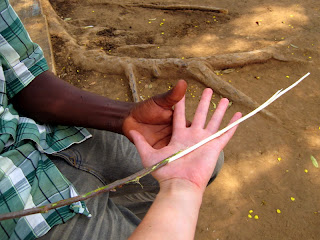 (Note: All photos for this article were obtained by walking to the closest school today and saying, “I’m an American teacher and have never seen a punishment cane. Can you show me how it works?” It may seem bizarre to be smiling in photos about corporal punishment, but here, the whole affair is discussed with levity.)

“How many of you were beaten with canes by your teachers TODAY?” I asked the YCC students as a logical follow-up to our class discussion on corporal punishment in Ghana.

What?! I gasped. These were the loveliest, most well-behaved students on earth! “Why did your teacher cane you?” I asked, aghast. 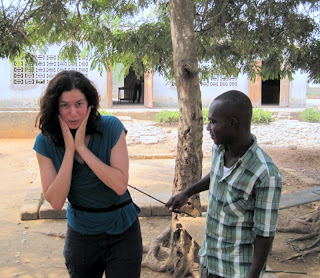 They went around the circle and shared.

“I didn’t bring my homework.”

“Where do they hit you when you get caned?” I pried.

“Oh anywhere,” said Esteria, smiling shyly, “your back, your arms, your… buttocks.” Everyone giggled.

“So what do you think of this practice?” I asked. This was fascinating.

“Well, it’s good and bad,” replied Reuben. “It’s good, because it really teaches you a lesson, and it keeps the class well-behaved. It’s bad because sometimes you are crying so hard afterwards that you cannot concentrate on the lesson.” 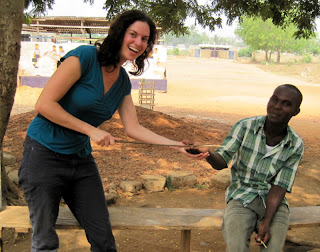 For all the outcry this may cause in America, I have to admit: I see both sides of this issue.

In my years teaching in corporal punishment-free Boston, I’ve watched an awful lot of detentions and suspensions and calls home be utterly ineffective.

And the truth remains: I have never worked with such kind and well-behaved students in my life as I have this month in Ghana.

“The government of Ghana is starting to phase out caning,” explained YCC Administrator, Oliver. “Now there are other physical punishments like forced exercise, or making a child squat on the ground while crossing his arms and holding his ears for as long as the teacher says.” 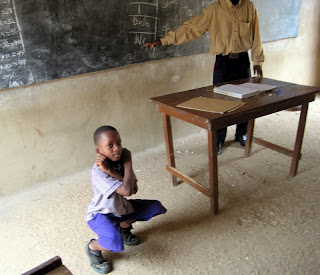 Today as we were visiting the local school, one student was kind enough to demonstrate this punishment, pictured, right.

But the stark differences with American schools don’t stop here. In Ghana, there is also the concept of a “Student Prefect.” Apparently, one student is assigned the role of “Prefect,” and it is his or her job to write down the names of all of the chatty or disobedient children in each class. At the end of each day, the Prefect gives this list to an administrator, and the administrator beats these children with a cane.

Imagine being that Prefect!

“Sometimes the Prefect gets beat up on the way home by people he has reported,” admitted one student today. “Or sometimes he abuses his power and will put the name of his enemies as disobedient and his friends as well-behaved.” 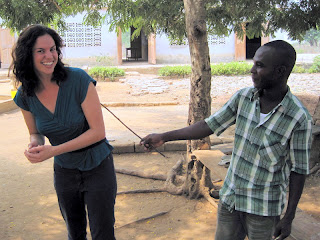 “Make sure to put some of these details in your penpal letters to America,” I directed my YCC class, chuckling and shaking my head. “Your American friends will be shocked.”

“Really?” asked one girl incredulously. It’s hard sometimes to believe that other parts of the world are as different as they are.